by Rebecca Francis
in Bowhunting Posts
0 0
A A
10 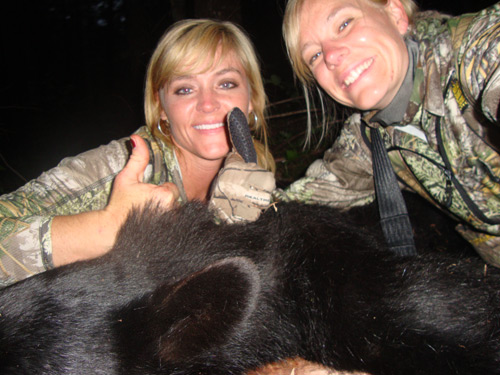 Amy and I with the black bear

I was all alone deep in the Bitterroot mountain range too exhausted to care what may lurk outside my tent. I was in an area so densely populated with black bear, that it was a two bear tag area. It was the last week of the spring black bear hunt and I was determined not to go home empty handed. I had already been there for a week with my husband and children. But my husband had to return home to work and I did not want to go. I talked my resistant husband into leaving me there alone for the week without a truck, so I could give my full attention to getting my Idaho black bear.

The first night after my husband left, my girlfriend Amy drove out from Lolo, Montana to join me and film the hunt. We snuck quietly into the tree stand. I had been hunting from this tree stand for over a week so I felt right at home when I climbed the tree, hung my pack and folded my jacket for a pad so my rear wouldn’t hurt from the small metal seat. I was used to sitting as still as I could so I fell into a pattern and tried to not move an inch. My eyes scanned the area for any movement.

I could hear the trickle of water in the stream off in the distance and could smell the moisture in the air from all the heavy spring rain. I listened for the occasional chatter of a squirrel hoping to alert me of an incoming bear. It was so quiet and tranquil. I was spellbound by an elusive black fisher that played on the logs below me for nearly an hour. It was so silent I could hear myself breathe… then there he was.

Out of nowhere a beautiful bear, black as midnight, stood below my stand. He knew something wasn’t quite right and slowly circled my tree several times. I didn’t even dare to breathe for fear I would spook him. He stood on his hind legs and sniffed the tree where I sat, searching intently for the unfamiliar scent. I didn’t move.

After thoroughly investigating the area he decided he was safe and began to settle down. The black beauty milled around with caution. As he turned away from me, I very slowly drew my PSE bow back and settled the string in the familiar groove against my nose. I looked through the peep and set my first pin just behind his shoulder. I knew he was about 14 yards away, because I had ranged the area before he moved in. I held my breath and released. The Gold Tip arrow and Shuttle T broadhead flew perfectly and hit him right through the heart. He ran about 25 yards and fell making the distinctive death moan. I didn’t realize until that moment that my heart was pounding so loud I could hear it. I looked over at the tree stand where my girlfriend was filming and she had a huge smile on her face giving me the thumbs up. I wanted to jump for joy, but I knew I needed to stay calm in case a second bear came in. 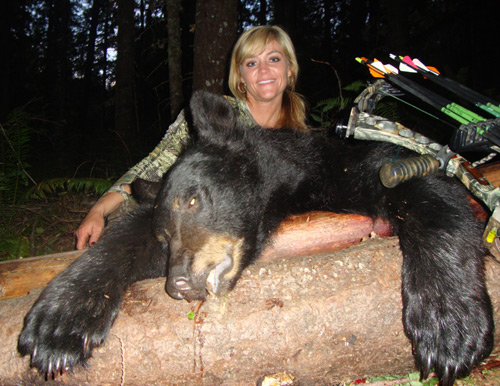 We saw a couple more bears that night but nothing else came in close enough for a shot. When darkness settled in we climbed down the tree. I knew we had a big job ahead of us and to make it worse, a storm was rolling in. We quickly took some pictures then tried to drag the bear to a flatter area out of the thick, wet bushes where I could work on him. Amy held the light as I donned my plastic gloves and began to skin the bear. It was a very dark night and sure enough, it was starting to lightly rain.

I was busy skinning the bear when a branch broke nearby. My head jerked up and Amy’s light turned swiftly toward the blackness. We could hear movement, but could see nothing. I decided now was a good time to pull my .45 semi-automatic 1911 out of the pack. We began to talk a little louder with the hope that we would scare whatever was out there. We continued to hear twigs snap as I most definitely completed the quickest and messiest skin job of my life. I quartered the bear and hung each quarter in a nearby tree. I loaded the entire hide and head of the bear into my backpack and Amy carried all the equipment in her pack. We had to hike out and it was getting late. We concurred that we would retrieve the meat early the next morning.

It was well after midnight when we finally reached Amy’s truck. I was tired and knew I would sleep well that night. It was also late enough that Amy didn’t want to make the long drive back to Lolo so she decided to camp with me. The next morning, I was happy to find that the meat had not been touched. We hauled it back to the truck and Amy took it with her back to town after the next evening’s unsuccessful hunt.

It wasn’t long after Amy left that I was sitting all alone in my tent and I realized I left my backpack in Amy’s truck. There was no cell service and my .45 pistol was in my pack. I knew I probably wouldn’t need it, but I also knew I would sleep much better with it sitting next to me. Relieved, I thought, no problem I still have my bow. No I didn’t. I left that in her truck as well.

All I can say, is I must have been really tired that night. Once again I thought, well at least I have my knife if I really need it. After looking through everything, I realized I had left that too. I resigned myself to the fact that I would have no protection that night. I also knew that is was highly unlikely I would ever need it. I actually slept quite well and after waking up the next morning, (since I couldn’t hunt with out a weapon) I took a nice bath in the river and relaxed until Amy showed up later that day with my gun, bow, knife, and everything else I should have had with me.

I stayed the rest of the week, but never got my second bear. This however, would rank right up with one of my favorite hunts ever simply because it was just us girls the night I got my bear. I also very much enjoyed my time alone on that hunt. In these quiet moments in the mountains I had the opportunity to reflect on all the amazing blessings I have in my life. It is also a time to reminisce about all the incredible adventures I would never have known had I not had such a profound passion for hunting.

NOTE: Be sure to follow Rebecca’s Quest for the Africa Big Five right here on Bowhunting.Net.: My Quest:  The Beginning