Have Bow, Will Travel Tour Rolls On 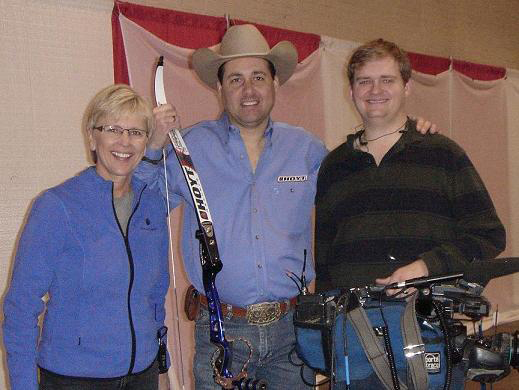 Frank with a TV news reporter and camera man. This is a common practice at appearances and media interviews go with the job.

2011 is off and running and my schedule has been full! It’s been a good run of shows thus far and I’m looking forward to our March dates. My Hoyt Formula RX bows are shooting well and I have added a Hoyt Buffalo to the line up. I got it recently and hit a baby aspirin with it a few weeks ago at a show in Ohio. Response to this new bow has been good from bowhunters and I am always happy to let them look at it and ask questions.

At a show in St. Paul, MN I did six TV news interviews, had a large story in the Star Tribune by well known outdoor writer Dennis Anderson, and sat in on an on air radio interview with a popular radio sports show. That’s a lot of media coverage for one show, and the ratings were close to one million viewers for the TV coverage alone. The early morning interviews meant little sleep but it was worth it to get the show this added attention. We have also had some big meet and greets after the shows which I always enjoy.

I have good news about my long awaited book. I began writing it in 2003. The book has evolved and I have filled it with anecdotes and snapshots that I think everyone will enjoy. I met with the printer recently and I estimate that the book will launch in the Fall. This is exciting news. Awhile back I wrote the intro for “A Million Arrows”, a book Ted Nugent is doing and Ted has agreed to write the foreword for my book. Chuck Adams has also agreed to write an intro. I have a special quote that Fred Bear hand wrote for me in the 1980’s that will appear on the inside cover of the book. Even as a teen I thought someday I’d write a book and when I asked Fred he agreed. This means that some of bowhunting’s top people will be in the book, which is cool. We will announce the book’s release here first, so watch Bowhunting.Net for more info.

I have also been using my time between shows to write some questions for more celebrity interviews for the “Celebrity Interviews” Rich Walton and I have been working on. Ted Nugent, Mike Stegar (Fred Bear’s foster son), George Gardner, Don Clark and many more planned for the future! When you look at some of the celebs we’ve been able to interview, and the fact that many of these are gone now, these interviews are historic. Sadly we’ve lost some giants from the sport in recent years but I am content to say that before they passed away we were able to publish interviews with Glenn St. Charles, Dave Staples, Ann Hoyt, and Doug Walker. Sadly we missed getting one with Bill Krenz before he passed away, but his writings leave a good legacy for people to learn more about this great man.

In addition to writing the book and working on columns, I have also been booking shows for summer/fall 2011 and winter 2012. It’s a year round job. It seems I am either on stage talking about archery, at my desk writing about archery, or on a phone talking archery!

This summer I’ll be back at Deerassic! This is a HUGE event and has been called the Woodstock of hunting. It’s a great time and last year 15,000 watched me perform on the big stage, thanks to Jumbotron screens across the grounds. We have many other appearances scheduled, so when we visit your area be sure and come by the show! I will also be back at the World Deer Expo in Birmingham this summer, so don’t miss this exciting show either!

I want to thank you for reading my columns, Bowhunting.Net, the promoters and show organizers who book my shows, and most of all – thanks to all of you who come out to see my show! I wouldn’t be able to spread the excitement of our sport if it weren’t for you! March marks a special anniversary for me and I’ll tell you more about that soon. In the meantime, Adios & God Bless.