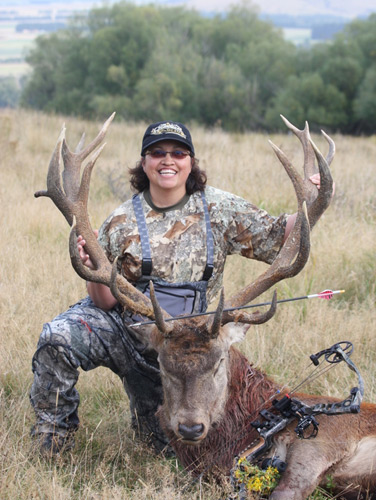 I upgraded to the Matthews Passion bow, Sure-Loc Lethal Weapon sight, Texas Boar Bracket, Epic camera, and the Atoms broadhead. I began to physically and mentally prepare for what I anticipated to be the hunt of a lifetime.

Ten months of waiting and preparing to hunt a red stag in New Zealand was finally over on March 26, 2010. After a wonderful fourteen hour flight, I arrived in Christchurch, New Zealand and my quest of hunting a red stag was now taking place. My guide and owner, Scott Thomson of Southern Hunting Safaris greeted me at the airport.

Upon leaving the airport, Scott decided we needed to have lunch and discuss our strategy for the hunt. We decided the best way to devise a plan of attack was to visit one of New Zealand’s local alehouses known as Speights. While I was being introduced to fish n chips and one of New Zealand’s stubby beers, Scott informed me that the stags were roaring and that my first day of the hunt would be the most crucial since it held my greatest chances at success. As we left Christchurch to our final destination, I was introduced to the beauty of the Canterbury Plains. The lush green fields and the majestic mountains confirmed why these magnificent species, known as red deer, reside in this region of the world.

When we arrived at our accommodations in a small quaint town known as Fairlie, Scott’s Mum named Ann greeted us. As I walked to the porch to greet Scott’s Mum, I heard a sound that I did not recognize coming from the countryside. For that one moment, my feeling of jet lag was gone as I heard Ann say, “Did you hear that roar? That is a Red Stag. That is what you will be hunting tomorrow.”

My gracious hostess gave me a tour of her lovely home and informed me that a hot Jacuzzi lavender bath was awaiting me. Once I was settled in, Scott said he would be by at seven o’clock in the morning to pick me up for the first day of the hunt. Even though I was mentally prepared for the hunt, my body was only looking forward to the comfort of a bed.

Early the next morning while I was getting ready for the first day of the hunt, I could hear some sounds coming from the kitchen. When I opened the kitchen door, the wonderful aroma of Ann’s cooking greeted me. She had an array of pastries, cereal, juices, fruits, yogurt, and of course bacon and eggs. She said, “Good morning, hope you slept well. Breakfast is ready and Scott is on his way to pick you up.” Her delicious hot breakfast was definitely something I would need since the weather was serving cool temperatures with a light mist of rain that morning.

Scott arrived and introduced me to another one of his guides, Grant, who would be guiding another hunter. Since the weather was a little gloomy, we decided to shoot a couple of arrows to make certain that my equipment was working fine after the long flight. Scott picked up his bow and we headed off to kill a few hay bales. After shooting a few arrows, Grant could no longer resist the urge to draw Scott’s bow. Watching Grant pull a 70lb. compound bow for the first time will always be one of the highlights of my trip to New Zealand, thanks mate! However, Grant was a natural when it came to the Sarrel’s recurve bow. Finally, after harvesting a few trophy bales of hay and having a few laughs, we were ready to go red stag hunting.

On the drive to the hunt, I still could not believe that my dream of hunting New Zealand was becoming a reality. When we arrived at the area I would be hunting, the scenery that surrounded me overwhelmed me. However, the sudden roar of a red stag startled me and accelerated my hype for the hunt. Scott did some glassing and found a few red stags on a nearby hill. He said, “Take a look at those stag, would either of them work for you?” I quickly answered, “Absolutely, I would have a big smile on my face if I harvested one of those red stags.” He said, “Well, let’s go call one in for you.”

Since the stags were on another hill, Scott decided we would make our way into a willow tree bottom that was at the foot of the hill. All I could hear as we made our way towards the willow trees was the roaring of the red stags answering Scott’s call. Upon entering the willow trees, signs of a red stag bedding area could be seen everywhere. The willow trees had endured some heavy torture from the stags as they brutally tried to rub the velvet off their massive antlers. Scott placed me behind a fallen willow tree since it provided great cover. This location would give me a thirty-five yard shot maximum if a red stag came to his calls.

Scott positioned himself about twenty yards behind me and began to answer the stags roar. As I patiently waited for the opportunity to present itself, all I could think was I sure hope they are right about New Zealand not having any snakes or critters that will bite you! The red stags roar intensified as they started to get closer but after several hours of playing the waiting game it became clear that this would not be my morning to harvest a red stag. Scott decided to break for lunch and return back in the evening since the stags would be more active in the evening. Even as we walked out of the willow bottom, the red stags continued to play their wonderful melody.

Back at Mum’s place, Ann served another splendid meal for us. Following lunch, we had a few hours before returning to the field so I decided to follow my guide’s suggestion and take a nap. Little did I know what the evening hunt would have in store for me? In the back of my mind, I reflected back about what Scott had said about day one of a red stag hunt. My two-hour nap gave me the boost of energy necessary to continue my chase for a red stag.

On the drive back out to the field, all I could think about was that only a few hours were left in this first day of my hunt. As we approached the hunting area, Scott said, “We are late! They are already in the willow bottom.” At that point, I was crushed. Suddenly, Scott said, “Look there are two stags just to the left of the hilltop. Let’s put a stalk on them.”

Our stalk began by utilizing a belly crawl to get me into position. I am positioned out in the open about two thirds the way up the hill from the willow bottom with only knee high tall grass for cover. Scott is ten yards behind me calling the stags. They begin to answer him and he says, “Get ready, they are coming towards us.” I am on one knee and I quickly nock my arrow and clip my Scott’s release on my loop. I am excited and my adrenaline is elevating because my opportunity to harvest my stag is about to become a reality.

Without warning the red stag turns and starts to go away from us. All I can hear is their roaring starting to fade as my chance to succeed on day one is starting to fade. I put my arrow back in my quiver. Scott decides we need to reposition ourselves. The good news is this one does not include a belly crawl. The bad news is now we need to slide down the hill in a seated position! Scott says,” Follow me but watch out those plants have thorns.” 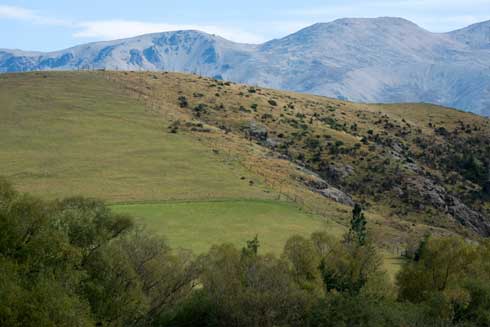 At this point, it is just a matter of which stag will get in range first. Again, Scott tells me to get ready when suddenly the red stag coming down the hill breaks away and goes directly into the trees. The stag on our right decides that he likes the coverage of the willow trees as well. Now, there are several trophy red stags in the willow bottom. All I can hear is a thrashing noise echoing from the willow trees as they rub their antlers and intensify their roar.

NOTE: CHRISTCHURCH was hit with a major earthquake. Anyone wishing to donate to the relief fund is encouraged to go: Christchurch earthquake relief fund.

Check Back for Part 2