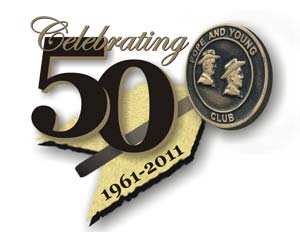 January 27th, 2011, marked the actual 50th Anniversary of the Pope and Young Club.

It was on this day in 1961, that Glenn St. Charles, Rosalyn Remick Malinoski, Bill Brown, Wayne Hathaway, Jesse Rust and G. H. Malinoski, sitting around a table in Glenn’s Northwest Archery Company store, officially called the Pope and Young Club into existence.  Papers had been filed, a Board was being formed and Articles of Incorporation prepared.

Many years of creating a program to prove the effectiveness of the bow and arrow, and to improve the image of the bowhunter, had come to fruition–a membership-based organization carrying out those missions.

This officially kicks off a year of special ways the Pope and Young Club is recognizing this 50th Anniversary milestone.

The central celebration of the year will, of course, be at our National Convention, April 6-9, 2011, in Rochester, Minnesota.  It is the Club’s hope that every member will consider attending this very special celebration.  It is a perfect time, today, to make your own plans to join in the camaraderie of this landmark gathering!  Convention registration packets were mailed to the full membership in December, but can be requested again by contacting the headquarters (admin@pope-young.org or 507-867-4144).  Details are also available on the Club’s website (www.pope-young.org), as is the means to register and order tickets online.

You won’t regret taking the time out of your busy life to pilgrimage to the Pope and Young Club’s biennial gathering, dive into our rich history and heritage, and share in this one-of-a-kind celebration of our lifestyle – Bowhunting!