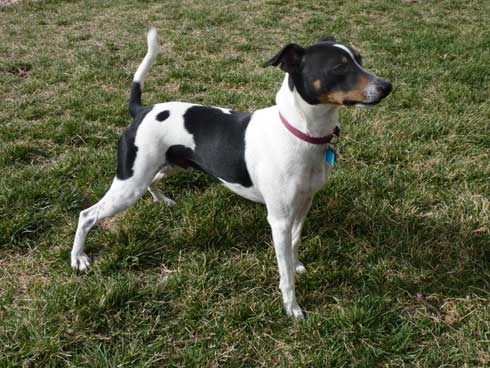 This is going to be one fine tracking dog.

Several years ago I attended a Bowhunting.Net hunt sponsored by Billy Don Van Cleave and Robert Hoague. As usual we had a great time chasing whitetails, hogs and turkeys. One day I arrowed a nice 10 point buck late in the evening. Although I thought it was a good shot, I found only one small drop of blood and darkness was quickly falling. I went back to our lodge and told Billy Don and Robert about the deer. They knew what to do. It was dark by now and it would be hard to follow the deer’s trail especially with little or no blood. That’s when Billy Don pulled out his secret weapon – a Jack Russell terrier named “Tater”.

Tater was not phased by the lack of blood. He jumped on the trail and pulled Billy Don by the tether connecting them a hundred yards to where my buck lay. Tater became my new best friend and got me to thinking about having my own tracking dog.

Fast forward a few years. I met another outfitter in California who also had tracking dogs. They were a crossbreed of Jack Russell and Decker terriers. I had never heard of a Decker terrier but after seeing them in action, I was impressed. After another couple of years, I got a phone call from the outfitter notifying me he had some pups for sale. I flew to California and picked up my pup. He was about as big as my fist.

You may have heard stories about how wired Jack Russell terriers are and those stories are probably true. The cross breeding with the Decker terrier seems to nullify these characteristics, if my pup is typical. He is mild mannered and a great pet. He will lie down in the house and behave much better than the Brittany Spaniels I also own. He quickly became my friend and is excited to greet me every time I walk into the room.

Now don’t get me wrong, Decker/Jack Russell terriers are not the only dog you can use for tracking. Blood hounds, dachshunds, and many other dogs will work and do great but I had my heart set on a small dog.

Just so you understand, I am not a dog trainer and know very little about teaching one to trail blood, but I was willing to try and committed myself to giving it my best effort. I’ll tell you what I did for training. You will probably have some ideas of your own which may be better.

The first thing I did was search the internet for organizations and books dealing with training dogs for tracking. One of the books I got was John Jeanneney’s Tracking Dogs for Finding Wounded Deer. It contained many useful tips and helped to get me started. The owners of blood tracking dogs often form clubs to share tips and tricks; maybe one is in your area. You might join one to learn from other owners who are more experienced. One national organization I know of is the United Blood Trackers ; they have events throughout the country.

I talked with the outfitter who sold me the pup several times asking for advice. One of the main tips he offered was to train with blood, any type will do. The reason for using blood is this. Suppose your dog ran into a herd of deer as he is working a trail. You don’t want him to be following only deer scent or he would be totally confused by the scent from all of the deer he spooked. If he’s tracking blood, he’s after just one trail and no others.

I started with beef blood and very short trails, maybe 20 yards long. In that trail I would drop small pieces of a hot dog or small balls of hamburger (he seemed to prefer the hamburger). I worked him for short periods of time 3-4 days a week. I didn’t want him to be overworked and lose interest so I kept the training to 10-15 minute periods. Gradually over the summer I extended the blood trails and added some turns into it. When he came to the end where a bloody rag lay, I loved him up and let him know he had done a good job.

This past fall I only got to work him on one deer. I shot a doe and she died after a 30 yard sprint. I went back to the house, got my pup (I named him “Decker”) and put him on the spot where the deer stood when I shot her. He worked the trail with a little encouragement and found the deer. I was more excited about it than he was. It’s best to make sure the pup’s first tracking tasks end successfully so he is encouraged by his good fortune in pleasing his master.

I saved some blood from that doe and got some more from friends who shot deer last fall. I froze the blood in small containers so I can thaw them when needed. We’ll do a lot more training this summer making the trails longer and more complicated.

One word of caution. Check with your state hunting regulations before buying or using a tracking dog. It’s not legal in all states and some have restrictions. For example, in Missouri the dog has to be handled with a restraining rope; he can’t run freely without the owner maintaining control. So if it’s ok in your state you might want to give it a try; it’s another project for the off season.

I know my pup is a long way from being a seasoned blood trailer but I think he’s on the right path. I’m anxious to see how this fall goes; I think my efforts will be rewarded.