by Engee Potgieter
in Bowhunting Posts
0 0
A A
0 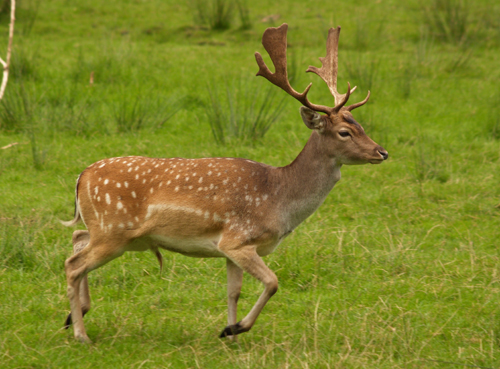 Although not indigenous to Southern Africa, a number of great Fallow Deer trophies are taken yearly by hunters.

Fallow Deer are one of the more recognizable exotic species in South Africa, having arrived on our shores in the mid 1800’s, since then they have thrived and can be found in most regions of our country. Although Fallow Deer are frowned upon by nature conservation authorities they have no visible negative impact on our environment and get along very well with our indigenous game species.

Fallow Deer are very interesting antelopes, as they differ in quite a number of ways from our indigenous species; since they are originally from Europe they are better suited to colder conditions as one can tell by looking at the incredibly thick layer of fat on the venison in the summer months, something rarely, if ever seen on our lean game.

The Fallow Deer’s venison however is of such an outstanding quality that it truly warrants an article on its own, not just a mere mention here! It is the only venison that I know of and have dared to prepare in the same way as one would livestock like beef or sheep. It can be prepared in number of ways and is absolutely delicious!

Being antlered game Fallow Deer lose their antlers yearly before they grow back anew and this is one of the reasons that your hunt for a trophy fallow Deer should be timed to perfection if you want a trophy Stag with unbroken antlers and edible meat. The reason for this being that Fallow Deer start to shed their velvet (the soft skin covering the growing antlers) somewhere between the end of February to mid March, depending on the region and weather conditions.

It is best to postpone your trophy hunt until the Stags have shed their velvet, as they will only have fully developed once the velvet has dried. Antlers still covered by the fine velvet skin are still growing and have not yet grown to their full size. The rut usually starts about three to four weeks after the Stags have scraped all the velvet off, and is the rut in late March which cause the Stags to start fighting fiercely to secure hinds (ewes) for the upcoming breeding season. In this time the Stags do not spend too much time grazing and lose condition very quickly, not only that but mature Fallow Stags start to take on a musky odour that makes the usually succulent venison near inedible.

Not only is the meat of no use once the Stags have started to fight but they often break off many tines, or sometimes-whole antlers in these tenacious fights. Lastly, being preoccupied by the rut and looming competition from others, the mature Stags are often “stupid” or callous and easily approachable, thus the height of the rut is, in my honest opinion, not a very sporting time in which to hunt them.

Taking all this into account one has about three, or at best four weeks in which you can hunt Fallow Deer if you are firstly, after a worthy challenge and want a mature Stag which not only has already shed all it’s velvet and has unbroken antlers, but also a Stag who’s venison you can rightfully enjoy. Another advantage of hunting Fallow Deer so early in the season is that you will still find the Stags in their summer coat, a beautiful red-orange coat dappled with white spots all along its back and sides. Once the winter arrives the Fallow Deer’s coat turns a pale tawny colour closely resembling our Common Reedbuck, also interesting to note is that Fallow Deer are found to have quite a few different coloured hides, from snow white (not albino though) to a charcoal brown, almost black, but it is the summer coat that is by far the most attractive.

My quest for a trophy Fallow Deer Stag took me to a small town called Amsterdam in the Mpumalanga province, I had booked a hunt for a mature Stag more than two years before going as the German owners of the property only allow one or two mature Stags to be hunted per year and the waiting list is understandably long.

I had planned my hunt for the last week in February in hopes that the Stags would have just shed their velvet and would be in prime condition. When driving through the main gate I noticed that my planning had been spot on as the Stags were in prime condition with their antlers brushed of all the velvet and in perfect condition. For my Fallow Deer hunt I decided to use a Diamond Marquis  by BowTech to test as I really liked the bow handled and I felt confidant with it in hand, Fallow Deer are renowned to be quite spooky if hunted hard and a flat shooting, accurate bow would be a sure benefit. They are however not as tough as some of our indigenous game but regardless of this, precise shot placement is of the essence.

Our first day’s morning I spent driving around looking for a suitable Stags and all though we did see quite a few mature Stags, there weren’t any that met up with the standards I knew the property could produce. Although the first day ended fruitless I felt a renewed determination for the hunt as there were many Stags around and seemed calm and unperturbed by the passing vehicle. The second morning started cool and fresh with the promise of success hanging in the air, and as soon as the guide arrived just after six o clock we set off in search of a trophy Stag. Although we did not know it at the time, but I would have my trophy before the morning was out.

Twenty minutes after setting off I was looking at a group of about six Stags of varying ages lying under a ridge through my binoculars, there were two that seemed good enough to merit a closer look, so we backed off and took a wide detour to get the terrain and wind in our favour. As it so often goes when hunting we bumped into a second, previously unseen group of Stags that were busy grazing on a plateau while still on our way to the initial group we saw.

A quick glance with my binoculars immediately confirmed that there were two very nice Stags, whichever I would be happy to take if given the opportunity. The hunt was on! They were blissfully unaware of us as they were intently busy grazing on the lush green grass still abundant on these rolling hills, some 120yards away. Luckily the terrain between the group and us was littered with quite a number of boulders of varying sizes, which would aid me in crawling into shooting range undetected.

It was slow and uncomfortable progress, but progress it was, and we soon found ourselves behind the last line of boulders that would hide me and my guide. I cautiously sneaked a peek over the top and of the group of five, the two large stags were grazing over to the left with the three youngsters standing to the right, one of which, an attractive white stag, looking in our direction. He did not seemed alarmed at the “bushy” shape moving at a snails pace behind the boulder as he promptly lay down after a few moments. I could see that the two larger stags were still busy grazing some 66 yards to where I was crouched and were totally oblivious to our presence; only their antlers could be seen bobbing up and down as the fed on the knee high green grass.

I made the decision to take the one on the left as he was the closest and duly nocked an arrow, waiting for him to take a few steps closer and turn broadside. After an agonizing few minutes he finally took a few lingering steps in my direction, a quick range confirmed that he was now exactly 61yards away.

I clipped my trigger to the loop and waited patiently for him to turn broadside. I had no sooner clipped my trigger on when he took a step towards the younger stags, giving me a perfect broadside shot. I looked back to confirm with my guide to ensure he had the right stag in view and slowly rose to a low hunch while drawing the 70# Marquis, as soon as I heard the “ok” I stood up, settled my 60yard pin low on the shoulder and smoothly released the shot.

The ram was startled by the arrow zipping through him and jogged a few steps before turning around to see what had caused it. I immediately noticed that although my shot was the correct height it was two inches to the right of where I intended. Later autopsy would reveal that I just missed the heart, the arrow passing a mere inch behind it but severing the arteries that run above the brisket before punching a hole through the liver and exiting four inches behind the offside shoulder.

Viewing the shot on video later that night showed that my stag had taken a half step back toward me when I had looked away at my guide, therefore standing ever so slightly quartering toward me as opposed to fully broadside a mere second before. The Stag only stood watching a few seconds before walking off some 30 yards and going down, through my binoculars I could still see that his head was upright and was planning on creeping closer for an assurance shot as soon as the rest of the confused group that were standing around staring, moved away.

While my guide and I were busy discussing my next, my stag stood up on weak legs and staggered to some thick brush at the base of a small rocky outcrop. This would be the perfect opportunity to get in a second shot and as soon as the stags head was out of view we moved as fast as we dared to the rocky summit, I nocked an arrow and once at the crest peered over to see the ram walking around the base a mere 34 yards away. No sooner had he stopped to look up at the movement above him than it took my Muzzy to zip through him, right behind the shoulder.

The ram only managed a spirited few steps before going down for good. Although he was dead on his feet I was glad that I had been given the opportunity to put a second shot through him, ensuring a quick and clean death. The stag was as stunning an animal in death as he was in life, his impressive broad palms and many non-typical points making him truly unique; he would be a fine addition to my trophy room and the memories gathered on this hunt with good friends will be an everlasting reminder of stalking stags in the heat of a highveld summer.

Engee is sponsored by Muzzy Products