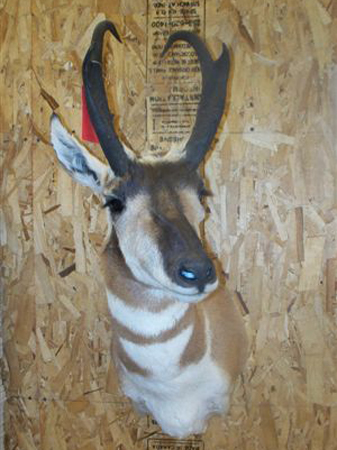 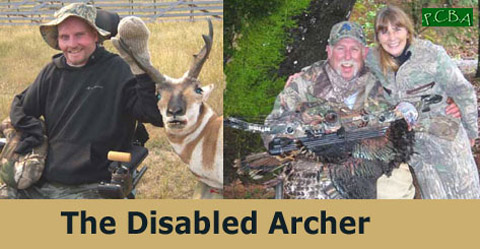 Last year I was again blessed with being selected for the Wyoming antelope hunt. I had the great fortune to share this 8th annual Wyoming antelope hunt with Kevin Oldham.  Kevin and I met at a Wisconsin deer hunt for the disabled several years ago and became friends. He is a volunteer/landowner for the hunt, as well as a bear guide and owner of an archery store, Over Draw’n Archery in Wisconsin.

Our Physically Challenged Bowhunters of America antelope hunt began with a 15-hour drive from Sun Prairie, Wisconsin.  Kevin drove the full 15 hours.  We arrived in Gillette and met Justin Eadus, our guide for the PCBA hunt.  Since we got in a day early, Justin took us to see some sights and took us prairie dog hunting on public land.  I was not able to shoot one; however, Kevin shot one from over 400 yards.

On Wednesday we met other PCBA members, bought our conservation stamp and sighted-in our bows at Rocky Mountain Sports.  Kevin installed a scope on my crossbow and I wanted to make sure I could accurately shoot the bow with the newly fitted scope.  It was nice visiting with old friends, meeting and making new friends during this time.  Later that evening, at the Family Life Church, we had a delicious dinner, followed by fellowship and listened to the hunt coordinator.  Everyone was very excited about the prospects of the next few days.

The first day of the hunt started out with a very large breakfast at the church put on by the WY-PCBA members.  We loaded up gear and drove to our designated landowner’s property and ground blinds.  Being my disabled hunter guide was not an easy job.  Kevin had to push me in my wheelchair over sage stumps and lots of uneven ground to get to our hunting blind; which was set up near a waterhole.  We decided that I would set up facing what looked like a tunnel of scruff brush, where all the hoof prints met near the water.  I was positive that I would see and shoot a trophy antelope.

About 8:00 AM, Kevin gently taps me on my shoulder and whispers, “Three doe coming down the hill behind you to the water.” Then he said, “A buck”.  After a short time, they all walked away.  Due to my position in the blind, I never saw them. About 15 minutes later, another tap and a whisper, “More doe are coming over the hill behind you going towards the water.”  I kept thinking to myself that something has to come out in front of me.  Later in the morning, Kevin gave me another warning tap.  I had to turn my head around to see that it was a buck its horns came out sideways like a bull. We both whispered, “WOW, NOW THAT WOULD BE A TROPHY!”  Kevin got up slowly, trying not to make a noise as he tried to turn me and my wheelchair in the uneven land, but there was no way he could do it.  I knew I could not position my crossbow to take the shot, so I told Kevin to try the shot”.  He drew back his bow, but the buck suddenly left without providing him an opportunity.  About five more bucks came over the hill that day, but when they saw the blind they froze and then bolted. I saw nothing in front of me.

The next day, I set up facing the hill (the opposite direction of the day before). Of course, nothing came over the hill.  All day the action was behind me, where I had set up the day before.  We were about to pack up and head to the church for dinner, when I just happened to look off to my left.  A buck was walking on the top of the hill and coming towards us.  I tapped Kevin; my crossbow was on my bipod 45 degrees angled away from the buck.  The buck held his head up. He was a beautiful sight sky lined on the hillside.  When he saw the blind he stopped.  I could not tell if he was going to bolt or continue walking to give me a decent 20-yard shot; I was hoping for the later.  After a short second, I thought he would bolt so I slowly moved my crossbow off my bipod in front of me and shifted it over to the left for a shot without the bipod.

I thought the antelope to be about 30-yards away.  I took my best aim and pulled the trigger.  I heard the arrow hit the buck and saw it run over the hill.  All this happened in what seemed like just a minute.  Kevin did not even get a chance to see the buck until I hit it.  Kevin went out of the blind to see where it ran over the hill, followed it a short distance to a fence where the buck had died.  I did not realize it but Justin excitedly watched the whole thing from his truck, where he had parked to wait to pick us up. This was my first time using a Rage expandable broadhead – it left a HUGH hole.  The shot was a high-double lung shot.  The buck had horns with ivory tips, spurs on the inside and the horns were about 14 inches long.  It was my biggest buck.

The next day, no more bucks came down close enough for Kevin to get a shot, so we decided to move to a new location.  On the last day, Kevin got his chance and shot his buck, but it ran.  After waiting, he got out and stalked the wounded buck.  He got it.  I stayed in the truck and watched as he followed the animal.  It was exciting. We both got an antelope buck in Wyoming by bow. WOW.

We went back to the church for dinner and to say goodbye to old and new friends.  PCBA is a wonderful organization to provide an opportunity to men and women with disabilities, who would not otherwise have a chance to hunt. After a delicious dinner that night, PCBA held a drawing and my name was picked to get a free head mount of my buck by Rusty’s Taxidermy.

Thank you, Rusty Bell, for your participation in the drawing by donating your professional service. Before we went back to Wisconsin, Justin, who works for Alpha Coal Mine gave us a very good tour.  It is great how they restore the used coal lands to be exactly like it was before the mining began.

I want to thank the Lord for giving me the opportunity to hunt in the PCBA Wyoming hunt, the buck and for everything He has provided for me.  My family will enjoy their antelope meals.

I thank the Wyoming staff for all their effort, volunteerism and work, the landowners for graciously donating their land to the physically challenged and to all the supporters for supporting such a great organization and hunt. I also want to thank my friend Kevin for all his work and frustrations while helping me enjoy this hunt.  It does provide disabled persons, like me, a chance to have fun.