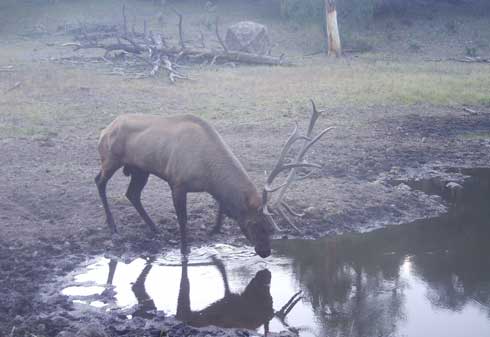 Sometimes we don’t see the true value of the lessons we learn in our endeavors until after we have finished them and have had a chance to sit back and reflect on what transpired. Occasionally, the lessons are easy to see and understand. Many times, it takes patience and revelation to see the truth. My 2010 elk hunt was one that included lessons of both types, and while some of these lessons are well known, many of them we have to ‘relearn’ from time to time. I think it is important for each of us to go through our experiences in this life and remind ourselves every chance we get what works and what makes us successful. Here is my review of my elk hunt.

My 2010 hunting year started off with a true blessing from God. For the second year in a row, I drew an archery bull elk tag in the famous Gila country of southwest New Mexico. Sounds easy? Not a chance! My tag last year was the first one I had drawn in 10 years. To top it all off, this year’s tag was for the third archery hunt, the hunt that historically has been the week the bulls hit full rut here. I was overjoyed at this good news and full of excitement about the odyssey that awaited me. I never could have fathomed all of the lessons I would be reminded of during this hunt, and the one that would be revealed after.

Lesson One – The tag I drew was in Unit 23, not Unit 15 which I historically have hunted. This would be my first time hunting Unit 23, but no problem with that. Through many hours of studying maps, aerial photography, scouting, moving trail cameras, talking to area ranchers and hiking, I found plenty of bulls in plenty of places to hunt. The ‘relearned’ lesson – hard work BEFORE the hunt is just as important as hard work during the hunt. Those hours are necessary and always pay off whether it is a new area you will be hunting for the first time or one you have hunted many times. The more time you put in before the hunt, the greater your chances of success will be when the hunt starts. This is a basic fact that never changes.

Lesson Two – New hunting year means a new Alpine Archery hunting bow. This year I would be shooting the Alpine Nitrous and went to work getting it ready for the year. It does not matter that I have shot thousands upon thousands of arrows out of dozens of different bows over my hunting life. When we each get to that moment of truth with a big buck or bull standing right in front of us, ALL that matters is one arrow out of one bow. The only way you can make that one shot without thinking about it is for the act of shooting the bow you have in your hands to be second nature. Something you have done thousands of times at every possible angle from every possible position. That is one of the true advantages to Alpine’s lineup of bows – the feel from year to year does not change and the transition to the next bow is smooth and without a big change in what you feel or how you shoot. The ‘relearned’ lesson – You can never practice too much and when you think you are shooting perfect that should be a sign to you that you better keep shooting.

Lesson Three – Big game animals are never on the same schedule that we are. Just because you saw a bull at point ‘A’ all summer and up to a week before the hunt, does not mean that he will be there on opening day. It is his prerogative to move to a new location at will. The ‘relearned’ lesson – Always be prepared to scrap your whole hunting plan and strategy for a new one on opening day. The only way you can do this is to scout, scout, scout.

Scouting has to be centered on their three necessities: water, food and cover. You not only have to find where these three things exist to find the animals originally, you also need to know where they exist in proximity to the current location in case they get pushed. Any pressure applied to the animal you are pursuing prior to your hunt, a change in the weather, or any other urge he gets will move him right out of where you have him pin-pointed to a new location where he feels more secure, or where the ladies take him!

Lesson Four –If you have done everything that you could to properly prepare for a hunt and something is different or goes wrong when you get there, just hunt! Use the knowledge and tools you have been given and get to work. The ‘relearned’ lesson – Don’t let something unexpected change the way you do things. Use the knowledge you have.

My 2011 elk hunt started in late September, right at the conclusion of 15 days of rain in an area that had been dry all summer. We had bulls on trail cameras, had seen bulls and had plenty of local insight as to where they would be when the hunt started. Somebody forgot to tell the elk these facts. A week before the hunt, the bulls all moved to higher elevations and thick cover. The combination of the rains and hunting pressure from the first hunts had them on the move. Accordingly, I moved into an area where a local rancher had told me he had historically seen a lot of elk. I had only minimal time to scout the area he discussed, yet found some areas that met the criteria of what I was looking for. The day before the hunt was spent setting up ground blinds, trail cameras and looking for sign. My wife Yolanda and I found some excellent locations with lots of sign, so the enthusiasm for opening day was high.

Opening day found us on a ridge line at sunup. Shortly after the sun came up, we got our first response to our cow calls. A deep bugle came screaming through the trees. We started moving toward the bull, and the more we called the more and harder he screamed. After about 15 minutes we got our first sighting of him – a huge 6X6 with 4 cows. Only one problem, he was not on the same ridge we were on.

We continued to call and he continued to answer. He would not leave his cows and there was far too much open country for us to be able to get to him. We watched him for a few minutes until he finally faded over the ridge and out of sight. Better to let him walk off than to push him out. This might give us another chance at him later in the hunt!

Based on the moon cycle and the weather, we really only had about an hour each morning to try to call a bull in. The full moon had them up all night and that magic hour after the sun came up was time for them to transition from feeding areas to bedding areas. By 8:00 AM, it was time to go check trail cameras and get ready for the evening hunt.

We hit a camera on a tank that we had put up the day before and had many pictures of good bulls. This made the decision of where to hunt the first evening easy so about 4:00 p.m. my wife and I headed off the ridge down into the tank and by 4:30 we were in the blind waiting. The arid climate here always gives us one advantage. Even after 15 days of rain it only takes a couple of days for things to dry out to the point where game will have to start hitting water holes again. One problem with that however is if you are hunting on a working ranch the livestock also need to water. Within an hour we had over 100 beef cows lying all around the tank we were hunting. That many cows will keep all of the wildlife away. Day 1 ended with a long climb out in the dark and plenty of questions about what to do the next day.

Day 2 started out the same as the day before. Lots of bulls answering the calls but all headed to bedding areas and not willing to leave cows or slow down long enough for us to make a move on them. A short visit with the rancher revealed another water hole that we had not seen from the last place we had seen the big bull opening morning. The rancher said that had to be where that bull was going when we saw him last. We still had one more ground blind that we had not put up yet so decided that would be the place for it. We spent the rest of the morning packing the blind in and setting it up and the evening hunting the blind. Great spot and the bears agreed. Early in the hunt I had a black bear come into the blind, smell the material in the back and catch a whiff of me. He spent the rest of the evening growling up on the slope and keeping everything else from coming in, save for one old mule deer doe that needed a drink pretty bad. Day 2 was over with four more days to go. Time to start reviewing the lessons learned so far.

On the way back to camp I kept seeing the trail camera pictures from the tank we hunted the first night in my head, and an old voice from my bass fishing days came up in the back of my head saying “Don’t leave fish looking for fish!” Based on what had been seen I knew there were a lot of bulls moving through that country and I needed to get back there and focus on them. However, when we had checked the trail camera pictures on day one, all of the elk had been in there in the evening. That left the morning wide open to run-and-gun and try to call one in again.