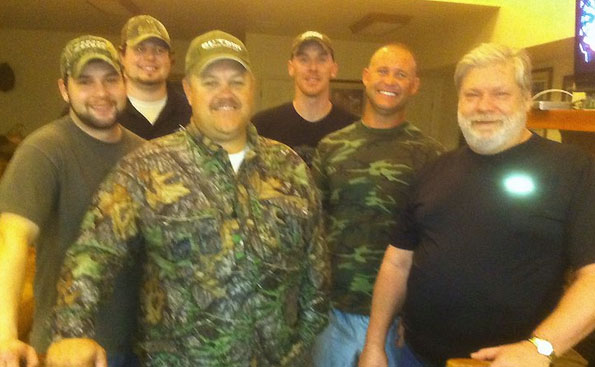 Late in the afternoon Collin and I picked up Fred Lutger at the Tampa airport and we took off for hunting headquarters. It was late when we got to Arcadia, Florida and we called David Mills, he gave us directions to the hunting lodge at Williams Wildlife Preserve.

Everyone else who was gonna be there, was there; Shane Hendershot and C.J. White of Zink Calls and Paul Byrd and David Mills of Williams Wildlife Preserve.

We did a turkey hunting no-no and talked and told hunting stories until midnight. My alarm went off at 4:00 AM. and I took a shower, pulled on my hunting pants and went downstairs for some coffee Fred left with Paul Byrd.

David Mills had things set up for Shane Hendershot  to do the calling for my hunt this morning. I figured Shane would probably do pretty good since he is the NWTF World Champion turkey caller.

Also along were David Mills, C.J. White and Collin Cottrell. Collin and C.J. both were going to video.  So we had quite an entourage loaded in David’s suburban. We set up two pop up blinds in the dark and waited quite a while for enough light to see.

At gobble time we heard a distant gobble.

Have Bow, Will Travel Tour Rolls On