Wicked Sister Does It

We set up by a long, narrow open field in the woods. Collin and I got in a Double Bull blind. Shane Hendershot, C.J. White and David Mills made quick ground blinds to hide themselves.

Shane yelped softly with a Zink diaphragm call named the “Wicked Sister.” He waited a little bit and stepped up the volume. Then he waited several minutes and called again.

Twenty minutes from the moment we sat down Shane saw a gobbler step out of the woods on the opposite side … and about 100 yards behind the blind. He nodded at C.J. “Bird to the right,” C.J. said.

I carefully touched the corner of the blind’s closed window behind me and looked. A gobbler was standing near the opposite edge 80 yards away. Shane hit him with some Wicked Sister yelps and he took a few steps and stopped and I was certain I saw a beard on him. I checked him with one side of my binoculars and sure enough, he had fat rope beard.

Shane cut at the gobbler. It streatched his neck up high and saw the decoys in front of my blind. Shane made the feeding hen decoy turn away from the gobbler. Ol’ Tom couldn’t take it, he started our way. He stayed on the far side as he advanced. I lost sight of him through the small slit and looked to see if I could see him through the blind’s main window. He stopped straight across from us.

Shane moved the hen decoy and  the gobbler blew up. It was on now. 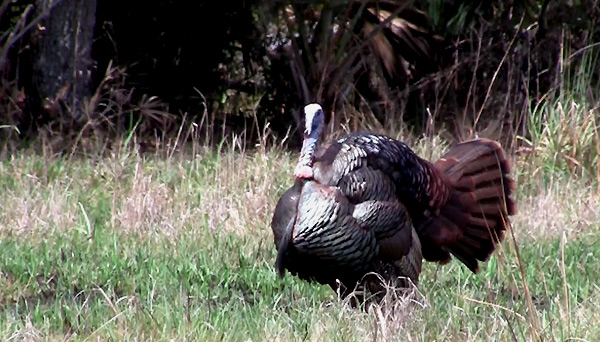 I glanced at Collin and saw the gobbler in his video view screen, then I hooked my release up and waited. It didn’t take long.

On the other side of the opening the gobbler’s head was white. As he brought it on his neck began turning red. He stopped a few steps from my jake decoy. 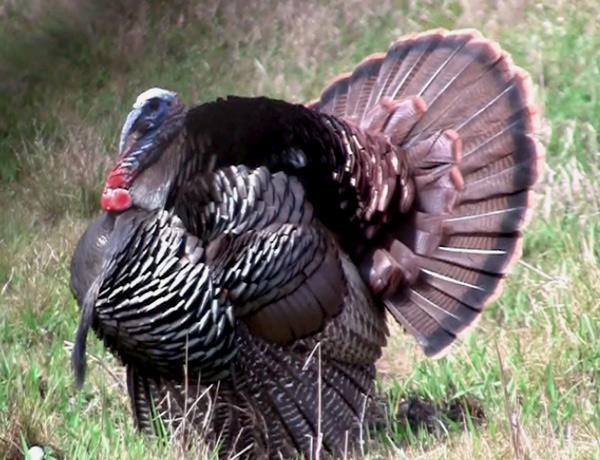 I eased my bow back slowly, a new, black finish Alpine F1 Fireball on its first hunt ever. I was careful that my Victory arrow stayed below the shooting window. Then I raised the bow and moved the top pin up the longbeard’s legs to the vitals. He dropped strut and stepped toward the hen decoy. I took my shot.

The gobbler bounced into the air, flopped, went 20 feet and stopped. I stared at it, watching to be sure it was dead.  The Grim Reaper flew and I watched the bird drop.

Shane, C.J. and David were already on their feet. I looked at Collin and he high fived me so hard it made my wrist hurt. I jumped through the blind’s window and beat them to the longbeard.