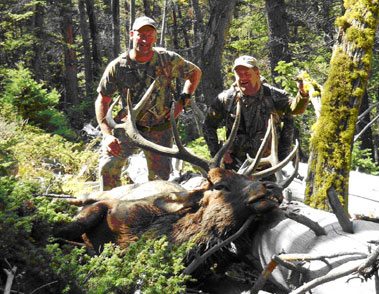 The excitement begins. We got our tags and now the intense training begins. Day in and day out we watch Elk Nut videos to try to perfect our elk calling techniques, memorize the strategies to be used to fill those most cherished elk archery tags and drive our family and neighbors crazy with the constant bugling and call calls leaving our house. For some of us it would be our second attempt at archery elk hunting. My dad Ken, my husband Mike, his friend and I went last year and went tow for four. My husbands friend and I both harvested bull elk the third day of the hunt.

All too soon the day was here. Bags were packed. A pile of bows, camo, hunting gear and food filled the garage and now needs to be strategically packed into the truck and trailer while leaving room for the hunters to have a comfortable 22 hour plus ride to my grandparent’s home in Wyoming where my father, husband, grandfather’s friend, Clem, and I would stay for two weeks for archery elk hunting.

After a long ride across the familiar roads of Wisconsin, then through Minnesota and across desolate South Dakota plains, we finally see the Rocky Mountains and oh, what a beautiful sight. The anticipation grows. We are here and the elk better watch out. We unpack and jump in the vehicle to start scouting some new spots. Grandma feeds us an awesome home cooked meal and we head off to bed to try to get sleep before that alarm rings at 4:30 am. 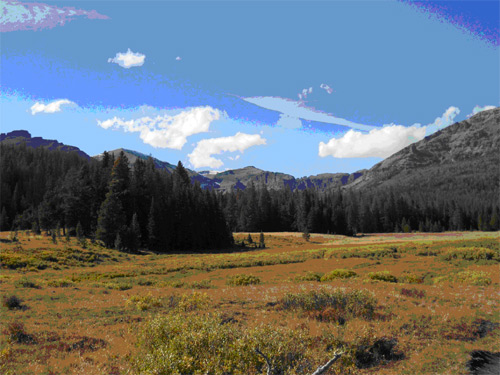 Mike and I take the high ground hunting in a place we hunted last year where I missed an elk the first day. Missed judged the yardage. Go figure. They are a bit bigger than a whitetail, which makes judging yardage a bit difficult. The fresh snow with very few tracks led us to believe the stories we heard maybe true. The grizzlies had pushed the deer out of that spot. Yet, after a few hours we found one set of tracks and proceeded to follow them, to only see a cow trot away as she bagged us sneaking up on her.

Dad and Clem didn’t have any luck on the lower ground. So, we moved on to a different spot, a new spot. We dropped Dad and Clem off to start hunting and then drove further up to begin our hunt. Dad and Clem would hunt toward the truck and we would hunt past the truck up the mountain and back. We didn’t see hardly any sign but that of another hunter who had hunted there days before us. We headed back to the truck to see how the other two did. The stories that were told were a bit incredible. They ran into a handful of cows and 5 bugling bulls, one which dad called into Clem within 10 yards, but there was too much brush in the way and he could get a shot. The bull was supposed to walk through the opening, but apparently didn’t get the memo. So, at the end of day 1, no elk, but definitely hope.

The morning started out pretty miserable for dad. We got out to another spot we hunted last year and the elk where bugling like crazy on the lower meadows while dad spent some time in the woods hurling up breakfast due to a touch of the flu. We worked in to where the bulls were but they had already headed up the mountain. So we started in the upward climb after them while grandpa and Clem stuck around the meadows to try to work any satellites that might still be interested in a lost cow. We worked our way up with locator bugles every so often. We got a reply and set up. Dad, not thinking, set up behind a tree hoping the bull would walk down a gully toward my husband who was calling while I sat off to the other side in front of some large evergreens. Well, the bull came in to about 20 yards of my dad and 75 yards of me and aggressively raked a tree for what seemed like forever. Dad, sitting behind the tree, could not get a shot. After some calling back and forth and without seeing a cow the bull left a bit suspicious. No shot, but a valuable lesson learned.

We made our way further up the mountain again setting up and letting out some locator bugles along the way. Another answer. My dad and Mike set up and I crept back down the mountain a bit to make some cow calls. Apparently, the biggest bull in Wyoming came strutting in to within 15 yards of dad and raked a tree. Dad didn’t have a shot through the thick Wyoming brush.

After raking the tree the bull walked around to give my husband a shot. We drew back and for the first time ever his arrow got stuck between the rest and the bow. Probably due to the angle he held the bow as he drew back. The bull bagged him and took off. No shot and the so called biggest bull in Wyoming took off spooked and a little more educated.

We made our way around the mountain side and sat to take a short break near a meadow. Mike bugled. No answer. We discussed our mistakes and regrouped. Suddenly, there behind my husband stood a respectable bull watching us. Don’t move Dad whispered. I reached towards my bow and the bull bagged us. He had walked in completely silent and left very quickly once he discovered where the bugle came from. Yet another missed opportunity and lesson learned.

We made our way a bit further and got yet another reply. This bull would not come in. He would only get so close, but wouldn’t show himself. Was it the same bull that came in silent before? Maybe, but I guess we’ll never know, but he sure didn’t want to come in and let us see him.

We made our way down the mountain back to see how Clem and Grandpa where doing near the meadows. They had a couple bulls bugling across the river, so we strategized on how we could try to get across the river to hunt.

We crossed and after listening to the bugling we work our way toward the bulls and set up our plan of attack. Dad started calling without giving my husband enough time to set up and a bull came walking straight in to my husband who was in the wide open and not ready to shoot. Bagged. No shot. We regrouped and moved in a bit more to see a cow and hear the infamous pop’n grunt. Another day in and many lessons learned.

We made our way up and over and started hunting down the mountain with the same technique as the past. We found a group of five wallows which were used fairly recently. We hunted down a bit more and finally got a response but it was behind us, from up the mountain. We figured it maybe started to come in quiet when it heard us at a previous set up. He didn’t find anyone and then bugled back when we set up further down.

Dad and Mike set up as shooters. Mike made a few calls as I snuck down the hill to start cow calling. The bull came in and my husband made a great shot. My dad thought the elk was gone and walked out a bit from where he was set up and there the bull was. The bull immediately spooked and ran off. It was hit good and we trailed it through some awful Wyoming terrain and found him dead in a mess of fallen timber on a steep incline.

We sent dad down for my uncle who had pack horses in town. We were a long ways from the trailhead, but not far from a horse trail. We cut up the elk and packed it up the incline through the timber to the horse trail and waited for the horses or the grizzly which ever came first. I felt like we were sitting on a bear bait. After many hours of packing the meat out, it was time to head home and celebrate our first elk.

Come back tomorrow for Part 2

Gobbler Down in South Dakota