by Sam Fadala
in Bowhunting Posts
0 0
4 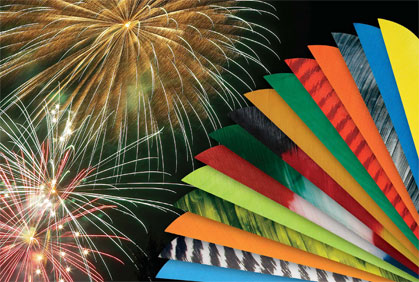 Your choice when it comes to colors and designs. Courtesy Gateway Feathers.

Feathers are forgiving. That simple statement means a lot to traditional bowhunters, although I also chose feathers over plastic vanes when I was a compound shooter. Forgiving—it simply means that feathers fold out of the way when striking something such as limb, branch, or the shelf of a bow. Vanes have a wet weather advantage, and they’re probably right for certain target shooting. Otherwise, give me feathers.

A split plastic vane can cause an arrow to detour off course. Conversely, I’ve fired darts with tattered feathers that found the bull’s eye without fail. In short, feathers make a superb guidance system, supplying sufficient back-end drag to keep the arrow flying point-forward.

As with so many other historical points, we have no idea concerning the history of feathers in archery. Tough leaves were used by certain African tribes of old, but the Ice Man, uncovered from a glacier in the Italian Alps 5,300 years after his passing, had feather-fletched arrows, three per shaft, off-set, just like mine. Or should I say mine are like his? Our Plains Indians also relied on feathers for their arrows. Ishi, the Yahi Indian who taught Pope and Young archery, was not prejudiced—he used feathers from eagles, hawks, buzzards, and flickers, securing them to the shaft with thin sinew and seldom glued. Roger Ascham (born 1515), author of the famous old archery bookToxophilus, taught that “ . . . there is no feather but onlye of a goose that hath all commodities in it.”

However, and in spite of Ascham’s advice, feathers from pheasants, peacocks, swans, vultures, blue herons, hawks, and many seabirds have also found their way onto arrows. My favorite feather is donated by the common Thanksgiving turkey, gathered mainly from white birds because that type prevails for the dinner table. Unlike goose feathers, which are handsome with a high oil line for a touch of natural waterproofing, turkey feathers do not readily tatter. Natural barred are said to be a little tougher than whites. I have discovered no such difference. Simple whites work fine. They come dyed in many colors, some artificially barred, costing much less than natural barred.

In 14th century Merrie Olde England bowyers were not allowed to craft longbows after dark, should they prepare a bad one for war. However, fletchers could work around the clock. Records reveal a 1369 Royal Command for 850,000 arrows to be delivered to the Tower of London. That order represented 2,550,000 feathers. In 1418 the English government demanded 1,190,000 goose feathers—and got them! Such trivia would fall by the wayside but for the fact that the need for feather fletching today has skyrocketed along with traditional bows. Vanes will fly from an elevated arrow rest, but every longbow/recurve shooter I know shoots off the shelf, which demands feathers.

If we didn’t have feathers naturally, we’d have to invent them. They are amazing. Strength comes from structure. The vane, also known as the web, is composed of barbs interlocked with barbules and barbicels. These interlocking components of the feather, if interrupted, go back together with a simple finger-stroke. We know they are tough and so flexible that the cock feather can be turned toward the riser of the bow and that arrow will still fly in its usual pattern. That is easy to prove. All a bowshooter has to do is try it. Feathers are also light in weight, owing partly to the hollow shaft, but also their physical makeup.

Feathers stabilize an arrow in two ways: drag and rotation. Mounted parallel on the shaft, they continue to work because of drag. Toss a sock and it flutters to the ground. Put a little sand in the toe and the sock flies much truer. That’s tail drag at work. Meanwhile, parallel feathers offer zero rotational value, while mounting feathers offset on the shaft promotes rotation on its axis, not entirely unlike a bullet fired from a rifled barrel. My arrows fly fine with straight offset feathers. But helical twist is entirely acceptable, too, creating even more shaft rotation. I believe that total feather surface should only be enough to guide the arrow. More than that promotes undue drag and extra in-flight noise. That’s why I am no fan of the banana style feather, but some archers find that this large style, preferably helical, straightens their arrows out fast. It’s one of those “to each his own” choices.

Bare shaft tuning is big with certain traditional archers. They believe that if an arrow without feathers flies fairly well at close range, 20-yards and under, then it must fly perfectly when feathers are added. That is true, but also a waste of time. I have never owned a bow that failed to shoot a properly spined straight shaft perfectly when fletched. Therefore, I buy my shafts, prepare them fully, including feathers, and shoot away. It works every time. Feathers also function on any shaft material: aluminum, steel, carbon, fiberglass, and of course wood. The only trick is ensuring a proper match between glue and shaft finish. Aluminums are best prepared with a conditioner, such as SSR from Three Rivers Archery Company before gluing feathers in place. 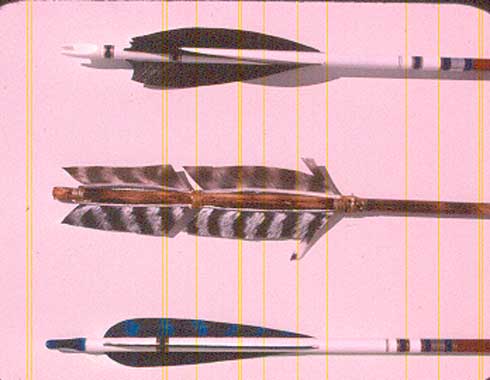 The number of feathers on a shaft is also personal preference. Some archers like four so they don’t have to worry about mounting an arrow on the shelf with cock feather outward. I prefer three, and if an arrow is placed on the shelf cock feather in, no problem. That arrow will still fly true. It’s a matter of total surface anyway, not the number of feathers. Three five-inch shield style feathers one-half inch high at the back, tapering to zero inches up front, amounts to about 3.75 square inches of surface area, while four four-inch similar shaped feathers have around four square inches of surface. Not much difference. The Vikings liked four feathers. Ishi got along with only three, just like the Ice Man more than five centuries ago. Feather shapes are numberless: shield, parabolic, Pope & Young, banana, triangular, square-shorn, round, swine-backed, saddle-backed, and more. Shield and parabolic rule today, the former supplying a little more surface area, the latter supposedly slightly quieter. I like low profile feathers, as sold by Trueflight Mfg. Co. and Gateway Feathers, LLC, five and a half inches long.

Finally, there’s the left wing, right wing controversy. Supposedly, right-handed shooters should use right wing fletching. It’s simply not true. Anyone can quickly prove this by shooting arrows of both types. I’ve tested this with a machine. Left wing and right wing arrows flew to the same point of impact. Today, feathers borrowed from the left wing of the turkey are easier to come by, I am told, because right wings are clipped to prevent flying. I would guess that turkey raisers have figured out that feathers from both wings have sale value. When I last looked, a dozen five-inch pre-shaped feathers, solid color, sold for just over four dollars, artificially barred costing $6.50, full-length natural barred going for ten bucks a dozen.

About the only negative feature of feathers is subjection to damp weather. When attached to the bird, natural oils are always working into feathers, but on arrows, snow and rain can make them soggy. Warrior Archery (307-472-0706) sells a camouflaged waterproof fletching cover that serves well in the wet. A plastic food bag is also helpful. And there are quivers, such as the Catquiver, Three Rivers Archery HH Side Quiver or Side Stalker, plus the Glenn St. Charles back quiver, that have hoods. Arrows on my bow quiver are protected with the Warrior Archery cover, while the Catquiver is relied on when rain is predicted in the forecast.