Back At The Farm

When Dave Keiser told me I was returning to the Farm we set up on yesterday I was glad, because I really wanted to give it another shot. Tanner drove Collin and me to the area. We followed him to the bottom of the hill where we got busted and set up the blind and decoys.

Forty minutes after daylight a flock of wild turkeys came from behind the blind and walked past us on the left. 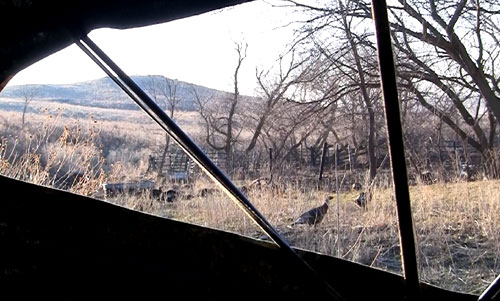 There were 2 big gobblers but they got past us before we could get the video and bow shooting co-ordinated. The group went to the farm fence and crossed under it. They then filtered through the hay storage area.

Soon we saw several turkeys through the trees, walking on the ridge in front of us.

Half an hour later 3 gobblers arrived. They stood on the ridge and watched the area.

dfghjklI yelped at the gobblers and one of them broke away and walked 10 yards down the hill and stopped in the trees. He strutted nicely. 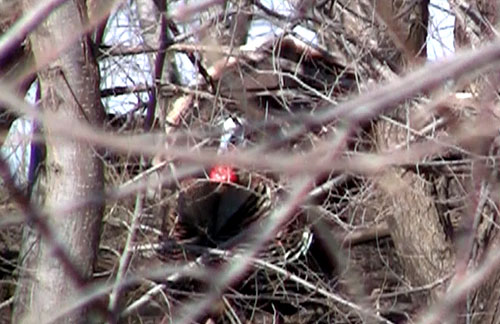 I called again and this dandy longbeard walked further down the hill and checked out our decoys from inside the wood’s edge. It didn’t come in bow  range. 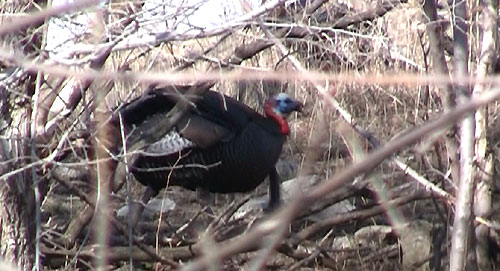 The longbeard walked away and everything cleared out for awhile. Soon some turkeys were back on the ridge. Both hens and gobblers. 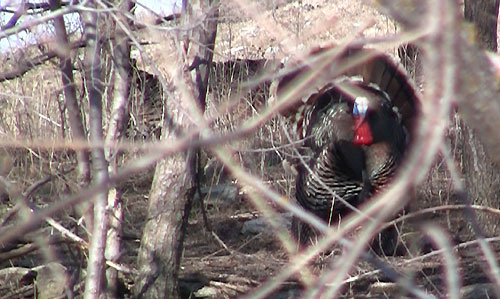 I called at the gobbler and it looked down where the blind was. He was 50 yards up the hill and I got in tight on him with the camera.

Again, the area cleared out. Tanner texted at 10:30 and we arranged to be picked up. A minute later two red heads showed up in the hay bale area up the hill, on the opposite side of the fence. I called at them and one gobbled and started down the hill right away. The other gobbler hurried to catch up and they went back and forth in the lead as they came down to the bottom of the hill … where we were set up. I texted a message to wait. 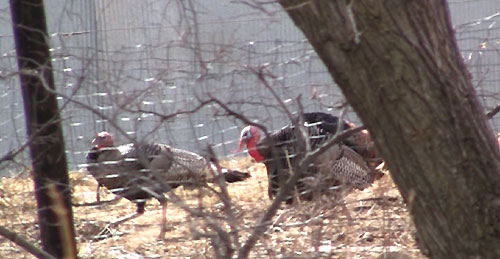 When they got to the bottom of the hill they were 55 yards away. They moved up to the hog wire fence and watched for the source of the calls (which I was not doing while they were looking). 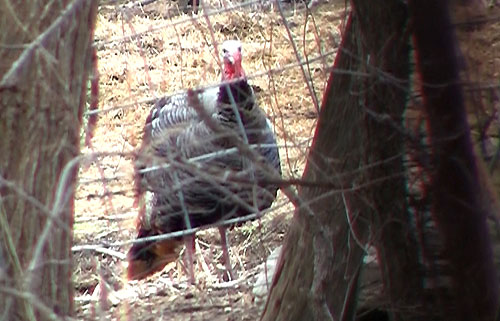 The two longbeards split up. One continued along the fence to the corner and ducked under a low spot. I called at it and the gobbler walked closer and came up to the side of the blind. I heard it drumming but couldn’t see it. 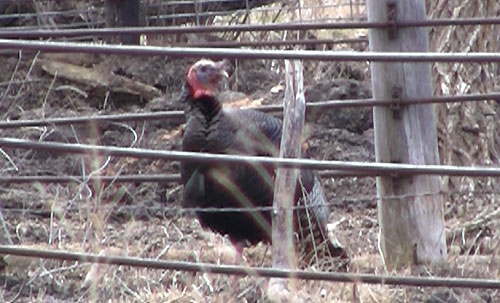 Meanwhile the second gobbler walked uphill along the same fence and then flew up to the top rung of a metal gate. 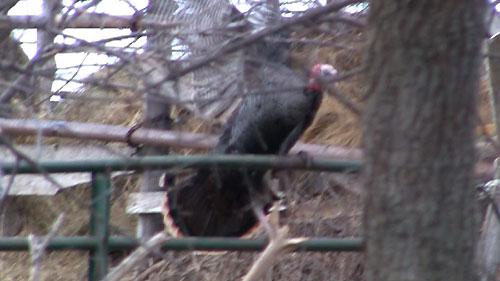 Then it flew down to the ground — less than 40 yards away. But it did the boot scoot boogie when some hens walked over the hill into view. 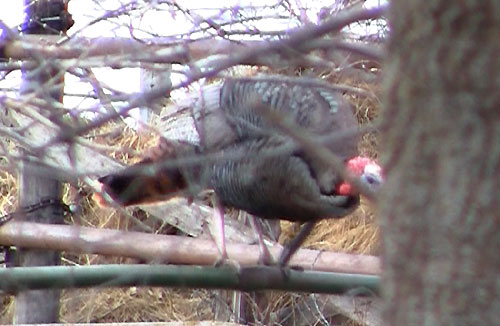 I waited half an hour and texted Tanner to come get us. Fred Lutger was waiting for us back at the Double K lodge. He had a gobbler. We took pictures and went to the Ranch House for lunch. 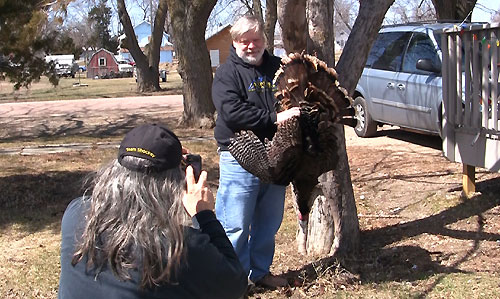 That afternoon we did the run and gun but saw gobblers but didn’t get anything working. Tomorrow morning we have to leave early to take Fred to the airport in Lincoln, Nebraska. I could get in one last hunt as long as we cut it off at 9:30 and hit the road by 10:00.