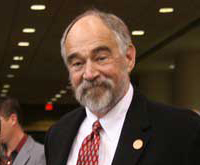 Pioneer bowhunter William “Chief” Compton and instinctive shooting guru G. Fred Asbell were inducted into the Archery Hall of Fame on April 7, 2011, during the Pope and Young Club’s 50th Anniversary Convention in Rochester, Minnesota. They are the 66th and 67th outstanding members of the North American archery community elected into the Hall of Fame since the initial induction ceremony in 1972.

Noted archery historian, Joe St. Charles, inducted Compton into the Archery Hall of Fame during the April 7 ceremony. T. J. Conrads, Founder of Traditional Bowhunter magazine, accepted the AHOF plaque recognizing Compton for his contributions to the sport of archery.

William John Compton (1862-1938) was born in Michigan but grew up in Nebraska. He later lived among the Sioux, learning to make bows and arrows and honing hunting skills with his hand-crafted weapons. Compton moved to California in 1930 and soon befriended archery enthusiasts Dr. Saxton Pope, Arthur Young and Ishi, the last Yahi Indian. They became inseparable, building bows and hunting northern California together. It was Pope and Young who hung the name “Chief” on Compton, and it stuck.

The influence these trailblazers had on modern bowhunting cannot be overstated. Their hunting adventures, well documented in outdoor periodicals and two popular books authored by Dr. Pope, inspired legions of 20th century archers, including the legendary Fred Bear. All eventually took their rightful place in the Archery Hall of Fame, with Compton’s recent induction completing the circle of friendship that began nearly a century ago.

In 1947, the National Field Archery Association honored “Chief” Compton by creating the Compton Medal of Honor, presented to excellent archers who have long supported the sport. Also, in 1999, the Compton Traditional Bowhunters was founded to encourage the growth of traditional bowhunting.

Fred Asbell, longtime President of the Pope and Young Club, founding director of the Compton Traditional Bowhunters and immediate CTB Past President, was inducted by Marvin Cochran, current President of the Compton Traditional Bowhunters. A bowhunter since 1961, Asbell served as Bowhunting Director of the Indiana Field Archery Association and was Founding President of the Indiana Bowhunters Association. He served as Hunting Editor of Bowhunter magazine for two decades and is current Shooting Editor of Traditional Bowhunter magazine. His best-selling book, Instinctive Shooting, has been reprinted half a dozen times, sold more than 75,000 copies, and published in three foreign languages. Asbell also has authored three other books and hundreds of magazine articles.

“We are proud to welcome G. Fred Asbell and William “Chief” Compton to the Archery Hall of Fame,” said AHOF President M. R. James. “They now take their rightful place beside the previously honored men and women whose contributions to our sport have earned them nationwide recognition and respect.”

For more go to: Archery Hall of Fame