Conservation At Its Finest

Jana looks on as the biologist tag and collar the first elk cow of the day.

Over 25 years ago I sat among a roomful of boys during my Hunter’s Safety Education class, not fully understanding how important the role of hunting would play in my life. Reflecting back on that class, I feel a sense of gratitude towards my father who had the foresight to understand what a fulfilling life I would lead if it included hunting and an appreciation for the great outdoors. Little did I know that my passion for bowhunting would turn into a full-time career and a platform for conservation.

Currently hosting a new hunting tv show called ‘Skull Bound’, I’m excited to feature the indisputable partnership between conservation and hunting. While today’s television is filling our homes with images of ‘real’ housewives, toddlers in tiaras and young hollywood socialites, it’s my hope that ‘Skull Bound’ will show viewers that the planet and it’s wildlife is being enjoyed and protected by the true stewards of the land… hunters.

A few weeks ago I had the privilege of watching our conservation dollars hard at work in the Bitterroot Valley of Montana. Filming the process for an episode of ‘Skull Bound’, The Fish, Wildlife & Parks Department (FWP) began the first phase of a three year elk study in hopes of better understanding the declining elk population. A New Zealand helicopter crew was hired to capture over 40 cow elk with net guns in a four day period. The FWP biologists’ goal was to collar and tag the elk while also gathering crucial information regarding the elk’s overall health through blood samples and ultrasounds.

After spending 20 minutes in the care of the biologists, the elk are released to rejoin the herd. The collared elk should also lead researchers to migration routes and calving grounds where FWP biologists will capture and radio-tag newborn calves in the spring for phase two of the study to record mortality rates and investigate causes of death of calves. “The issue of balancing large carnivores and prey such as elk is a priority issue for FWP across Montana, and hopefully this study will help us and others improve our management,” said Mike Thompson, FWP Region 2 wildlife manager.

During the afternoon of filming, the helicopter crews also spotted a pack of wolves in the area and were able to capture and collar two of the pack. The collared wolves will provide important data that will aid in understanding the pack, its members, travel routes and habits for up to five years, the lifespan of most collars.

A study of this magnitude is costly, not just in terms of dollars but also risk. From the hazardous flying conditions of the heavily forested West fork to the simple danger of working with large, wild animals the crews and biologists work together to manage the hazards because of their passion for improving wildlife Conservation At It?s Finest management and protecting the natural resources of Montana. Many speculate on the cause of the decline and low calf survival rate, but true science is needed before action can be taken to better manage the elk and predators of the area. The wolf debate has been a heated topic in the West even before their reintroduction into the Greater Yellowstone area in 1995. From the outfitters and hunters to the incomes and salaries of those who’s lives depend on the hunting industry, the consequences of declining herds are devastating to many while this topic remains tied up in the court system. 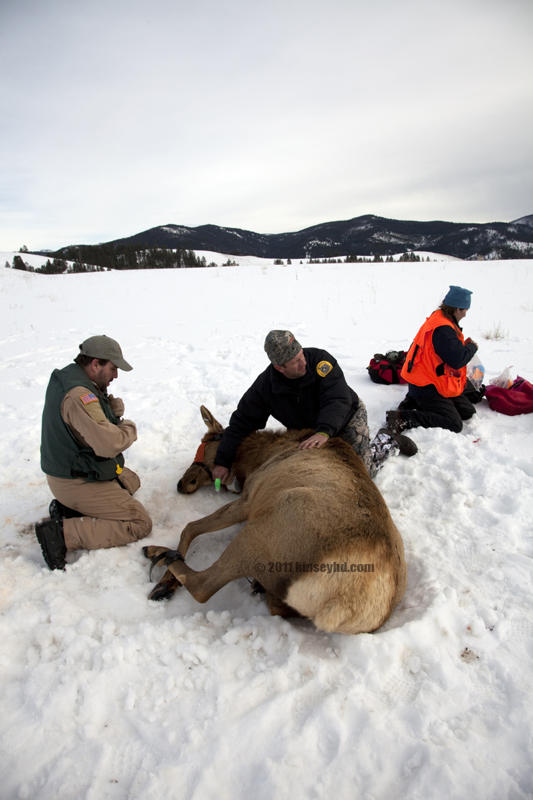 As a member of Safari Club International, Ducks Unlimited, Horns N Heritage and many others, I’m consistently learning ways that these hunter-based groups are preserving, protecting and restoring the natural environment, ecosystems and wildlife that our incredible country has to offer. While this study is costly it is also critical and imperative in providing valuable information which may help in protecting an elk herd who’s death rate could soon surpass it’s reproduction rate. A large portion of the funding for this three year study is being provided from hunter-based conservation groups such as the Rocky Mountain Elk Foundation, Safari Club International, Hellgate Hunters and Anglers, Montana Bowhunters Association, and Horns N Heritage. It’s another example of the undeniable fact that hunters are in fact animal lovers and committed to preserving our country’s heritage of conservation. Mostly operating by volunteers and fundraising efforts, such conservation groups are hard at work trying to protect the land they love and the precious resources that inhabit it.