by Rich Walton
in Bowhunting Posts
0 0
A A
5 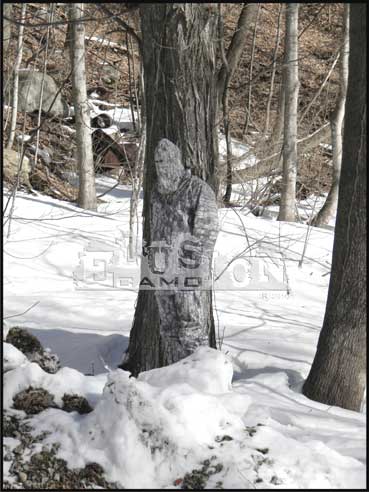 Folks, I have been involved in archery and bowhunting since 1964. During that time span, I have used probably EVERY camouflage pattern available. Some of those patterns and companies are no longer around.

If there is anything that upsets me more than MISSING the shot at a whitetail deer, it is being detected by that deer negating the shot opportunity. Trust me, this has managed to expand my vocabulary of “4 letter words”more than anything else.

Like many of you, I spend countless hours practicing with my equipment to become proficient and I also spend many hours scouting my hunting area reading sign and placing treestands and ladderstands in strategic locations for success and I adhere to a stringent human scent control process assuring my hunting success and then, I have a deer detect my presence due to ineffective camouflage.

I have noticed the “trend” many camouflage companies are following is incorporating too much dark color into their patterns. I have noticed MANY camouflage patterns starting to get “blotchy” and resulting in the “crow in a snow bank” effect within a short distance. I realize if I notice it, a whitetail deer, or any wild game animal, is going to notice it also.

Well, being an “Internet-Junkie,” I frequent many outdoor related websites and forums and while browsing Facebook, I noticed ELUSION CAMOUFLAGE and I decided to visit their facebook page. I am GLAD I DID.

When their page opened, I immediately noticed some patterns displayed and I began to click on each and every pattern they offered. WOW…WOW and DOUBLE WOW!! It is NOT everyday that I see something that just “reaches out and grabs me” but this company is “GOING PLACES.” and FAST.

I have had the pleasure of hunting the swamps, hardwoods and creek bottoms of Michigan, Minnesota, Wisconsin, Ohio, Kentucky, Pennsylvania, Illinois and of course my home state of Indiana.  I noticed ELUSION CAMOUFLAGE offered patterns that would be adaptable to EVERY situation I have EVER hunted. Their patterns will “blend in” in ANY location and surrounding. I could not have been more excited if I had seen Dolly Parton wearing a bikini..(Well, maybe not that)

I decided to send an email for information and a few hours later, I received a telephone call from Mr. Lee Dufresne, Founder and President of ELUSION CAMOUFLAGE. Being an outdoor columnist, I have the opportunity to meet and talk to many company representatives and I confess, MANY are less than receptive but I soon discovered Mr. Dufresne was a very gracious man and talking with him was indeed an honor and pleasure. I was given the honor of conducting the FIRST official interview with ELUSION CAMOUFLAGE.

Mr. Dufresne and I talked about bowhunting and his desire and future plans for ELUSION CAMOUFLAGE and I noticed a sincere dedication in his voice as he humbly credited his father, grandfather and great-grandfather for his love of the outdoors.

I was so enthralled, I was very humbled when I was offered a position on their Pro Staff/Media Relation Liaison Staff and I am indeed anxious to begin what I hope to be a LONG career as a member of the ELUSION CAMOUFLAGE FAMILY.

When I began my writing career, I made myself and my readers a solemn promise that I would NEVER endorse a product that I would NOT spend my “hard earned” money for and I remain dedicated to that promise. I can assure you that on ALL my future hunting adventures, I will be utilizing what I personally consider to be the GREATEST CONCEPT IN CAMOUFLAGE TODAY and that is ELUSION CAMOUFLAGE.

South Dakota: Gobble On Over

Big 5 Quest: What I Will Take To Africa