Fred Gets His Osceola Too

“Here he comes!” I looked down the logging road and saw a dark spot in the small pine trees at 80 yards. I watched, not knowing if the object was a turkey or not. I yelped and the dark spot fanned it’s tail. I was looking at a full mature fan of a Florida Osceola long beard wild turkey.

This was the first day of my hunt with David Mills at Williams Hunting Preserve just outside Arcadia, Florida. Today was the start of Bowhunting.net’s 2011 Wild Turkey Grand Slam bow hunt. This year Robert Hoague and myself are joined by cameraman and hunter Collin Cottrell.

Bow hunting wild turkey is a challenge. Bowhunting for North America’s wild turkey grand slam is the ultimate challenge times four. It all starts in Florida. Florida is the home to the Florida wild turkey species, also known as the Osceola turkey. Florida is the only place in the world these birds exist. If you want a grand slam, you have to hunt here.

Good friend, David Mills, is the game manager for Williams Hunting Preserve. Readers of Bowhunting.net have seen his name several times from past hunts we shared. The most recent was Robert and my alligator hunt last September, a hunt Robert and I will again pursue in the near future.

David introduced me to Paul Byrd. Paul had scouted out some gobblers and was going to be my guide and cameraman on this hunt. An hour before day break Paul and I loaded blind, chairs, decoys, my bow and backpack in the back of Paul’s truck. A short drive put us in the area Paul had been scouting. I set up the blind as Paul drove the truck back down the road and parked it out of sight.

The excitement began as we placed the decoys and Paul gave me the lowdown of the area. We sat in the blind and waited for first light and first gobbles. We looked at each other on the first gobble and smiled. The bird was to our front, a few hundred yards away. A second gobble sounded behind the blind. It was closer.

The gobbling was sporadic. Dave had given Paul instruction to let me do my own calling. I remained quiet. Paul looked at me a little strange and asked if I was going to call. I told him I wanted to wait until the birds were on the ground. I took in the moment and listened to the awakening of the morning and the first day of this years hunt. Spring was on in Florida, a welcome time after Chicago’s long winter.

The gobbling stopped. I was sure the birds flew down. I did some yelps with my mouth call and had the far turkey answer. He was closer.

I pulled out my arsenal of slates. He answered both my aluminum and my natural slate calls. Time passed and the birds were still. I got a call from Robert. His bird was down. I asked if it was a longbeard. Robert replied it was.

We hunted until 11:00 am without a sighting. Paul wanted to check out another area that we could walk to where he had earlier this week spotted birds.

We walked a few hundred yards and I yelped with my mouth call. I had a new diaphragm call given to me the night before by Shane Herdershot. Shane makes his own calls. He was down from Zanesville, Ohio with his buddy C.J. White from Port Clinton. They were here to hunt a few days. This was their first Osceola hunt.

Shane Hendershot won the NWTF Senior Open Grand National Championship calling contest in Nashville two years ago. And guess what? He won it again this year. And not only that, he also won the head to head calling championship. This was the first time the NWTF had this contest, Shane is a two time champion in one year. How about that!

Did the yelps work? They sure did! Paul and I heard multiple gobbles. We ran forward 50 yards to a logging road and ducked behind a big palmetto patch. Paul belly crawled around the palmettos and eyed 4 jakes and a long beard 100 yards down the logging road. He laid on the ground and pulled his leafy wear hood over his head. I got on the far side of the palmettos.

We made a plan.

Paul would stay put, eyeballing the birds. I called from my hidden position. I told Paul to watch the birds and tell me when to draw before the birds got in my view. I knew I had to draw hidden and let the birds walk past the palmettos. The birds were coming on. Pall told me twice to draw but I couldn’t hear him. The birds were 5 yards on the opposite side of the palmettos. They got a little antsy and turned and made a slow retreat. They didn’t spook but they headed away from us.

I eased around the palmetto patch and glassed them at 100 yards. The long beard was a dandy. Paul and I headed back to the lodge for lunch.

After a quick sandwich we headed back to our last encounter and set up our blind for the rest of the day’s hunt.

We could see a hundred yards down the logging road. There was a hog fence on the opposite side of the road. We put two hen decoy near the fence.

We were just settling in when I looked up to see a jake 5 yards from our blind heading for the decoys. I quickly tapped Paul’s leg and told him to turn the video camera on. I picked up my bow. 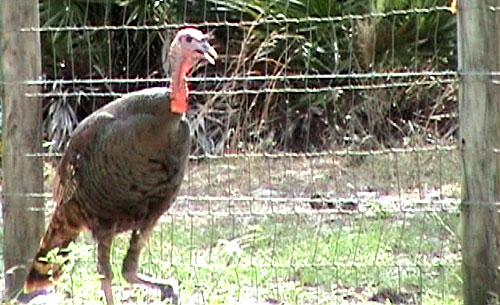 The jake didn’t stop at the decoys. He headed right down the logging road and was soon out of sight.

Everything was quiet for the next hour. I made a few sporadic calls and played with my two friction calls.

I saw what looked like a turkey on the far side of the road standing in some short pines. I yelped and I saw him break into a full strut and he gobbled at my call. Paul turned on the camera. I could see the mature tail on this bird as he strutted his way toward us. He was on the opposite side of the nearby fence. 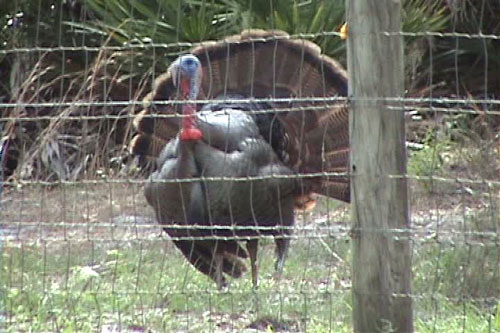 On our side of the fence, in the road, I spotted a jake coming our way. He kept pace with his long beard buddy and the two were soon within 20 yards of our decoys. I told Paul I would shoot the Jake. I didn’t want to take the chance of hitting the hog wire fence, I would pass on the long beard.

As the two birds approached our decoys, I saw a hole in the fence. The long beard was a few feet from it and would pass by the hole when he got directly behind the decoys.

I whispered to Paul, “There’s a hole in the fence. I’m going to take the long beard.”

The gobbler lined up with the hole. Paul zoomed in on him.

I released my F1 Fireball and Paul got the hit on video. The Grim Reaper passed through the gobbler who wobbled sideways and stumbled into the palmetto patch by the fence. He disappeared momentarily and then we saw him try to fly and he went down immediately.

Paul was quick to congratulate me, but I was skeptical. I always worry if I don’t see a dead bird in sight. We waited 15 minuets. We eased out of the blind and down the logging road to the last sighting. We heard the bird rustle in the palmettos. Paul cleared the fence and made the dash to the bird like a true Olympian. I heard nothing but fighting and rustling as Paul disappeared in the thick patch. Paul’s head poked out of the palmetto patch with a big grin. I knew he had my bird.

I called Robert and passed on the good news. Paul and I walked back to the blind and took pictures of my Osceola longbeard. What a great day! This was my 4th Osceola with a bow. None of the hunts were easy. But this one was the quickest. Paul and David’s pre-scouting put me and Robert right in the birds. Paul got the kill on video, a real bonus to the hunt.

The next morning I got some much needed sleep as Collin and Robert headed to the woods. Robert pulled camera duty and Collin picked up his bow. It was a quick morning. I got the call back in camp, Collin had his bird down. Robert captured the kill on video. But this is Collins story to tell and it finished up a quick Florida trip.

Stay tuned. We have more birds to pursue on or 2011 bowhunting.net grand slam quest. 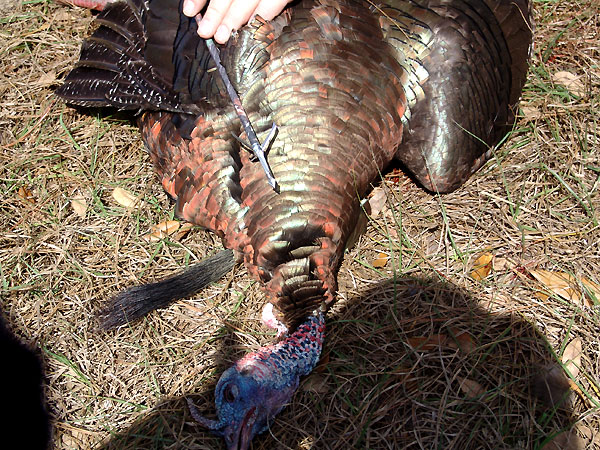 EQUIPMENT: Fred used a F1 Fireball by Alpine Archery set at 70 pounds. His broadhead was the 100 grain Grim Reaper Whitetail Special with a 2-inch cut. He kept the annoying, biting Florida mosquitoes away with a ThermaCELL.

Tested in the Field