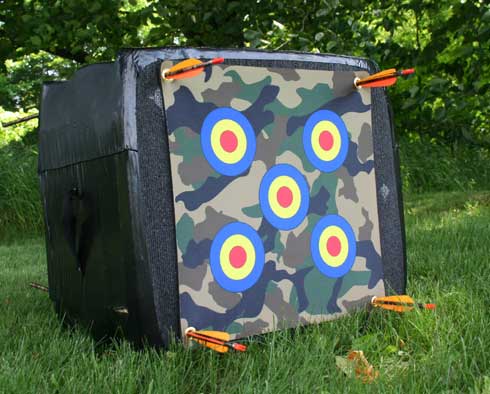 I have a favorite target that has seen many years of use and hopefully will get me through a couple more. Only problem is the woven material that makes up the face is shot up pretty bad. No problems though because I have found the solution to target face wear-out from Arrowmat. The great news is that now any archer can repair that worn out face of their target with a great looking new face for around 15 bucks.

The Arrowmat is made of a closed foam rubber material with a tough, neoprene face, which has amazing self healing properties. When I first opened the package of the camo bullseye design, I thought it was similar to the material of a mouse pad, just thicker. Each Arrowmat target face comes with four mounting grommets in the corners. I easily attached my new Arrowmat by using zip ties to anchor the grommets in the four corners of my nylon web-faced archery bag target.

The best feature of the targets is the self healing quality. The target keeps its vivid color properties and from 20 yards looks as though it has not even been shot. Arrow removal is easy as the arrow slides from the rubber target with no problems at all. Also, pulling the arrow from any angle doesn’t cause larger holes or tears. A fine indent is the only thing visible after arrow removal.

The targets come in three series. The ‘Just for Fun’ Series has a regulation size dartboard, a deck of cards and a five bulls-eye camo target. The ‘Wildlife Game’ Series includes three popular game images including a whitetail buck, a bull elk and a mature male turkey. Each image is broadside so as to help you with arrow placement. The third series is the ‘Competition’ Series and comes complete with a 4 Color Round, a 3 Spot and finally a 5 Spot target.

If you have a young one starting out, then I recommend the ‘Just for Fun’ Series. The practice series will last a lot longer and the kids will have fun competing in cards games.

If you have more than one target I found that you can loosely zip tie the corners of multiple Arrowmats at the top edge of your target and simply flip them if you want to change quickly between each target face. After the kids get done shooting cards, I simply flip the target up and it lays nicely out of the way on top of the bag target. No need to anchor the bottom corners as the weight of the Arrowmat and the rubber material keeps it firmly in place.

Each target can be purchased separately or can be purchased in the series for an approximate five dollar savings. Or for even greater savings you can buy the entire collection of all nine targets. For a club or organization the savings to your targets over a season will more than make up for the cost. 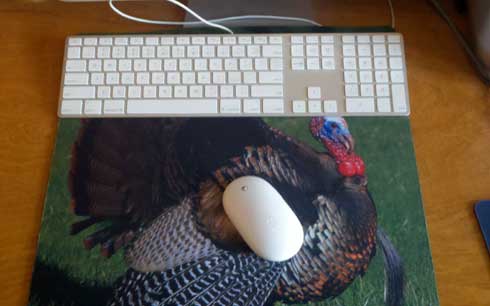 In conclusion I might add that the Arrowmat makes a great keypad and mousepad combination for my office. While working at my computer I can look at the quality turkey image and dream of arrowing a nice Tom. Well that gave me an idea and I used a second Deck of Card design as a mousepad and mat for my keyboard.

If you need to replace your target, or want something sturdy and different to make practice even more fun I highly recommend you look at Arrowmat.

Their web site is: www.arrowmat.com