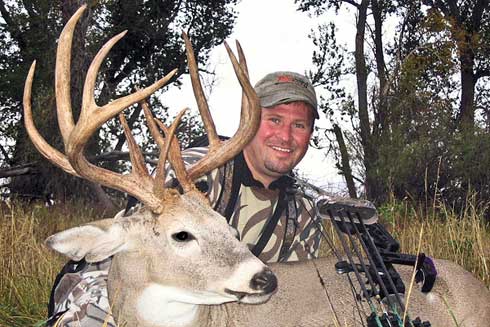 Keith sat back and watched as the Montana giant entered the alfalfa field 150 yards from where he was perched. He’d studied this buck throughout the late summer months and was intimately familiar with the deer’s habits and travel patterns. Careful to make a mental note of the trail the buck entered on, Keith waited until darkness completely engulfed the field before exiting his stand. Even then he was in no hurry to leave the deer woods. Unstrapping his hang-on-stand he cautiously eased over to the area where he’d seen the buck come into the field. After selecting what he believed to be the appropriate ambush site he reattached his stand.

The following evening the excitement intensified. ‘Mr. Big’, a mid-140’s buck, so named because of his massive body structure, passed by at 50 yards. Although the buck was out of range, Keith couldn’t help but smile. After dark he made one more adjustment to his stand set-up and left with confidence. The next afternoon Mr. Big ambled by at six yards, paused briefly and allowed Keith to make a fatal shot. The large bodied Big Sky buck only went a short distance before expiring.

Keith Dvoroznak, president of Ripcord Arrow Rests and his father Don have played out this scenario for the past ten years. During this time their combined 73 years of bowhunting experience has allowed them to consistently arrow Pope & Young (P&Y) class deer. Their secret? Get at the bucks early while they’re still visible and in their summer feeding patterns.

Most western states and some Canadian provinces have archery seasons which begin around the first week of September. When I asked Keith what made this such a hot time to be in the stand, he replied, “This is the only time during the hunting season outside of the rut where big bucks are highly visible and relatively easy to predict. They’re still in their summer feeding patterns and this becomes the chink in their normally fool-proof armor.”

Don, president of marketing for Ripcord Arrow Rest, went further by saying, “You get all the advantages of the rut, the biggest being big buck visibility, without having to contend with the frigid temperatures which sometimes occur during that timeframe. Keith and I sit all day this time of year. It’s not uncommon to have monster bucks up and moving during the mid-day hours, just like during the rut, only the temperatures this early in the year may be in the 70’s and 80’s.”

This past season Keith and Don invested in all day sits and netted huge results. Keith spent the second week of September closing in on a heavy racked 4×4 that would gross score somewhere in the mid 150’s. A week of fine tuning stands finally had the giant pinned down. The next day he went in for an all day sit. Early in the day there was plenty of action, but not from the big guy he was looking for.

Around 2:00 PM Keith saw a large rack coming out of a bedding area. It belonged to a buck Don caught a glimpse of a week earlier and was certainly bigger than the 4×4 Keith knew was in the area. As the buck closed inside the 40 yard mark he readied for the shot. Finally, the massive deer gave him the opportunity he had been waiting for. As Keith watched the buck fall he knew he’d just arrowed the best buck of his life. It was a massive main framed 5×5 which gross scored 186” P&Y.

A week later Don was hunting a buck he and Keith had seen on several occasions. Fine tuning his stand location over a couple days finally put him within striking distance. He went in planning to sit all day but never got the chance. At 2:30 PM the buck made the fatal mistake of showing himself. Don’s buck gross scored 168” P&Y.

Don later told me, “Not only did persistence in sitting pay off, but believing in stand placement was also crucial. If I see a deer come out on a trail two or three times in a row you can bet I’m going to hang a stand there. The first time I sit that stand he may not show, even though his track record says he should. I don’t get frustrated, I stay the course. If he’s still in his summer feeding pattern and undisturbed, he’s eventually going to use that trail again.”

A lot of bowhunters hunt the west early in September. A good number of these people consume their time chasing other game species and choose to wait until later in the year to pursue deer. Not Keith and Don. As avid whitetail hunters, they know a good thing when they see it and certainly aren’t willing to let an opportunity pass them by. This duo has learned to capitalize on early season monsters. As an added benefit this opens up their late season to hunt some other prime location in another state during the rut. So if you’re hunting out west this fall take some sage advice from two guys who know deer and deer hunting and ‘get’um while they’re hot.’