Gobbler Down in South Dakota 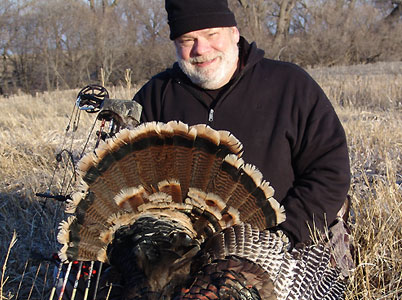 There are three things that greatly improve turkey hunting success, proper scouting, proper set up and patience. Dave Keiser owner of Double K Guide service in Gregory South Dakota sat across the breakfast table with me and guide Jeff Quinn.

“Last night I watched several hens and gobblers roost in several trees in a draw dividing a couple picked corn fields. They are real close to the farm lane dividing those fields from the picked hay field across the lane. I want you and Fred to park at the far end of the lane and walk the lane to the high point of the field near those trees”, Keiser instructed Jeff. He went on with his instructions telling us about the thick Cedar trees along the lane. “Tuck into the cedars with your blind and put the decoys on the opposite side of the lane,” Dave instructed. With detail Keiser gave Jeff and me his ideas and details of the ambush he thought would result in an early morning turkey kill.

That morning in the pitch black, Jeff and I made our way down the lane and found Dave’s described ambush spot. We were close to the roost trees.

Jeff set up the blind as I placed our two decoys on the opposite side of the lane. Our set up was complete just minutes from first light and first gobbles.

This was the 3rd day of my hunt in South Dakota. The two previous days I had several opportunities to shoot jakes that Jeff called right to our decoys, 15 yard shots. I passed hoping for an opportunity for a long beard. Being the last day of my hunt I decided a jake would be a fine trophy.

It was light enough for the turkeys to fly down and within seconds 20 birds were on the ground in the picked corn across from us. Jeff called. Gobblers sounded off. The hens were doing their hen talk. Did I mention this was the 3rd day of very high winds. Our turkey sightings were very sporadic this year do to these winds. The birds were really hunkering down. And that is what these birds did.

As quick as they landed they headed straight back to the trees and the draw dividing the fields. It was hard for us to see the fields behind the trees. The draw was wide and trees were thick. The fields dropped off behind the roost trees and within minutes all birds were out of sight. We glassed the fields in all directions but not a turkey was in sight. They also got tight mouthed and we didn’t hear a gobble or hen yelp.

We sat for an hour and called occasionally without an answer. In my mind the birds had slipped out the draw and headed for the far fields that were out of sight. Turkeys do have routines at times and can cover a lot of ground in a day.

A truck drove past the farm. It evoked a gobble from one of the Toms. To my surprise, the birds were still there. Jeff got out his box call and really cranked out some loud yelps. One gobbler responded.

“There he is,” Jeff exclaimed. A gobbler came out of the draw and headed our way. Jeff kept up the yelps and the longbeard broke into a full strut at 40 yards. This is a little out of my comfort zone for a shot so I waited.

Here comes two more gobblers. They are jakes. They ran right at the strutting Tom. The longbeard tucked tail and fled down the field edge away from us. The two jakes took his place and one of them broke into a strut and started courting our two hen decoys.

It was my last day to hunt. The winds were still howling. The jake was now fair game. I released my Fireball and hit him low. He went straight down and was now in a sitting position looking around. Jeff whispered, “Get another arrow ready.” I did, just in time as the bird stood up. Jeff instructed me to use the same pin and hold it level with the birds back. I did. It was a solid hit. The Jake ran toward us to the left. Jeff flew out of the blind and gave chase on foot. They both disappeared behind our cedar cover.

“Fred, over here and bring your bow!” shouted Jeff. I ran to Jeff and he quickly informed me my bird just ducked in-between the round hay bales in the field. We crept up and looked down a double role of bales 10 deep. My bird was at the far end hiding between the last two bales. I couldn’t shoot him in this position.

We made a plan. Jeff went to the far end and was going to chase the bird back my way. I told Jeff to be quick and duck behind the bails when the bird got up if I had to shoot his way.

Jeff approached the bales as I watched from the far end. The bird didn’t move. Jeff backed out and signaled to me he was going to dive on the bird. In a flash Jeff was airborne and made a jack knife dive over the first bale and landed on the bird.

Jeff was up and out, just as quick, clutching my bird. 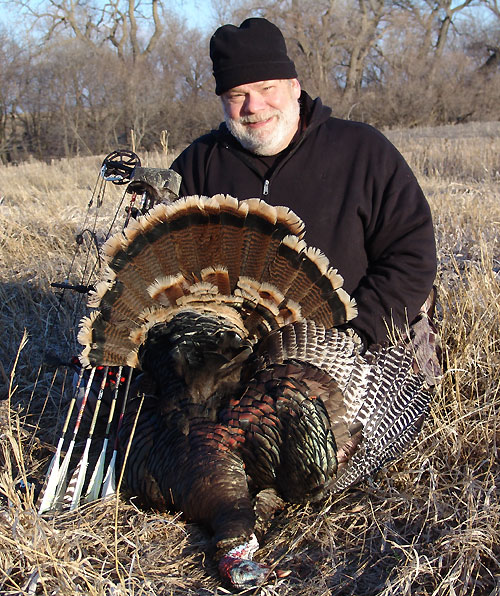 All three days in South Dakota were fun hunting. This was my 4th hunt and my 4th gobbler with Double K. Guide Service  Each year I look forward to this hunt and the fun we have with Dave Keiser and his crew. The hunting is fantastic but the fun and friendship is what brings me back.

Thanks Dave, Jeff, Tanner and the whole crew at Double K. Like Arnold says, “I’ll be back.”

Join Robert and me and Bowhunting.Net on next years Double K Guide Service wild turkey hunt. It is always a hunt to remember.

I’m off to Illinois to hunt Eastern wild turkeys and do some guiding. I’ll report in and hope to have a few turkey pictures. And then off to Texas for those hill running, rattlesnake jumping, cactus dodging Rio Grande turkeys and the last leg of this years Bowhunting.Net Wild Turkey Grand Slam.

Good hunting. Be safe and enjoy Gods’ awaking of this spring in turkey country.

EQUIPMENT: Fred used a F1 Fireball by Alpine Archery set at 70 pounds. His broadhead was the 100 grain Grim Reaper Whitetail Special with a 2-inch cut.