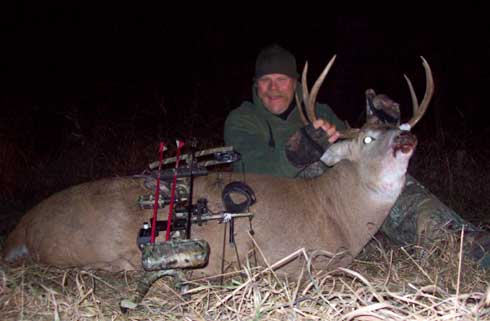 Author with his 'Pinks' taken buck.

I met Mary Hale, Director of the Pink Arrow Project, at the National Archery Show in Las Vegas in 2007. As we talked, she told me of a new pink arrow and showed me one.

It surprised me at how bright pink it was and she told me that it was to signify her determination to fight breast cancer.

I told her I was interested in having some as I had lost a sister to breast cancer about 10 years earlier.

Mary told me she wanted to see every woman shooting pink arrows and every man to have at least one pink arrow in their quiver to show support for the Pink Arrow Program. This was Mary’s goal and as far as I was concerned I and everyone I knew would support her. I got a dozen arrows from her and when I got home, I put one in my quiver.

It seemed every shoot I went to and every time I was hunting someone would ask me why I had a pink arrow. It wasn’t so much the question but it always seemed the people were thinking I had a kid’s arrow in my quiver and thought they were going to make fun of me for having it.

I looked forward to each question as it gave me the opportunity to explain what that pink arrow signified. This is one of the many ways I had to let people know what the project was intended to do and it had a sobering effect on everyone I spoke to. The vast majority wanted to help and asked where they could get some.

Then one day while practicing I decided to shoot the pink arrow that had been in my quiver for months. Pink arrow aside, I was really impressed as to how well it flew. That gave me the idea that I could start hunting with my pink arrows.

In October of 2007, I made my yearly trip to North Dakota to hunt whitetail deer. This was my first hunt to try out the “Pinks” as I call them. I knew they flew well but I wanted to see too, just how tough they were. I shot 2 does with other arrows because I was saving my Pink for a buck. The opportunity presented itself on the 4th day of the hunt when I had a complete pass-through on a nice buck. We found him that afternoon before I was to head home. I had my buck and my arrow had also survived the shot.

After getting home to Arizona, I decided I would continue hunting primarily with my Pinks but also had other arrows in my quiver. The arrow that killed my North Dakota buck was my primary and was always my first shot.

I decided I wanted to see how tough this pink arrow was and the conclusion; it  is one tough arrow, regardless of the color. So far I have ‘Pinked’ 1 Rio Grande turkey, 4 hogs, 1 raccoon, 3 javelina, 3 whitetail bucks and 9 does. All with that one arrow.

All good things end it seems and last November I shot a doe with the same arrow and got another complete pass through. This time however I was not able to find the arrow because it went under 6 inches of snow. While this ended my string of animals taken with this single pink arrow I have a feeling it is snuggled under the snow in perfect shooting condition just waiting for the thaw when it will be found by some backpacker or hunter. Who knows, maybe the string of game will continue only with some other bowhunter doing the shooting.

The Pink Arrow is tough for sure but another other nice thing about shooting pink arrows, along with the fight against breast cancer, is they are actually pretty hard to lose because they are so bright.

Craig, my guide in North Dakota has carried a Pink in his quiver the last 2 years and killed a doe with it so far. His wife Carol started shooting a bow last year and also carries a Pink arrow in her quiver. They lost a friend to breast cancer a few years back and gave me the idea to put the person’s name on the arrow vane. So, now my arrows carry my sister’s name.

The Pink Arrow Project has turned into a fantastic cause that I am proud to be a part of. I hope every archer will go to their dealer and join the fight. Buy a doz and put the in your quiver, urge your friends to do the same because a portion of every purchase of  Pink Arrows, the Official Pink Arrow, goes back to fight breast cancer.

Together we can all help make a difference.

For more information or to join the fight go to: Pink Arrow Project

Hunting In The Wind Tunnel

Back At The Farm