This was it. The absolute last hunt in South Dakota. At daylight we were above the Missouri River in my Double Bull. There was good news, the wind was light … and I heard yelps and gobbles. So they would hear me too.

Across the Cooley, on a ridge 600 hundred yards away, the yelpers and gobblers came out of the trees and into view.  There were lots of them and more joined the party.

When the sun poked through the clouds it shot rays of light across the land and lit up the fans of some of the distant strutting gobblers. It was beautiful. 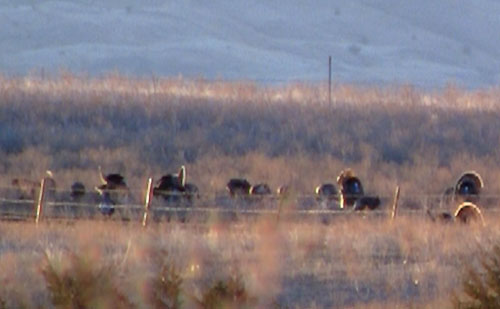 I went to work and did some yelping of my own.

I yelped, cut and did some “here I am” calls. And bingo, a longbeard 600 yards away walked away from the pack and starred in my direction. I cut for all I was worth and shut up. He liked it.

And hurried to a higher position and stuck up his fan and poked his head up as high as he could get it. I gave him 6 cuts and waited.

Oh yea, he walked with a purpose along a fence that led to my hill. As he advanced he gobbled on the go.

Between gobbles he fanned out and strutted his stuff. He was making good time.

Soon the gobbler was directly across from the blind. He still had 250 yards to travel. And he looked good to go.

He knocked the difference in half and stopped. I did 4 yelps and got quiet. He went on the move again.

There was a little dip 40 yards away and stopped at the edge of it and looked things over from the dried prairie grass. 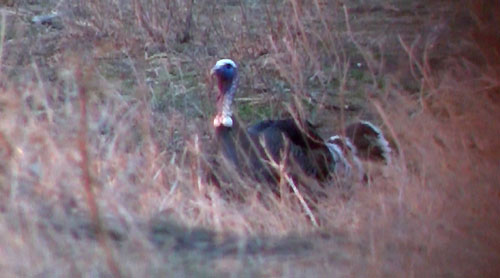 I waited several seconds and made 3 cuts at him.

Tanner was parked on a hill where he could glass the area I was hunting. He texted that the gobbler kept going. At 9:00 Collin and I broke down the blind and Tanner picked us up and drove back to the lodge. We said our good-byes and chunked our gear in my truck.

Collin set the GPS for the airport in Lincoln, Nebraska and we were on the road again.

We arrived at the Lincoln airport and Fred got his luggage and bow case and went inside to check in for his flight. Collin and I aimed the BowMobile for home and soon Nebraska was in the rear view mirror. 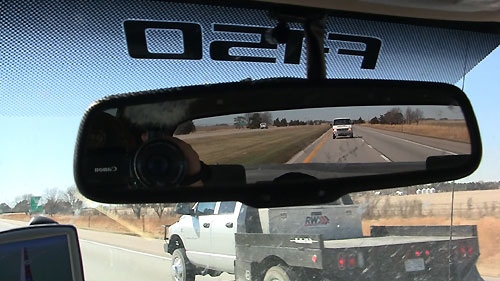