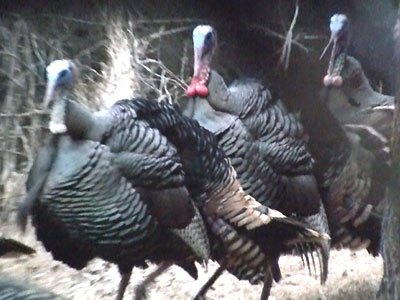 We zoomed through Texas, Oklahoma and Kansas into Nebraska. Collin Cottrell and I stopped at the Lincoln, NE airport to pick up Fred Lutger. Then we drove another 6 hours to a friend’s  ranch and unloaded our hunting gear. Then we ate supper and talked longer than we should have, considering how early we had to get up in the morning. 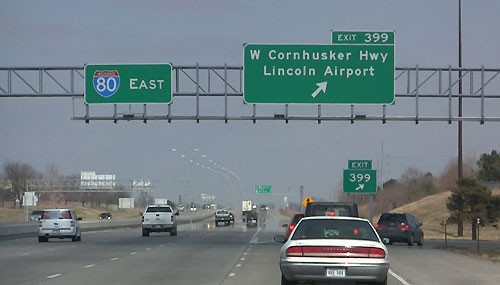 When the alarm sounded off the 3 of us went down stairs for coffee and a hearty bowhunters’ breakfast of doughnuts, sweet rolls and hot oatmeal. The first cup of java in the morning is always a good one.

After breakfast Fred trudged off toward a picked corn field. Collin and I went to a hill that Fred and I have hunted before. We got set up in the dark and then sat quietly, waiting for whatever was in store for us when daylight slipped in and the wild turkeys flew down. We heard gobbles from the direction of a big roost.

The first bird we saw was a lone hen that approached my taxidermy jake decoy.

Meanwhile the gobbles got louder. They may or may not be headed for our hill but they were definitely coming in our general direction. Some jakes and hens came out of the woods above us and hob nobbed with my decoy.

Stepping out of the dark shadows of the ceder trees uphill and to our left, a Merriam’s strutter announced his presence with a booming gobble and eased up on a hen and another gobbler.

Some gobblers came from below us on the hill to the strutter. They made a lot of racket, chasing each other around, and gobbling. 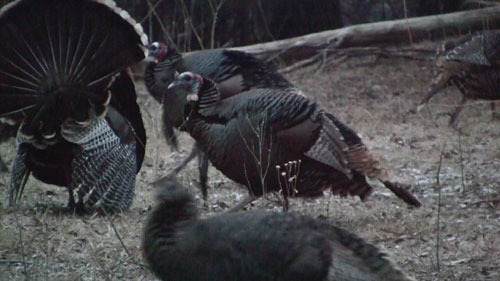 There was no lack of strutting for the hens. And the persistent gobbling drew in more hens, jakes and longbeards. 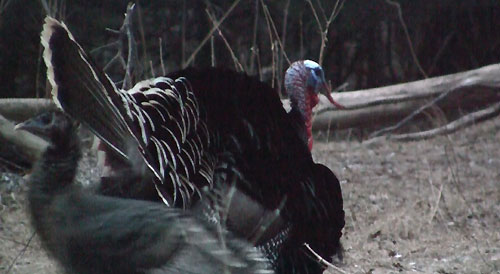 And just as quickly as it had started, the big group of wild turkeys left us sitting all alone. From a peephole in the downhill side of the blind we saw the group move away from our hill and separate into two groups. One went to a nearby farm road and up and over the hill to the west. The other group went into the picked corn field where Fred was hunting.

Half an hour later we saw some gobblers above us on the crest of the hill. I called and they meandered along until they were in the opening in front the blind.

More came down the hill; hens, longbeards and jakes. They were always a little bit out of bow range but the zoom on the camera brought them in close.

The gobbler trio strutted up and showed off for a hen. The largest longbeard jockied ahead and got in front of the other two Toms. 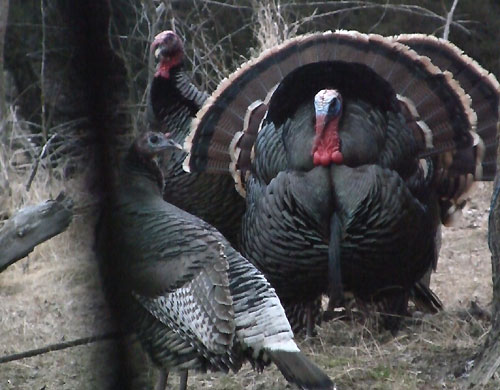 The hen wasn’t interested and the gobbler trio went back the way they came. And as par for the course this morning, they passed us about 5 yards too far away. 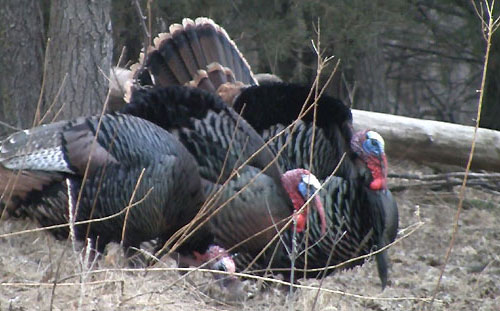 In minutes the area was clear of wild turkeys. We couldn’t even hear any gobbles.

Right mow we were thinking the same thing you are probably thinking. MOVE THE BLIND UPHILL to the woods on the opposite side of the opening. And they stuck to the edge of the woods across from us.

We waited 15 turkey-less minutes and … ALL HECK BROKE LOOSE…