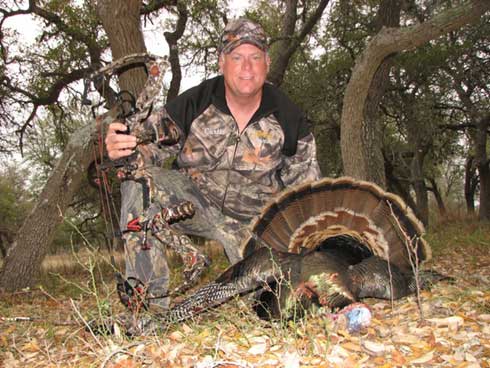 Curtis with his first mature gobbler.

What can you say about Opening day of Turkey Season? Well for one it’s the break from winter and the start of 4 to 8 weeks of non stop hunting from daylight to dark! Loss of lots of sleep, I can sleep after the season. Loss of lots of meals and Lord Knows I can afford to miss several meals after a tough winter of Holidays and Trade Shows. But the best part is getting my bow out and chasing those Gobblers that are in the prime of passion.

Usually, by the time Turkey season arrives I have practiced enough in my truck, a word of warning to you thriving apprentice “NEVER PRACTICE AT HOME” you will be in the dawg house with your wife or girl friend for days, weeks, months! Believe me I know from past practicing. I have my bow, arrows and broadheads ready to go. Usually I have done some scouting trips to the area I’m going to hunt. Therefore, when I arrive at the Turkey woods I’m ready to set up my blind and Kill Gobblers. Now you know the best laid plans of mice and men always go awry.

Prime example, this spring 2011 I was invited by my good friend Curtis Kuhlmann, to go to one of his spots. Well opening morning found me on a ranch I had never been to before.

We arrived one hour before daylight and neither of us had any idea where we should go. We only knew the landowner said he had a ton of Gobblers on his place, Good enough for me so we drove around for about 20 minutes until it was starting to break daylight. I finally told Curtis to stop so we could get started. It looked like a parade with me, Curtis and my cameraman Rusty driving around following each other.

Well, we stopped and took out our 2 Mathews Edition Blinds out and set them up, one for the camera man and one for the 2 shooters. I set out my Flambeau Strutting Gobbler and my standing hen and by the time we had moved our trucks and got in the blind it was 7:10 AM with a 7:30 AM Sunrise. The wind was blowing hard, the decoys looked like they were going to go into flight any moment and I could barely hear a few Gobblers on the Roost.

Daylight came and went but around 8:00 AM I had a bird Gobble and he was maybe out 100 yards and coming fast. I looked out of my blind to my left and he was on a line and looking at our decoy. I had a Strutting Gobbler and Standing Hen decoys in front of us about 18 yards and this old Jake (a Jake that hatched out early last year) will sound just like a Gobbler but will have a Jake beard. Well he wanted no part of the Strutting Gobbler. I’m sure he had visions of the many butt whippings he had received in the last month every time he got close to a hen. The pain was not worth a fight but he did walk around the couple and kept looking. Couldn’t get a butt whipping for looking could you?

The Old Jake figured it wasn’t worth his time and finally walked off. Then things got real exciting as I called in a couple of hens and they were running in like they were headed to smack down. These hens were P/O’d and went straight to the hen decoy and started very high purrs, cutts, and yelps. I just sat there and mocked those hens and really pissed them off!

This went on for about 5 minutes then they got tired of the game and walked off to their respective nest. By 9:00 AM, I knew it was time to move and find another set up. Down came the Lost Camo Gorilla Blinds and we headed off about a mile away. We set up our blinds, moved our trucks about 400 yards away in a low draw and out of sight. Returning to the blinds we crawled in and like most of the time when moving to a new area I waited about 30 minutes to let things calm down before calling. But this time I cut that time to ten minutes as I had heard a Gobbler behind us. Answering back I cut loose with some small calls, clucks, low purrs and a couple of soft yelps just in case a Gobbler was closer to me than I could see.

5 minutes later I repeated the same calls but added a lost call, which is a series of yelps starting out with low yelps and then building up in volume and ending after about 15 to 17 yelps. Immediately I had a Gobbler sound off and he was hot. I started him with a mating cackle and he gobbled on top of me. I cutt back at him and he was coming covering lots of ground. I looked out to my right and could see him and his Jake buddy running toward the hot hen Note. A lot of times Gobblers will have a watch dog and this will be a jake who he will tolerate to be his eyes and ears.

The Gobbler was now within 30 yards but then got behind some Agraite, a low waist high bush that has lots of small blue green leaves and a small red very sweet berry. Back and forth he strutted, drummed and spit. I knew he wanted to come in but would not close the additional 15 yards to the decoy giving me an open shot.

I quietly asked Rusty if he had the Tom on film. “Yes” he replied and I told him to say “Shoot” when he was ready. Curtis, my 3-D shooter was sitting there watching and waiting for the shot when Rusty finally said “Shoot”.

Curtis had an opening of about 3 inches in diameter and the arrow was off and running with a very loud crack as the deadly Grim Reaper and Carbon Express hammered him. The bird was knocked off of his feet and up like the reflection off of a mirror and was low running from us with 5 jakes right behind. So that was why he would not close the distance! The jakes were spooking the 2 year old Gobbler.

After going about 60 yards he hunkered down and was in a bad way. As turkey will do, those jakes ran up, jumped on our bird and commenced beating the crap out of him. Even in his last moments the mortally wounded bird had no peace so he took off running from our right to left with those crazy jakes in hot pursuit. The race went about 50 yards when the Gobbler hunkered down again and was dead.

Now the back slapping started and let me tell you Curtis was one happy Turkey Hunter as this was his first mature Gobbler. Ladies and Gentlemen this is the way you want Opening day to be.

I want to thank Curtis Kuhlmann for inviting me to go with him to call and the best part this was all on film for a future episode.

South Dakota: Gobble On Over