Foam animal season is just around the corner (or has already started at some clubs)! That means it’s time to brush up on yardage estimation and get ready to shoot at all those 3D animals at unknown distances again.

The reason I love archery so much is because it is so challenging and intriguing. At times I have found myself stumped at some of my best shots and, at the same instance, even more puzzled at some bad shots I thought I executed well. At the point where many give up, I find I am more intrigued. When many think they have reached the point of perfection, they soon realize that, in archery, perfection doesn’t last too long.

When I am shooting well for any given amount of time, I still struggle with range estimation. Why? I’ll admit it; it’s because I don’t practice estimating distances. I should have my range finder on me everywhere I go, and I should be guessing yardages every single day, no matter where I’m at. It’s the only thing that is going to get me ahead and help me potentially win a tournament; I know I have made way too many good shots that were out of the 12 ring because of being off on my yardage.

I’ve read that, statistically speaking, a trained “observer” will misjudge distance about 20 percent of the time. A bowhunter who is a fair shot has a better margin of error than a top tournament target shooter if he practices yardage estimation and the tournament shooter does not. In contrast, many bowhunters don’t realize they should learn to judge yardages even for close up shots. When shooting a deer at 25 yards, depending on how fast your arrow is, you have to be within 3 to 5 yards of guessing the distance or you will miss.

Stump shooting is one of the best ways to practice estimating yardage. It’s even more fun when you can stump shoot with friends. For the uninitiated, here’s how it works:

If you’re shooting with someone else, take a walk and take turns pointing out a target.  Each person shoots (without sharing what they think the yardage to the stump/target is). After everyone is done shooting, tell everyone your exact guessed yardage to the intended target (you want to be within +/- 1 yard error.)  Then, have someone stay at the shooting position while the other person walks with the tape measure to the stump/target. (Note: A range finder would definitely make this easier.)

If anyone guesses the wrong yardage by more than 1 yard +/-, they have to shoot it again (with the known yardage in mind). Now, if you are the one who has to shoot again, pay attention to how many small details you can see of every target at different distances. As you reshoot, repeat the distance in your mind and remember what the surroundings look like at that distance. When you’re done, walk to the target to get your arrow, and pace out the distance (count how many normal steps it takes for you to get to the target). You will learn distances from re-shooting and counting out the paces over brush, branches and uneven terrain, noting how many of your own steps there are per yard. If you are shooting at 3D tournaments and guess yardages without confirming what the correct distance is, you are doing yourself more harm than good.

When shooting at animals, trying to judge the size of the animal can be difficult, as animals come in different shapes and sizes. When you look for details, rather than size, you eliminate the problem of trying to judge by size differences. 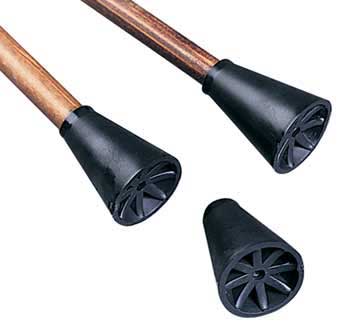 Another difficulty is added when lighting is a factor. Shade, shadows, low light conditions, fog, rain, and sometimes open fields can cause you to misjudge distance. Often times, we underestimate yardages in bright sunlight and open areas. Ultimately, the method you use depends on the individual, since we all see things differently; each person has to develop their own method of sizing up distances. No one method works best for everyone, but picking out how much detail you can see at each distance works best for many people, as there are subtle changes in detail at different distances.

The idea is to be as accurate as possible, within 1 yard. When you are right 9 of 10 times, you have mastered the art of judging distance. Becoming a skilled shooter and master of range estimation leads to becoming two more things: A deadly accurate bowhunter and a precise target shooter with an extra edge over the competition.