Eddie finished his trip west the way he hoped with a nice bull and some great memories.

Fall is a very special time to be out in the mountains. The cool mornings and warm afternoons bring with them a change in color within the trees and a smell in the air that is unforgettable. I love this time of year. Bull elk singing in the high mountain meadows is better than any concert I have ever attended. The friendships built around the campfire coupled with the stories from the day’s events build memories that last a lifetime. Luther and Eddie are two of these friends.

In 2009 Luther and Eddie made their way from Tennessee to Idaho with grand excitement and anticipation of laying claim to an Idaho bull elk. From the day they arrived in camp I could tell that this was going to be a great experience filled with laughter. Eddie has a sense of humor and a way of telling stories that will leave your eyes filled with tears and a pain in your side. He is an avid outdoorsman with a passion and determination to do whatever it takes to get the job done. After getting the two of them settled into camp and a quick check on their equipment it was time to focus on the task at hand and get a game plan together for the following morning.

The first morning found four of us heading to a high mountain meadow with the plan to split up and work the outer edges of the meadow and meet up on the far side. Eddie and I headed to the South edge of the meadow as Luther and Lance worked the North side. As darkness gave way to the first glow of a new day I let out a bugle and had a response right away. I checked the wind and told Eddie to work up to the edge of the ridge that separated us from the bull that had bugled back at us. Not much happened on this set up other than an occasional response from the bull working his way to his bedding area on the other side of the draw. I grabbed Eddie and we continued working around the side of the meadow. We found plenty of elk sign but nothing was answering back as the morning wore on. About half around we found a clue as to why we weren’t getting much of a response. Fresh wolf tracks.

That evening Rockie and I took Eddie to some avalanche shoots where we had been getting into several bulls and Rockie had put a bull on the ground a few days earlier. Eddie looked up at the avalanche shoots and then back at us as if we were about to embark on a journey that would make him regret coming out to hunt elk with us. Once we told him we had no intention of hiking up to the top he was relieved and the sense of humor returned once again.

As we worked up the dry creek bed we stopped to check the wind. As soon as Rockie let out a big puff of powder from the wind checker it was easy to see which way the wind was blowing. Right into Eddies eyes and mouth. Once the laughter calmed down I realized I had forgotten to turn on the shotgun microphone on the camera. We had to do it all again. This time Eddie was ready for what was coming his way.

The dry creek bed was full of rubs on the edges. The farther we worked up the side of the hill the more rubs and sign we found. We made it up to a bench on one of the finger ridges that came off the avalanche shoots and decided this would be a great place to set up for the evening hunt. We had plenty of bugles back at us that evening but darkness came before any of the bulls. 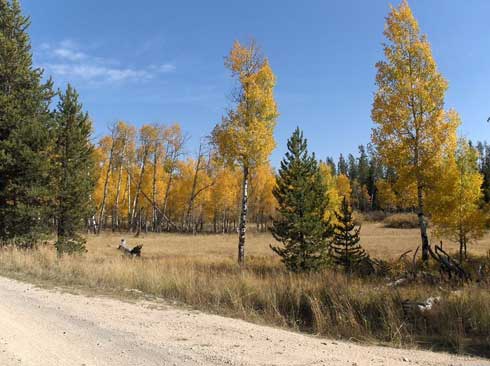 The next few days were filled with more practical jokes, stories, laughter and plenty of bulls bulging but no shot opportunities. With only two more days in camp I knew it was time to try some tactics we hadn’t thrown out there yet. Eddie and I headed out from camp on the forth evening with the plan to go after a bull we had encountered a few times but he managed to give us the slip every time. The plan was to sit atop a little hill and bugle until he bugled back. Once the bull responded I would stay there while Eddie slipped in for a shot. While sitting on top of the hill we talked how we would communicate once we were apart. Turkey sounds seemed the most logical as Eddie has spent a lot of time calling turkeys and felt comfortable making those sounds on a reed. He would yelp to let me know he was heading my way, or cut if he had taken a shot. This was a simple plan. Or so we thought.

We had been working our way thru the pines bugling every few minutes wondering if the bull was going to respond. The light was fading and I was starting to wonder if this was going to come down to the last hour of the last day for Eddie to get a chance at his dream when a bugle comes back at us. I grabbed Eddie by the pack and launched in that general direction and told him to go and go fast. He looked at me with wide eyes and the only response he could muster was “Do which?” 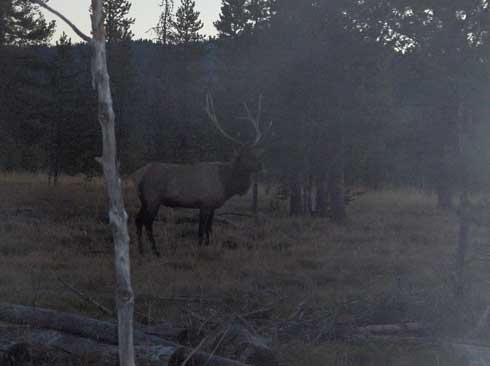 As Eddie took off after the bull, I continued to bugle and do all that I could to keep that bull talking to me. The woods became calm and quiet. I walked toward where I had last seen Eddie and bugled. Yelp, Yelp, Yelp was the response I heard so I turned around and headed back to the trail to wait for him. As darkness continued to close it grasp on my surroundings I was surprised that Eddie had not made it back to me yet so I bugled thinking he needed some direction on what way to go. I didn’t hear anything so I headed down the trail to the start of an old skid road that headed in Eddie’s direction. I bugled again but this time I heard a faint turkey sound. I walked down the skid road toward the sounds. After about 100 yards I bugled once again. The response that came back jolted me back into reality. He hadn’t been yelping at me, Eddie had been cutting. He had managed to get a shot.

I ran down the skid road with the sound of the cutting getting louder and louder. I found Eddie. He was shaking and excited. Eddie told me that he slipped in on two bulls and a cow running around him in the trees but the light was fading fast. As one of the bulls stepped into a little opening he cow called to stop the bull and released the arrow. The familiar sound of an arrow hitting its mark let him know he had connected. Eddie asked if I had a flash light on me. I didn’t. We had left our packs back at the bikes so that we could travel light. I told him to stay there and I would run and get our packs and come back with one of the bikes. I covered ground in no time as the excitement had the adrenaline pumping at an increased rate. I parked the bike on the skid road and took off thru the trees back to Eddie. When I got there he had an uneasy look on his face and I asked him if he were alright. He asked me if I knew what it was like to sit in the dark near a dead elk in the middle of grizzly bear country. I had no answer for that question other than laughter.

With flashlights in hand we recreated the scenario as he explained it to me. I found tracks of the bull taking off so I had him come join me and start tracking the bull. It only took about 10 minutes and 50 yards to find the bull piled up. Eddie had his first bull elk. It was a rag horn but none the less a trophy. After several high fives and a few pictures Eddie told me he had something special to share with me and opened up his pack. He pulled out a flask that was given to him by Waylon Jennings to celebrate this moment. He handed the flask to me and I looked at the front of it. It was Waylon’s initials built onto the front of the flask. This truly was a special moment.

I got out my knives and started to work on quartering the bull with Eddie holding the flashlight. Simple task for him right? Not so much. He was on cloud nine and there were a few bulls around us that would bugle. Every time one would bugle he would point the flashlight and start walking in that direction asking me if I had heard that. I was knelt down cutting with a sharp knife. Um Eddie, can you please keep the light pointing where I am working so that I can keep all my fingers?

Once the work was done it was time to pack the quarters to the bike and get back to camp. The moonlight had faded and we were in complete darkness. We grabbed the first load and off we went. I understand that the shortest distance between two points is a straight line but in the dark that is not always what happens. We made it to the bike and headed back in after the other half but couldn’t find it in the pitch black of night, so we decided to come back in the morning for them.

I am glad that it was too dark and there wasn’t anyone around to witness us riding together on a fat cat to go get the other bike. I am sure that we looked like two of the three stooges. Good news is that we managed to get to the other bike, load up the meat that we did have and made it back to camp safely. Everyone was sleeping in the trailer when we got back to camp at 3:30 in the morning. After waking up Eastern Idaho to tell the story along with all that happened we were exhausted and needed to get some sleep. We knew we had another tip in after the second half of the bull. Eddie was worried about bears getting into it and there would be nothing left. I had left my pack and a shirt sitting right there with the quarters so the smell of humans would keep the bears away long enough for us to get them out.

The hike in after the remaining meat was so much easier in daylight. When we made it to the quarters, I went over to where he had taken the shot from and understood why Eddie was proud about making a 47 yard shot thru an opening in the trees with fading light. I was happy for him and felt privileged that I was able to be a part of this. Eddie and Luther come out to hunt elk with us every year and the story of us riding on the bike together continues to get the laughter started that ends with tears in the eyes and a pain in the side. Eddie and I both knew that even though we couldn’t see anyone else around us in the darkness, Waylon was there.