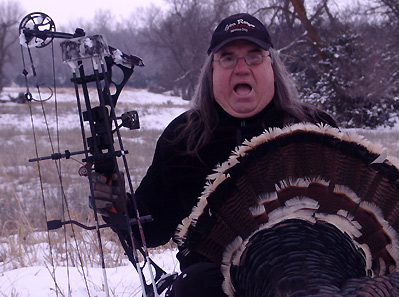 Daylight changed the snow around us from gray to white. The temperature was still well below freezing. We waited quite a while before we saw the first, lone wild turkey.  A jake. 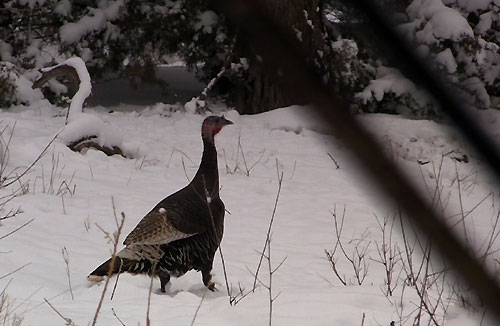 Later on I saw a bigger gobbler coming towards us along the fence to our left. 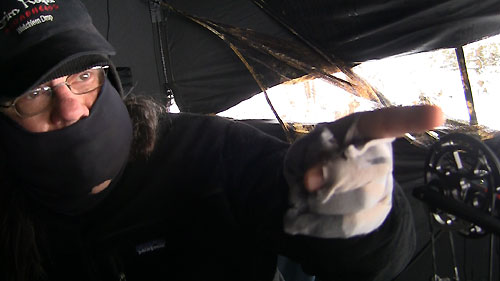 The gobbler was on our side of the fence too. I eased my fingers over to my bow, which was standing at the ready due to the new bow-bi-pod the BowStix. I was ready in case I got a shot. 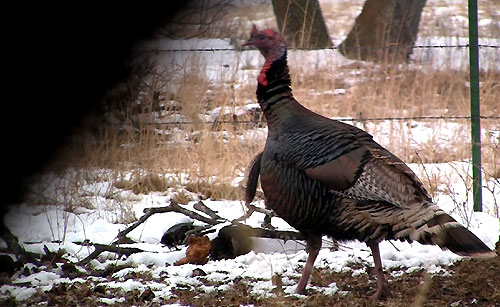 Wooo, look at this! Another gobbler came up from behind the blind. I shifted may attention to it. 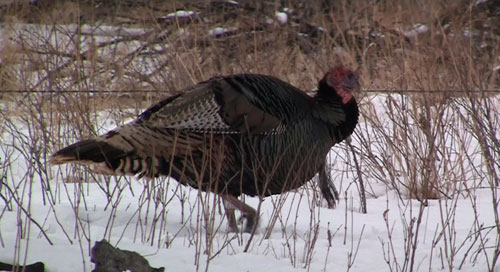 Oh no, a group of, until now, unseen wild turkeys walked around the left side of the blind. Yikes. I lost sight of the two gobblers. 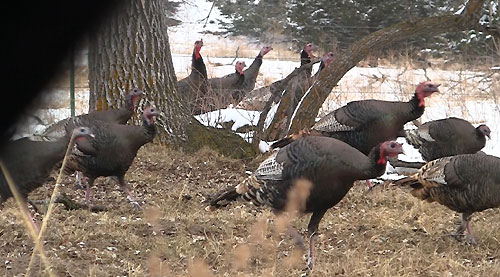 It was all slipping away as turkeys continued to pass by the blind. And then, bingo, a longbeard came in from the left. It was between the group of turkeys and the blind. And this one was walking fast. 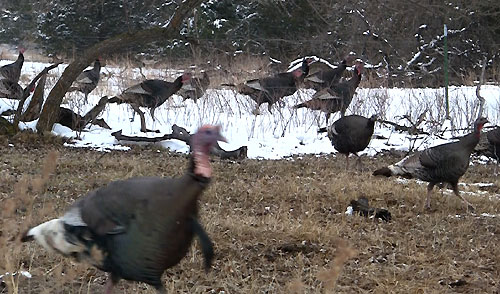 Luckly the gobbler stopped when he was in the middle shooting window. He was close, as in 5 or 6  yards close.

Normally I ease the bow back slowly but not this time. I  pulled my Alpine into the stops, put my top pin on its vitals … and …

When I released the arrow I heard a very loud noise. I thought, “Did my bow break or did the  bowstring dis-rail”? I quickly looked at both cams. I couldn’t see anything wrong.

Collin said, He’s down. I looked around. The gobbler was going down in the shooting window to my left. It hit the dirt. 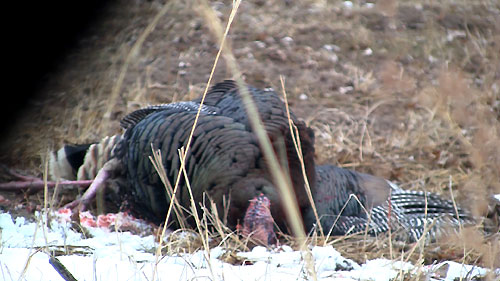 And made one more flop that turned its body around and the gobbler was still. This was my second shot of the hunt and the second time I watched ’em drop. 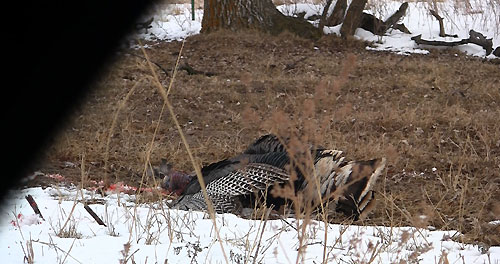 I turned my attention back to what cussed the unexpected sound. I found it. The bottom of the middle shooting hole on this blind was higher than the other two. My pin was on the gobbler but the arrow’s path was lower and cut a nice 3 blade cut through both the blind as well as the folded down window. I could stick 2 fingers through the hole.

I unzipped the blind’s door and stepped out. My arrow laid on the snow. Look at the size of the blades on this Grim Reaper Whitetail Special. 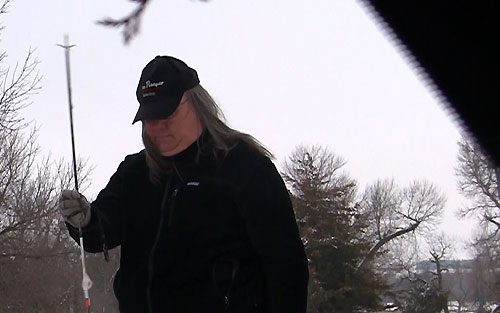 The gobbler was four steps further. 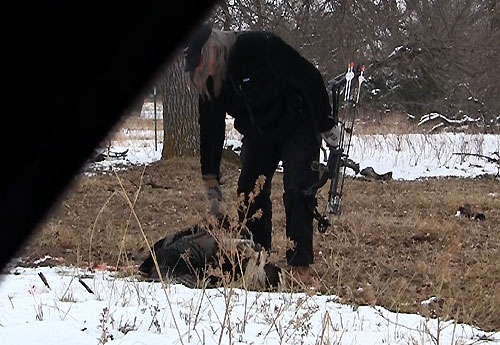 I picked him up and walked back to the blind and we did a short video talk after the fact. 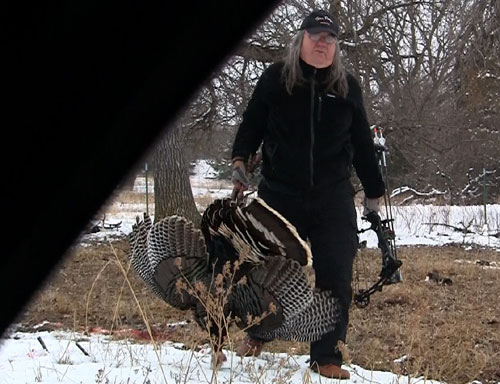 Then Collin took my picture with the gobbler. A full fanned Nebraska Merriam’s. Yahoooo. 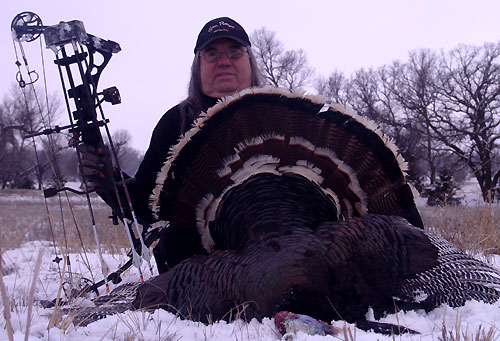 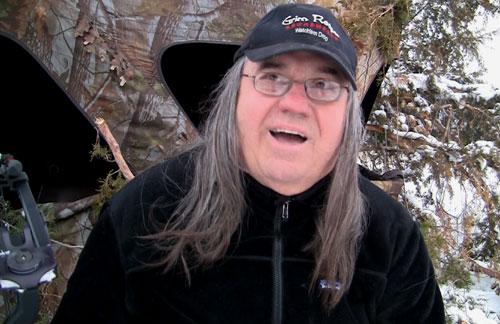 Alpine Archery F1 Fireball – A week before we left for the Florida hunt for Osceolas I received this new Alpine Archery parallel limb bow. I immediately went to to my friend Jim Mitchell’s ranch and Gene Curry set the bow up. So it was all that it could be.

When Gene was finished the F1 Fireball was quieter shooting than any bow I’ve ever owned. Quiet is important hunting gobblers. A smooth draw is important too and this bow is extremely smooth and comfortable to draw. The bow’s rosewood grip fits perfectly. Speed is a good thing too and the Fireball is rated at 337 FPS. My turkey setup this year is only 58 pounds but the F1 Fireball still has plenty of speed — the arrows rocket out of the bow.

So when I took my shot the bow drove the arrow through two layers of the vinal blind (which were thicker than my normal blind and also were frozen like a board.) And then it took the gobbler out too. This bow has lots of power, even at 58 pounds.

WannabOutdoors Bowstix – Until the BowStix there was no convenient way to keep your bow ready to shoot in a ground blind. It screws it into the bows stabilizer hole and has bi-pod legs that support the bow upright in shooting position. I nocked an arrow and stood the bow up with the BowStix.  Later when a shot opportunity came I reached for the bow. All I had to do was draw it. Nice.

I fletched my own arrows with the Arizona EZ Mini Fletch. It does 3 feathers at a time and is easy and fast to use. The vanes were white Bohning Blazers and I use the super fast drying Goat Tuff glue.

On The Bow – Gene Curry installed a string loop and a Whisper-Peep on my bowstring. My bow quiver is the Alpine Soft Loc 5 arrow model. It is quiet and can easily be removed from the bow (for hunters who want to do that). The arrow rest is theAlpine Whisperflite fall away rest. This rest is built for speed bows, meaning it gets out of the way faster than most of the drop aways. I’ve used this rest for 4 years and it is excellent. The bow sight is the Cobra Archery BoomSlang. I got the one with the largest pins available, those tiny pins are difficult for me to see inside a dark ground blind. I also had Nikon Binoculars and Rangefinder.