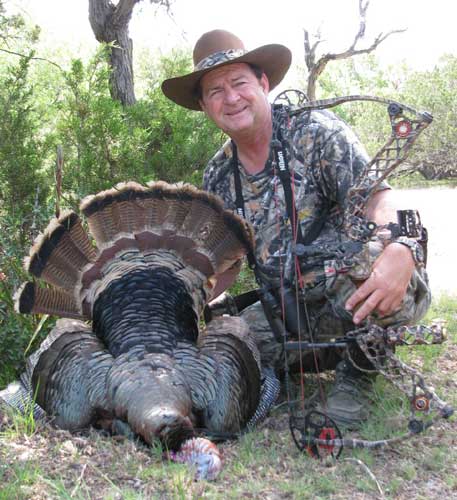 Author with his late season turkey.

I can not believe the number of times I have someone state, “It’s too late to go hunt gobblers”! The primary reason is they think it’s just too late in the season. Well, I love you folks and here is the reason for that statement.

90% of those Turkey hunters have had it easy early in the season with hot gobblers coming to some of the worst callers I have ever heard! Then as the season progresses the two year gobblers are dead or call shy and the jakes know they had better stay quite because they have had their butts kicked by older gobblers for getting too close to a hot hen. Then there is that 50 per cent who have died from lead poisoning. Believe me when, Pedro, Pete, Juan, and John are dying and Jamie has stray lead pellets where he does not like them, these jakes know to shut up and wise up.

Here we are, it’s the last two weeks of the season and you ask yourself how do I kill a gobbler when they have been chased, shot at and missed, called in and spooked? Some folks resort to ambush by watching how gobblers fly down off of the roost and watching their patterns how they travel each morning. You can do this but you had better be very careful with your calling and leave your decoys at home. Those weary gobblers know that plastic hen in front of you is not moving right and they will be running before you can get your bow or gun up.

Here we go! And I’m not talking about some beer commercial, although you will be driven to drinking that wonderful elixir that is ice cold after a hunt. I try my darndest to locate a roosted bird and then after dark on that same evening move in and set my blind up within 150 yards of the roosted gobbler. I set up about 10 yards inside the thickest and nastiest cover I can find along the edge of a field. Then about an hour before daylight I will move into the blind with my equipment and cameraman. Never turning on a light of any kind is the secret here in addition to stealth, no noise no lights.

Then when we have settled down I wait till I hear that gobbler, gobble. When I do I will use a tree yelp two or three yelps and that is it, even if that gobbler steps on your call DO NOT answer him. You want to make sure that you leave that gobbler wanting you to call back –  DON’T.  You will want him to get hot and mad because that hen he thinks that is close is not answering him. I know how tough this is going to be on 85 % of you 90% who love to call that gobbler to you. You’re going to call but not in your typical fashion.

Just when it starts to break light that bird will either fly down or will be close to flying down. No matter how many times that bird gobbles don’t make a sound. You want to make him come looking for you. I’m telling you 50 % of the time he is going to walk down the edge of the field looking for that hen that would not talk to him. When he walks by you had better be ready because, most likely, he will stop right on the money where he knows she is suppose to be, gobble one time and then walk on. You will have one and one shot only.

If for some reason he does not come in your direction by the watch and I do mean by the watch, do a fly down cackle and then a lost call or just a lost call which is a series of yelps that starts out low and then build in crescendo for 15 to 17 yelps. Then stop calling. Do not call again no matter how many times that bird gobbles at you. Remember folks you are reversing Mother Nature! In the real turkey world the hot hen will always go to a gobbling gobbler. You’re now making that gobbler come to you and you have to be coy and you do that by being non aggressive.

Last spring, it was the last week of turkey season in the South Zone and we were hunting near Junction, Texas and these gobblers had been pounded! I knew that if I was going to fill my tag I had to quietly go in, set up and be very smart about calling. We arrived way before daylight and went to a blind that was set up near a feeder. I know everyone of you are thinking yeah, yeah, yeah you’re preaching to me about sitting up on smart, wary late season gobblers and you go to a feeder! Well yes and no, we set up near the feeder because those gobblers were as scared of that feeder as they were of over calling.

We set up within 50 yards of the feeder and at daylight we had gobbling in every direction. I started as I had stated earlier and used strictly a tree yelp and then shut up.

Nothing and I mean nothing came to the call or feeder. I then started the ole time and true calling sequence of every 15 minutes of using a very boring basic 3 to 5 yelps and that was it. For the first hour I used my three reed diaphragm of the basic 3 to 5 yelps. Then the second hour I switched to my slate call and did the same thing over and over every 15 minutes of a basic yelp and that was it. This is boring business but I was not over calling the area and using the basic series of yelps. Finally around 10:30 I was using my ole magic box call with a very raspy yelp and I heard a tom give an assembly pert! I immediately gave the assembly pert back and gobbled back. I still could not see him but I knew he was close.

I did not do anything again just sat and watched and then finally using my binoculars I spotted the red head bobbing thru the brush. He walked out and was very wary as he walked around looking for the hen he had heard.

I knew it was now or never and with the camera rolling, I drew my Z-7 back and picked a spot right above the thigh and turned loose the wicked Carbon Express. The impact knocked the bird off of his feet. He righted himself and tried to get airborne. First I thought this was a futile exercise. There was no way that turkey was going to get up and get airborne. Well guess what? He not only got airborne but took off flying about 6 feet off of the ground for about 30 yards when he went up and over a 20 foot high Cedar tree.

Well after much back slapping and doing all of our cut a ways we went out to find my arrow and see what type of damage was done? There was a wad of feathers everywhere and blood all over the ground. I started to follow the blood trial just like I was following a lung shot Whitetail buck! Blood everywhere and I followed the blood to the 20 foot Cedar tree and picked it up again on the other side. With my cameraman filming behind me we followed it right up to the dead gobbler. What a thrill it was to find my bird laying dead after what must have been over a 100 yards to his last landing spot.

The main thing about bow hunting for turkey is to never give up. You can take gobblers all during the spring season but you just have to make adjustments and change what you normally do. Early season is one thing, mid season is another but late season gobblers are the sweetest trophy you can take with a bow. Don’t forget to never over call in late season.