Getting My Record Gobbler 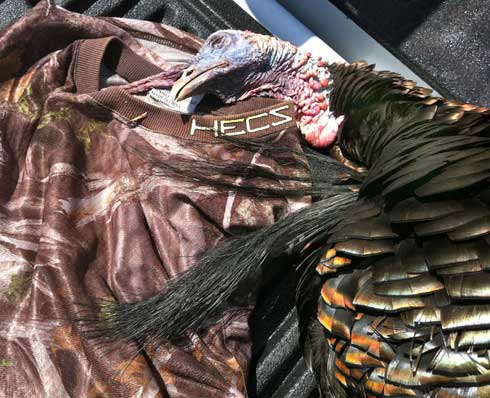 Getting My Record Gobbler – On the Ground – WALKING!

This years turkey hunt for Rio’s began  just north of San Antonio, Texas where I was fortunate to harvest  a very nice bird with good friend on their lease. The following week had us closer to home where I would take another friend and his wife to try and get her first bird.

We all got situated in our blind and before long had a big gobbler come in close. Unfortunately he never came in close enough for her to take a shot. I must say though he put on one heck of a show strutting around, fanned out and bossing the field, but offered her no shot. He stayed just out of range and would not close the distance close enough for her 20 gauge. It was fun and it was certainly exciting but also frustrating to say the least. While we didn’t score her a bird I had planned to come back three days later to bowhunt and I had my sights set on that same reluctant bird. That started one of the most fantastic turkey hunts I’ve ever been on.

And so three days later I was back at this same location ready to try and get that big gobbler in close enough for me to take a shot with my bow. I knew from past hunts that the only way to my blind was to walk under a roost so this morning (April 27) I left home at 3:30 am so I could be there before they were awake. I hesitated going that morning because of the high temperatures of about 85 degrees coupled with unusually high winds that were predicted for the day.

I said ‘hesitated’ though as I knew there was no way I was not going to be in the woods that morning. Time was running out before the season would close and I wanted another chance just in case this day did not work out and I missed my opportunity of getting a successful shot off at that bruiser tom.

I arrived at the blind in plenty of time and more importantly, undetected by birds that were roosted 75 yards from my set up. I put two hen decoys out, settled in and waited for daylight.

The first to gobble were several Jake’s that were roosted on the property line. Things started to heat up when the old boss gobbler sounded off about 200 yards away. Then I watched as two hens and two jakes pitched down and walked up to within 5 yards of the blind before heading off in the direction of the old tom. I had plenty of gobbling all around me but nothing I wanted offered a shot.

At 7:30 I saw the big tom strutting his stuff in the field with a hen and called to her. She started cutting and I noticed she was headed straight to me with the tom following close behind her. I put the release on the string and just knew this was it. The hen was coming and she was bringing the big guy right to me so I could fill my bird tag. As is usually the case when hunting however, the game seldom sticks to the plan and cooperates. To my surprise he came in to about 45 yards and suddenly decided to veer off giving me no opportunity for a clean shot. Who knows what his small mind conjured up to distract him from the impaling I was hoping to provide him.

When 10 am came I decided to leave all my gear in the blind, get my truck and drive it down so I could load it up. I hated to leave knowing gobblers were still in the area so I thought I would give it a shot and walk to the truck through the area where I had heard some mid-morning gobbling. I thought I might get lucky so I was traveling light bringing only my bow, quiver and mouth call. I was wearing a new HECS suit so I figured this would be a hands-on, proof positive test to its effectiveness, hunting turkey on the ground, walking.

Thing is, I had witnessed some incredible turkey hunting action 2 weeks prior with good friends Mike Slinkard President of HECS and the land owner Brad Gohlke getting away with all types of movement. Not only were they not in a blind, but one was actually filming the hunt  with birds up close. I mean a flock of jakes so close they could have spit and hit one. So I thought if they could pull that off, I would try too. Why not, I wasn’t having a lot of luck in the blind and there was tomorrow if I scared every gobbler within 2 miles. So off I went.  (For this remarkable video: Click Here)

It wasn’t exactly the best set up for stalking anything but I headed out walking right into the wind. I hadn’t gone more than 30 yards when I heard a gobble between me and my truck. This was going to be real interesting I thought so I carefully walked approximately another 50 yards and heard him again. I couldn’t see him but with a turkey’s super eye sight I knew he was going to bust me any second.

I was walking on a old dirt road and after closing more of the distance between us I decided I was close enough to the bird and had better get ready just in case. I looked around for a dark area to stand and found one about 15 yards off the road. I concentrated on the direction I had last heard the bird and yelped one time with the mouth call. He immediately answered me back. He was about 50 yards out and moving toward me. I nocked my Rage tipped arrow and waited for him to show.

The excitement was palatable but I figured I had nothing to lose. I concentrated on not moving, slowed my breathing and decided not to try another call. I didn’t want to take a chance and give away my location.  I knew he was getting close. I looked for movement, a glimmer of a feather, a color, anything at all that said turkey and within a minute I saw the boss gobbler walking up the road. I had never been this close to a wary turkey outside of a blind and the adrenalin was in overdrive. I calmed myself as best I could and drew the bow. I fully expecting him to catch movement and explode to anywhere other than where he was. It was like he had no clue what I was, giving me the opportunity to aim and release.

The arrow streaked unseen the 17 yards to the bird. The impact hit in the wing, he spun around instantly at the shot and it was over just that quick. I still couldn’t believe I had gotten him in that close without him knowing it.

I called my good friend and land owner Brad Gohlke to share the good news. I then had the chance to take a good look at my new trophy. The hit was perfect and the bird was finished quickly. I noticed he had not one but 4 beards we later measured out as totaling 37.25” with the longest being 11 5/8”. He weighed 21.56 lbs with 1 ¼” spurs. I scored him on the NWTF website and came up with an unofficial total score of 120.8125 putting him in the top three bow kill birds in Texas.

[/caption]I have to admit when I first heard and read about HECS – Human Energy Concealment Systems I was a bit skeptical. Yeah I knew about electromagnetic fields and all that but honestly, it just sounded like another gimmick. Well I’m here to tell you, HECS works. There is no doubt in my mind that had I not been wearing HECS that bird would have never come that close to me, standing at the side of the road and let me not only be there but draw my bow and get off a shot. I’ve hunted turkey out of blinds since 1992 and I would have never believed it possible to be out of a blind and get this close to a gobbler. I will never, ever go into the woods hunting again without my HECS on. I can’t wait for whitetail season.