by Tony Pannkuk
in Bowhunting Posts
0 0
A A
1 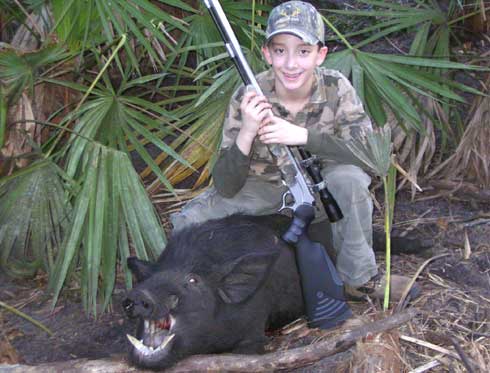 The tropical images of wild boars running through palmetto bushes triggered my sense of imagination. I have hunted wild boars in Georgia and California on several occasions but this would be my first hunt in the sunny state of Florida. I brought my 9-year old son Michal with me during spring break from school. This will be his second boar hunt. The year prior, in the state of Georgia, he took a nice wild hog while we were hunting on the Hickory Hollow Hunting Plantation. He took the boar using a GT Flex crossbow from TenPoint. The GT Flex is a new model from TenPoint and Michal was the first person to take an animal using it. This was a challenging feat in a demanding habitat for any hunter, but for a 9 year-old it was such a great accomplishment. On this current hunt, he used a Thompson/Center muzzleloader in 50-caliber while I used the DeadZone 30 from LimbSaver.

I attended the Safari Club Convention in Reno and on the first day spent most of the time just perusing the displays, booths, auctions and outfitters. Making a mental note to which I would need to spend some time with and wanting to make sure that I had the opportunity to speak with Craig Bottington and Terry Weiland, both writers for Safari Club International. Over the years, I have read many articles by these two great hunters and writers.

While walking the aisles, one of the outfitters drew my interest. He offered a wild boar hunt in Florida and I could take my 9-year-old son with me to hunt. The accommodations and meals were inclusive in the hunt. I went back to the booth several times in the next two days. Collecting the information that would help me make the decision. The booth was Hog Heaven Ranch. Owners are Bob and Diana Joyner. They both assured me that my son, Michal and I would get our wild boars. Hog Heaven Ranch is located northeast of Ft. Meyers in Florida.

Wild boars are nonnative to the United States and can be hunted every day of the year. This provides a great opportunity for off season hunting. Wild boars inhabit all southern states and are well up into northern California. If not continually hunted it would only be a matter of time before they entered all of the lower 48 states.

In Florida, the weather was great for our hunt. During the day it would warm up into the 80’s and at night it would cool down to a comfortable 65 degrees. We arrived at Ft. Meyers early Tuesday morning. Mitch, one of the guides, picked us up at the airport and we headed for the Hog Heaven Ranch. He said they have been seeing a good number of hogs and have caught several hogs during the week using a live trap.

After unpacking at the lodge and changing into our hunting attire, we climbed into our awaiting chariot. It appeared to be truck frame and motor with oversized tires that had a platform welded two feet above it. The platform had seats with seatbelts in place and a low rail around the total edge of the buggy. All the controls came up through the platform including the steering wheel. This put us up 6 to 7 feet above the ground. Mitch said it was for two reasons, first, we could navigate the wet ground if we where to encounter water and the second was of most important, it was to keep us up away for any charging wild boars.

There were three options of hunting. Use an elevated ground blind and catch a hog passing through. We could also drive around on the machine and hunt from our seats. Or we could spot-n-stalk, which is always my first choice of hunting.

On Michal’s hunt, we chose to climb into a blind and wait for a hog to pass by. It was in the evening and didn’t take long before we started seeing hogs. Behind the blind was a large swamp, the wild boars were making their way to find something to eat for the evening. The fragrance was cloying with the scent of palmetto bushes mixed with the mud of the swamp. We could see them cautiously and slowly working their way through the overabundance of palmetto bushes as they looked for any food source. The landscape of flora was painted in subtle shades of green, yellow and brown.

The muzzleloader that Michal would be using is mounted with a Leupold scope. I down-loaded the charge to 80 grains of Hodgdon triple 7 powder to keep the recoil as soft as possible, but will still have enough power to take down a boar. I also put a SIMS recoil pad on the stock to help absorb the recoil.

It wasn’t long before we spotted a nice hog that had tusks that would measure over 2 inches. I filmed for awhile while Mitch made sure this was a nice trophy. I looked at Michal and his big eyes seemed to get bigger. The anticipation was growing in him like a water buffalo fording a flooded river.

Mitch said it was a nice trophy and go ahead and take it. I took out my Leupold range finder and ranged it at 64 yards, then whispered to Michal the distance. As Michal found the boar in his scope we waited for the shot. The silence of the jungle was rattled with 80 grains of triple 7 pellets igniting sending a 325 grain Hornady slug on its way. Through the thick smoke of the muzzleloaders blast I could see the hog running to our left.

After waiting for the imperative 30 minutes, we slowly climbed down from our fort. Finding the trail of blood from the boar, we slowly and cautiously worked our way through the ever so thick and precarious palmetto bushes. We would need to be extra careful in the tracking. We did not want a wild and wounded boar charging us providing more excitement than we could handle.

Following a very nice blood trail, we would need to pay close attention in front and on both sides of us. A couple of times the wounded hog would run through a thick patch of palmetto bushes, to prevent any unforeseen risks we would walk around the palmetto hoping to find the trail on the other side. In one case there was no trail of blood to be found anywhere after the boar entered the thick bush.

Michal would stay back with Mitch while I went into the maze looking for any sign of the hog. After entering the sharp edged bush, I could see the wild hog lying another ten feet in front of me under an old stump. After watching for a couple of minutes for any movement I signaled for Mitch to bring Michal up and we would go in together. Approaching the boar, Michal poked it with the muzzleloader, the hunt was over as we could see no movement or breathing. This was an exceptional hunt for a 9-year-old using the traditional method of hunting like our forefathers had used.