Nebraska is my second stop this spring on Bowhunting.net’s  Wild Turkey Grand Slam quest. Good friends Robert Hoague and Collin Cottrell picked me up at the Lincoln, NE airport.  We all shot our Florida birds the first weekend of that states spring season. We were now focused on Merriam’s wild turkey.

Years ago, good friend and fellow Tinley Park Archery Club member, Terry Marcukaitis, left Illinois and headed for Nebraska. Terry retired from UPS and always wanted to retire in an area he visited and hunted in north central Nebraska. He put down retirement roots with wife Edna on a small (by Nebraska standards) 400 acre ranch and started his new career of farming and raising beef cattle.

It was always a treat when Terry returned to visit family in Illinois and would stop by my archery shop Freddie Bear Sports and tell me of events from the previous hunting season. Terry always boosted about the number of wild turkeys on his ranch, both Merriam’s and Easterns. He invited me out each spring season. I finally took him up on his offer several years ago. Robert  and I wanted to try for a grand slam. I informed Robert I had a friend who would let us hunt Merriam’s. It has been an annual hunt ever since.  This year Collin joined us.

Last spring I bow killed three wild turkeys on the Marcukaitis ranch, two of the birds were in Terry’s  3 acre food plot on the East side of his ranch. Terry has deer stands on the far east edge of the field. It was time to plant the field in corn and Terry plowed and disked the field in early morning. That afternoon I glassed the field and it was loaded with wild turkeys. I moved my blind to the edge of the field, put out my decoys and in 2 days had the two birds down.

Late last fall Terry picked alternating 8 rows of the corn. The rest was left  for the deer and wild turkeys. There wasn’t much corn on the stalks this spring but the turkeys kept visiting the field looking for missed kernels. Terry suggested I put my blind in the same spot as the year before. I sent out a blind and Terry put it up for me a few days before season.

Opening morning I headed for the field. I put out two decoys 15 yards in front of my  blind. At day break I heard hen calls not far to my left. I opened a window and saw about 30 birds skylighted in the big cottonwood tree on the next field over.

Gobbling sounded from several Toms. More gobbles came from the river bottom to the east. What a glorious opening morning in the turkey woods!

It was still rather dark when the turkeys started their fly down. One, then two, then several birds flew until the tree was empty. I couldn’t see them land but in a few minuets I could hear the socializing as the birds revved up their turkey talk in the hay field a few hundred yards away. It is late March. The weather is cold and the turkeys were still bunched in their winter flock. As the spring warms up, the turkeys disperse and fill the hills and valleys in every direction from the ranch. But this morning they were together and not that far away.

I made a few calls and did have gobblers respond. My calls were also answered by the many hens with the gobblers. I figured my best strategy was to wait them out and let them come to the corn field and hope my decoys would lure them in range. 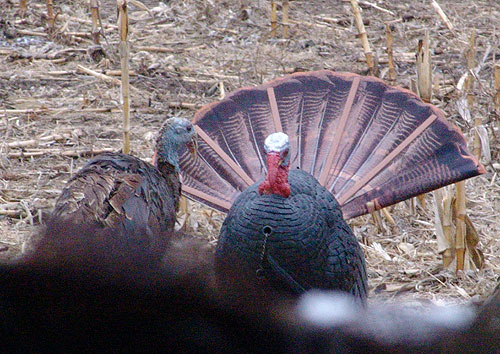 An hour passed and I spotted turkeys at the far edge of the field heading my way. It was a group of 6 hens. They scratched and pecked their way to the middle of the field. Several more hens entered from the same place as the first bunch and headed my way. I pulled out my camera and took pictures. 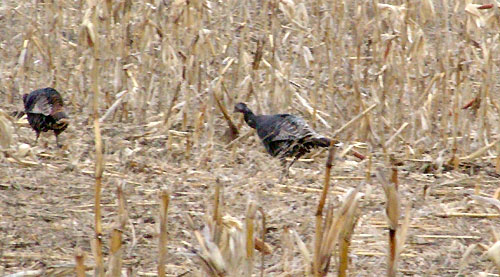 More birds. These birds looked bigger. I pulled out my binoculars. It was 6 toms. They were all long beards. The excitement level just jumped several notches.

I always carry a rangefinder but up to this point it was still in my pack. I scrambled through my back pack and retrieved my Leupold. I ranged several stalks of corn that made up the rows in front of me. The gobblers were in the picked 8 rows that led from the far end of the field to my blind. I made some loud yelps and watched as all 6 gobblers stood motionless and looked my way. I had my movie camera on a bipod. I turned it on and pointed it down the open rows.

The gobblers walked in a group directly to me. They stopped 15 yards  on the far side of the decoys and looked in my direction. They studied the decoys. One by one they turned to my left and started moving into the standing stalks heading back to the hay field.

Before they all left I drew back and centered my pin on the gobbler still in the open. I let fly and heard my arrow make a loud thump as it hit the bird.  I scrambled for a second arrow as I watched the bird wobble sideways and collapse after a few steps. He fell and died in seconds. He only traveled 10 yards. 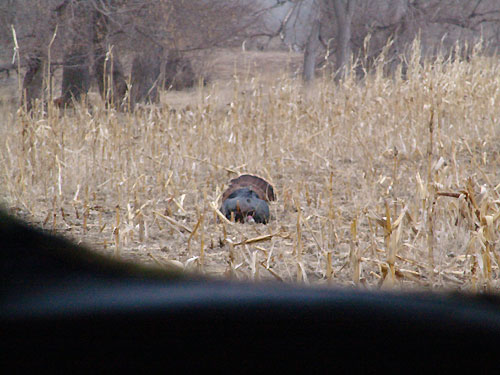 All the other birds vacated the field. The bustling field fell silent in seconds. I had two more tags to fill. As much as I wanted to put my hands on the downed gobbler I sat still hoping the birds would return.

While sitting in the blind I watched the wind blow my dead birds’ tail up. It was fanned out and I could see from his brown tail he was an Eastern.Two hours later after seeing no more birds I climbed out of the blind and walked to my bird. I checked his beard. What a nice bird. I left him there and walked back to the house. I wanted Robert and Collin to take some pictures at the sight.

We ate lunch and returned for the photo session.

What a great beginning to my 2011 Nebraska wild turkey hunt. It wasn’t the Merriam’s wild turkey I was expecting but it was an Eastern. That is good. I hunt Easterns in IL. I have a first season tag and it is only good for 5 days and I have 3 hunters to guide. With this bird in the bag I won’t have to shoot one in IL.

I’ll look more closely at the next bird before I let an arrow fly. I want that white tailed Merriam’s for my next tag.

EQUIPMENT: Fred used a F1 Fireball by Alpine Archery set at 70 pounds. It was smooth to draw and shot fast and accurate. His broadhead was the 100 grain Grim Reaper Whitetail Special with a 2-inch cut that put a huge cut in the gobbler. It went down in 10 yards, enough said.

At Bat for Turkey