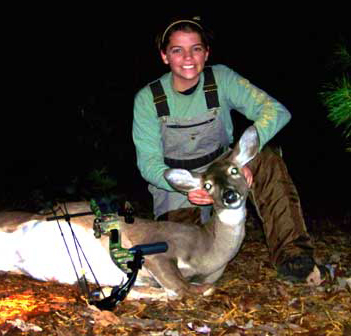 Sponsored by: Victory Archery: Every Shot Begins and Ends with Victory

My daughter’s excitement about our upcoming bowhunting trip to the mountains of North Carolina revealed her youthful exuberance for our great sport. Michaela’s success as a young deer hunter, up to this point, had been limited to that achieved with a gun. She hoped for the opportunity to experience a new definition of success, this time with bow and arrow.

So we prepared for our trip that would have us hunting several days. I loaded our bows, climbing stands, bedding, food and other essentials and we left with a third hunter, our good friend Jason. During the ride, I often wondered if my daughter would succeed at getting her first deer with bow. It was my hope that she could experience the excitement that Jason and I had when we killed our first deer with bow. Four plus hours later we arrived at our hunt camp and began the task of unloading our supplies and preparing for a good night’s rest.

The area we planned to hunt is a dominant ridge covered with Laurels. For a hunter who had been used to dealing with briar patches of the low country I just knew no ‘brush’ could be any tougher. Some years before, I found out how tough the Laurel thickets could be as I hiked down and up the mountain checking out the area. One can turn their back and push through briars but Laurels are a different story. They grab you, pull on you and poke you quite hard. But as often is the case, tough terrain equates to perfect cover for the wily whitetail.

We started our day with an early morning breakfast and then headed out into the darkness with a backpack of supplies enough to enable us to stay in our stand all day. I placed Michaela in a 20’ leaning stand at the edge of the thicket. The previous season she had seen plenty of deer from the stand but unfortunately her success ended there. On that trip she had two misses from the same stand. On the first shot at a doe her arrow hit solidly in a Laurel limb. The second miss was just the result of a bad case of nerves. As she drew back to prepare for a shot on another doe that came her way an hour or so later an errant finger inadvertently pressed her release sending an ‘alarm’ shot over the top of the doe. Needless to say, the doe was on edge after that shot. Michaela was able to draw back a second arrow only to have the doe jump the arrow and at that shot she quickly disappeared over the ridge to the next hollow.

Jason flanked the other edge of the thicket that Michaela hunted. I hiked some four hundred yards to another Laurel thicket. The hike carried me through a small hollow with a creek running through it. The morning hunt did not go well for me. All I saw was a bushel basket of grey squirrels. A text from my daughter later that morning revealed she was in the middle of a lot of deer activity. She had seen several nice young bucks and one quality buck. After communicating with Jason, it was obvious that there was much activity in the Laurel thicket. Jason also saw a quality buck, possibly the same one my daughter had seen.

Around noon I decided to relocate to a heavily traveled area about one hundred yards from Michaela. I checked my game camera as I walked to my new location. The camera had captured what appeared to be an eight point. It was my hope that someone would get a shot now that we had the area well covered. Again, for me, activity was slow. By mid afternoon I had still only encountered squirrels. Boy was there plenty off them.

Around 5:00 p.m. my cell phone vibrated. Michaela had several does coming her way. I could only hope she would get a shot. I wondered if Michaela would maintain her composure well enough this time to make a good shot if the opportunity presented itself. But as we archers know, the art of hunting with bow is much more challenging than a firearm. I could only hope that she would handle the pressure. She had spent many hours practicing in the back yard honing her archery skills and I could only hope all the practice would pay off.

Sometime after 5:00 p.m. I heard a ‘thud’ sound not realizing what had occurred. Next I heard and then saw a large doe running from the area where Michaela was hunting. The doe slowed, staggered and fell about the time my phone began to vibrate. When I saw the call was from “KK” (what my older girls called Michaela when she was younger), I realized that she had successfully taken her first deer with bow. Being close enough to witness the hunt was and still is priceless for me. This memory stirs my hunter’s heart, this father’s heart even as I write about that great hunting day. Michaela wanted to come down the stand immediately to go to her doe. I told her to calm down and that I had the doe in sight.

Now the work was about to begin. We met with Jason and carried our stands, bows and backpacks to our truck. We then proceeded to drag the big doe up the mountain. She managed to run some one hundred or so yards down a steeply sloped area. Jason and I struggled to get her up the slope. More than once we had to stop and catch our breath. Finally we made it to the truck and headed back to camp. We took some pictures of Michaela and her deer. To my pleasant surprise my game camera took a picture as we dragged the doe through the Laurel thicket. 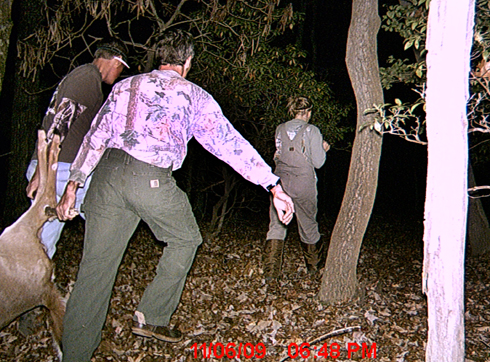 Michaela became the first of her group of young hunters to take a deer with bow. No more wondering for me. My young hunter succeeded and just like me she is hooked on bowhunting. The passion of a bowhunter is hard to explain. You just have to experience it first hand! I look forward to our next hunt and I certainly encourage every bowhunter to help your children get into the sport. Bowhunting is a family affair and it’s the future of the sport. I am so thankful my daughter is now officially, a bowhunter.