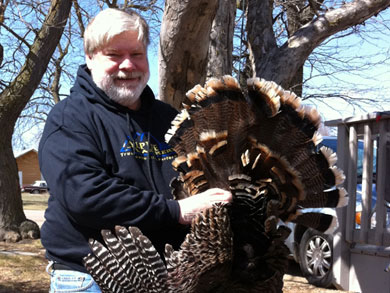 Every morning a flock of roosting wild turkeys fly out into the hay field Northeast of the ranch. From there they head in all direction. I watched most of the wild turkeys cross the pasture and head for the river bottom. I like this area. My second hunt on the farm 5 years ago, I got a double on jakes one afternoon. It was extremely windy and the birds were hunkered under the cedar trees. I called once and four jakes came running. Two arrows later, 2 birds were down. This was my new favorite area.

Terry watched the river bottom this year and pinpointed an opening in the trees. He watched birds consistently pass this spot each afternoon to return to the roost area. We took a blind to that spot and set up 20 yards from the end of the pasture fence, a sure turkey funnel. Terry brought along his chain saw and cut branches on one side of a lone cedar tree. We put the blind up against the tree and put the cut branches in front of the blind.

I used a hen decoy and put it on the side of the blind away from the fence. Turkeys will follow fence lines and use gate openings. Even though they can duck and go under three strand barb wire, they still use fence lines as navigation routes.

I settled in the blind and immediately heard hen calls in the direction of the river. That is good news. I am in between them and the roost trees. A couple hours passed. I used my mouth diaphragm every half hour. After my last call I was surprised by a hen that answered just a few yards away. She walked around the cedar tree and stood in front of my blind. Another hen followed and then another. Soon I had more hens around me than I could count.

Jakes came next, more than a dozen. 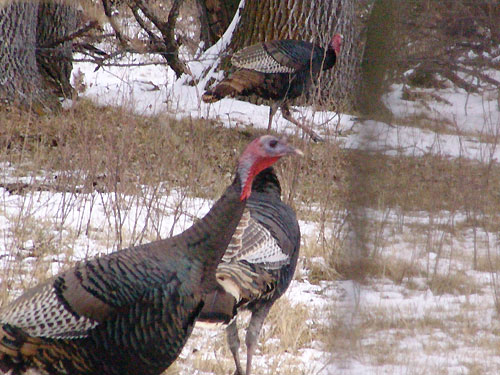 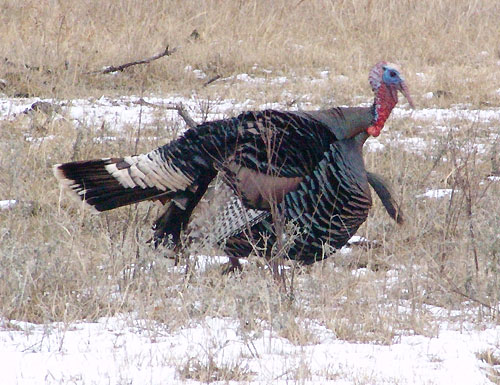 I wasn’t picky. The lead gobbler was 10 yards from my blind. He stepped into one of my shooting lanes. I came to full draw and centered my pin on on him. The arrow hit the gobbler’s spine and it dropped in its tracks. It’s wings flapped and he tried to fly but just scooted across the snow and grass. It stopped and died in 40 yards.

My video camera was facing out the far window. I moved it over to the shooting lane where my bird lay and turned it on. The other three long beards walked to my downed bird and looked and walked around him. Most of the time these birds will attack the downed bird. These birds didn’t.

I waited for all the birds to leave before exiting the blind. I walked over to my gobbler with my camera and took pictures back towards my blind. 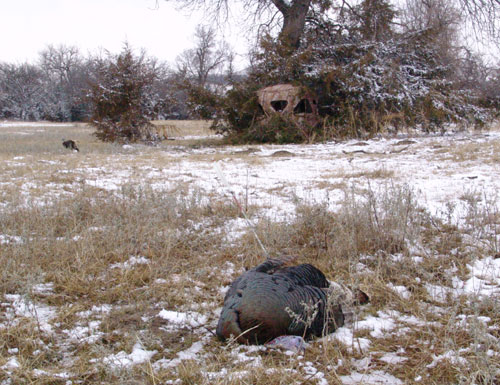 I picked it up and was delighted to see it was another Merriam’s. This one was also heavier than my first two.

What a fun week in Nebraska.

EQUIPMENT: Fred used a F1 Fireball by Alpine Archery set at 70 pounds. It was smooth to draw and shot fast and accurate. His broadhead was the 100 grain Grim Reaper Whitetail Special with a 2-inch cut that put a huge cut in the gobbler. It went down in w0 yards. That’s the way I like it cause I like to watch ’em drop.