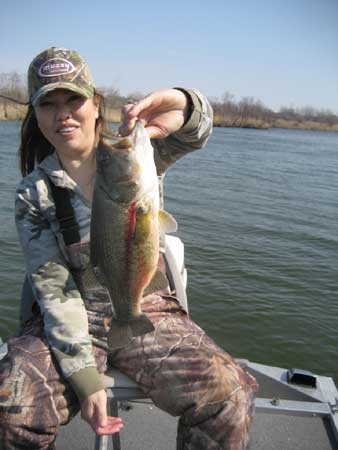 Have you ever heard big ice melting? It’s an eerie, deep and distant sound of maybe two large slabs scraping against each other. It is haunting if you are walking in the woods alone; it echoes throughout. This is just ice on a small local lake. What would this sound like somewhere in Antarctica? Some people, like environmental journalist Dan Kulpinksi, have been there to record the sound of ice melting. He writes, “What you hear is air escaping from hunks of glacier after they break off into a lagoon; air has been trapped for millions of years. It’s a kind of a dripping, clicking, popping sound reminiscent of rain falling off a roof.”

The sounds I heard weren’t dripping, it was more of a long drawn out moan, like that of a large whale. If you walk near a lake in late winter you might be able to hear some of these sounds, as they do travel far. Armed with my VANGUARD Endeavor ED binoculars.  I was doing some early season shed hunting which produced a half-chewed 4-pointed antler. I am told the best way to find more sheds is to do a grid search. Cover every square inch of the woods you are walking. I can’t do that; it would make me dizzy.

This is the first year that I really went out to look for sheds instead of just going for a walk. I became so obsessed with looking at the ground that I did not look at my surroundings. Every time my husband drove by any patch of woods, I would even look from the truck — maybe there would be one lying there, sticking out like a sore thumb. In truth, they are as easy to find as a needle in a haystack. I know some people do find a lot of them and I think that depends on how hard they look and the areas they have scouted.

This year I found two sheds; the one that had been chewed up already this early in the year was probably dropped by a buck last year and was easy to spot. It had the unmistakable textured look of an antler and it looked quite different than a tree branch. When I walked toward it, sure enough, success! The other one was found in a patch of woods behind my archery club and it was so white and so bright in the sunshine it would have been hard to miss. It was one side of a small fork-horn, but I was still happy I found something. It’s May now, and my shed hunting obsession has died down a bit. I’ve developed a new obsession, and that is to find all the bass I can get.

My first fishing excursion of 2011 was in the middle of February. Most people are still sitting at home cursing the cold weather. Hunting season is over, and fishing season doesn’t officially start for most until the cold weather breaks. My fishing buddy and I start fishing as soon as the ice breaks.

For this first trip of the year, I met him at a launch site along a local river about an hour’s drive from my house. When I got there he already had the boat in the water and all I had to do was grab my pole and daypack. The temperature was in the 20s and the water temperature was about 40 degrees but it was clear. This time of year some people are drilling a hole through ice and sitting on a bucket. We are already out on any open water we can find. And on the river we fish, the power plant keeps the water moving even in the middle of winter.

Now I’ve been fishing pretty much my whole life but when I fish with Bob there is still more to learn. In the past, my typical day of fishing consisted of placing a fat juicy worm on hook with a bobber, throwing it in the water and grabbing one of my favorite books and relaxing on a lounge chair by the shore until my pole started bouncing.

Sometimes I would get ambitious and throw a lure in the water a few times however, most of my artificial lure fishing would be off a boat. Heck, I’ve even jigged a minnow and caught some really nice stripers, walleyes and saugers in my day. Not to say that I’ve not been successful but there is a whole world of fishing that this girl didn’t know about!

We used minnows for this frigid day on the river. We were in some secret spots which I cannot describe to you, as I was more-or-less blind-folded into the area (I am to share the spots he takes me with no one, unless I find myself held hostage and the only way to get free to save my life is to tell). The 20 degree weather wasn’t bad with all my hunting clothes on but it was still much colder than I expected in a fast moving boat. The outside temperature rose to almost 40 degrees around 10:30am.

It began to rain hard. Where was my rain gear? At home where it should be in the middle of February! Well, die-hard Bob wouldn’t let me get soaked so he insisted I wear his rain coat. I refused, but he would not negotiate. I felt bad as he got soaked but it didn’t seem to bother him in the least.

We fished in a spot where the water temperature was up in the 50s, and the fish were congregating in the warmer water. Bob taught me to precision cast exactly into the middle of a pool of swirling water away from the “swirl,” so my line doesn’t get swept away by the current toward the dam.

To me, casting had always meant simply throwing the line into the water in the general area you wanted the bait to land and that was good enough. Bob set to teaching me how to cast to the exact spot I wanted the hook to land. Now I am going to tell you, I don’t take anything that seriously, and that includes fishing. In fact, I can pretty much say that I am a Jack-of-all-Trades, Master of None but if you want to catch big fish you have got to learn how to cast on a dime.

It took several tries, and Bob always encouraged me and praised me for good casts. I began getting many hits at this particular spot. Between us, that day produced some decent sized bass, a great striper, a crappie and, down-river, I caught one of the most interesting-looking garbage fish I have ever held in my hands; a colorful gar about 20-some inches had just latched onto my minnow as we were trolling away and I was getting ready to reel in.

The boat ride back was shockingly cold at 25 mph but with the clothing I had on I held my own. I love it when the guys talk about how tough I am.

On another trip with my fishing partner, we were in a bass boat, trolling gently along the shoreline. I couldn’t have been happier as I love being on the lake. The water was so pristine, the hills and trees around us were a drab brown and gray reminiscent of winter. It was another cold day of fishing because it was only the beginning of March. On this day I was taught to cast very close to the shoreline, between the tall weed beds where the “big boys” are lounging around, lazy and sluggish from the cold water but willing to nab a worm if tossed right in front of their mouths. I was also “precision-casting” into underwater structures such as the downed tree branches where bass love to hang out.

I was learning how to rubber worm fish and if learned right, was to be catching big bass just like Bob’s. After several attempts trying to get that worm in the right spot I was taught to drag him slowly along the bottom, feeling the bottom as I slowly reel in, keeping track of the tension on my line.

When I get a bite I need to sort of point the pole toward the water and set that hook and begin taking up all the slack in the line and reel that fish in. It’s not as easy as it sounds. I never did catch anything with a rubber worm, but my good friend just happened to hook into a nice 6 lb. largemouth right before my eyes, which he was so proud of and then he throws him back.

On another one of our winter fishing trips, I was using one of Bob’s favorite top-water lures which dives down but not too deep. I hooked onto a nice 3 lbs. bass, and I was just loving the way it felt when the fish chomped on the lure.

Fishing with Bob isn’t the type of relaxing outing I am accustomed to. Finding and catching big fish is a little bit of hard work. Let me rephrase that, it can be hard work. I had to take some breaks to rest my arms but I still had so much fun. This fishing, even at the end of winter, was so rewarding, because I have never caught fish like this before. I would also have never dreamed of throwing back fish if I caught them and we threw back nearly all of them. When the weather gets warmer I will be catching some even bigger fish this summer.

On one of the occasions when we came back to the truck, I was chatting with a conservation officer, whom I kindly asked if other people on the lake were catching anything. He indicated that no one else had any luck and when I showed him the pictures of the five bass we caught in one morning he was shocked at our “quarry” from the adverse conditions.

I know I am fortunate to have such a fishing guide. We then talked about his job and how he was going to be retiring in a couple of months. I ran into that officer again a couple of weeks later and as we were pulling his bass boat out of the water I showed him the picture of the 6 lb. bass Bob caught. My conservation officer friend said he would die to catch fish like that and joked (more like hinted) that he wanted to fish with us. When no one is catching anything, Bob is. When people ask him where he caught the fish, he says, “in the water.”

The weather this spring has been up and down but for the most part it’s been mild. I have put shed hunting on the back burner and decided to only stumble or trip over them now instead of feverishly looking for them until my head hurts. I see that same car parked alongside the road every day, the guy that my husband ran into that finds 80-plus sheds in this area every year. I realize that if a person puts their mind and focus into something, they can be successful at it no matter if it’s shed hunting or fishing for large bass.