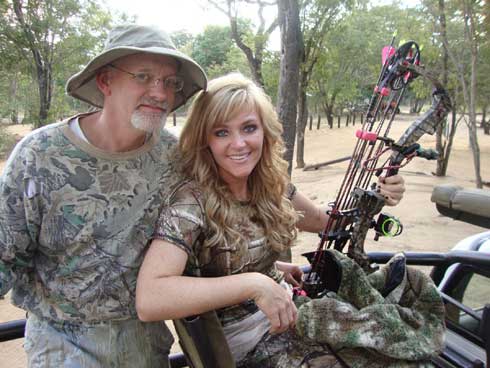 Lee and I sitting in the truck that we did all of our scouting from.

When the truck arrived this morning it was no surprise that the leopard had not come in.  They had already said that the leopard would probably never return to this bait.  It was time to check the other baits.  On our way back to camp we checked the other two trail cams but there was nothing.  I was feeling pretty discouraged knowing that I had blown an opportunity of a lifetime….three times.  And now that we had finally figured out the problem and fixed it the opportunity had passed.

We had two days left. I know from years of experience that you don’t always get your trophy when you are bowhunting.  But I had pictured this trip so differently in my mind.  I was caught up in the excitement of it all and naively assumed that everything would go perfect.  I was wrong.

We decided to give it one last chance with the crocodile.  I was holding out hope that we would find it today.  As we were driving over to the pond, I couldn’t believe how fast this trip had gone by.  I couldn’t believe that we were going home in two days.   When we arrived at the pond John decided that we should check in the water where we had last seen it.  They were hoping that the croc had gotten caught on some logs under the water.  He had the trackers cut down some long poles.  They rolled up there pants and made their way into the crocodile filled pond.  The depth dropped off pretty fast and they couldn’t quite reach where the crocodile had been.  They poked around while we kept our eyes on four other crocodiles that were floating nearby.  They would disappear for awhile and then reappear in another place.  I was holding my breath every time the crocs went under. I was hoping the trackers wouldn’t spend much more time in the water.

We decided to walk around to the other side of the pond for another vantage point.  As we made our way through the long grass that was taller than me. I was looking around anxiously for any unsuspecting crocs.  Sydney was following me with the camera rolling when Stephan and I suddenly jumped after nearly stepping on a croc sunning in the grass.  I never even saw that thing.  Luckily, it was as scared as we were and bolted straight for the water.  We spent several hours glassing and walking around the pond.  We never saw him.

When we arrived back to camp I took advantage of the bright sun and laid out our solar charger from Green Energy Solutions.  We were thankful that we had some alternative energy on this trip to charge all of our camera batteries.

That night we didn’t go to the blind.  It was so relaxing to sit around with every one shootin the breeze instead of having to sit perfectly still in silence for 14 continuous hours.  The elephants came into the waterhole and stayed there for several hours.  When we went to bed we found that we had been invaded by an army of ants.  They were all over in our bed.  I quickly changed my mind and decided I wanted to be back in my blind.

Don’t forget to watch my hunt on Eye of the Hunter airing on Versus, on Thursdays at 2:00 pm EST