by Rebecca Francis
in Bowhunting Posts
0 0
A A
2 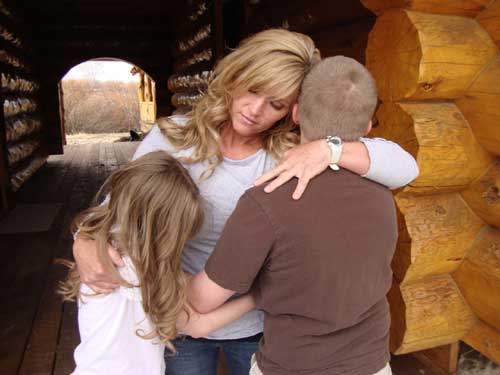 I hate having to leave my children

Day 1
Leaving on a big hunting excursion is always a bitter sweet experience for me. I am full of excitement and anticipation for the adventures awaiting me, yet there is an emptiness in my heart and a physical pain inside that lingers until I return home. Saying goodbye to my children is always difficult and I am not whole without them. I wiped my tears away as I waved to them for the last time, backing out of the driveway. Motherhood is my most important role and is always at the forefront of my life.

It has been a whirlwind over the past few months preparing for this incredible adventure in Africa. With a very short two months notice, I feel like I haven’t yet had the chance to relish the excitement. As my husband Lee and I drove down the highway to the Salt Lake City airport, I finally got that tickle in my tummy knowing that I am leaving on an amazing journey. Still frantic from all that had to be done before leaving, I mentally checked off everything I should have packed, hoping I didn’t forget anything. We met up with the camera woman, Sydney Resel in Salt Lake City. She will be filming the entire hunt for upcoming episodes of Eye of the Hunter airing on Versus channel, Thursdays at 2:00 EST.

The flight to Africa is so long and uncomfortable, so I was thrilled when we finally touched down on the Dark Continent. We had to overnight in Pretoria before we caught the flight to Zimbabwe the next day. The place we stayed was beyond perfect, complete with little cottages, an outside dining area, and even a swimming pool. I took advantage of that day to practice with my bows and make sure that they were still on sight. Our hosts were so kind and gracious and they fed us the most incredibly wonderful dinner that night underneath the stars. We all commented that we would come half way around the world just to eat that dinner and then fly back home. Our host had previously hunted all of the big five, so I listened intently as he offered all kinds of great advice for my upcoming hunt.

I had a permanent smile on my face when I spotted the mist from Victoria Falls as we were landing in Zimbabwe. I was so excited to visit Victoria Falls but knew that it would come at the end of the hunt on our way home. We met my PH John Faul from Kusini African Safaris at the airport. This was our second time hunting with John in Africa. Our first hunt with him was unquestionably one of the best we’ve ever been on. We loaded our bags in his land cruiser for the long bumpy ride ahead to the remote camp located on the border of Hwangi National Park. On our way, we stopped at the cute little town of Hwangi to buy a few groceries.

I couldn’t believe I was actually in Zimbabwe. Having hunted in South Africa five times, I knew this would be a new and completely different experience than I had ever had before. As we neared camp, there was a large group of elephants drinking at a water hole in Dete Valley. Unbelievable! Wild elephants! No fences! This was the real deal! We stopped momentarily to take pictures of these majestic animals, but it didn’t take long before the momma elephant got irritated with us. She charged toward the truck, forcing us to leave.

I was in awe of the beautiful camp when we arrived, and the first thing I noticed were the enormous elephant skulls laying in the camp. Honestly, I was expecting something a little more primitive. We were greeted warmly by everyone. All the rooms were railroad cars on actual railroad tracks with thatch sheds built over them for protection. It was beautiful. They had actually laid railroad tracks to that point to get the railroad cars there, then they removed the tracks. It was very a unique and quaint place to stay.

There was a central dining area that was outside also covered with thatch. It was overlooking a huge savannah with waterholes in the middle. As we sat down to eat our first meal that night, a small group of elephants came in for a drink. They were no more than 80 yards from us. A duiker then moved in, soon followed by some kudu. As the sun set in the breathtaking red sky of Africa, I couldn’t wait to start hunting the next day. I knew there were some incredible experiences yet to come!