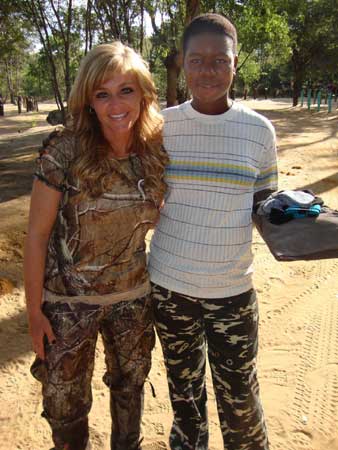 Elizabeth, the sweetest girl that served us all our meals and took care of everything we needed. Her nickname was Bully because of an altercation she had with another girl in camp that was trying to steal her man. Bully won.

Day 2
We arose before light, ready to start the day.  We would be starting the hunt  looking for elephant, so I grabbed my Mathews MR5 bow with the quiver full of 720 grain arrows  and Steelforce African Phathead broadheads.    We jumped in the back of the truck and began driving around.   It was a beautiful morning with a chilly bite in the air.  I was amazed at how thick the surroundings were.

I was shocked at the size of the elephant tracks.  I knew they were big, but wow, a big bulls track is the length of two full grown man’s shoe, and the width of at least four full grown man’s shoes.  After a few hours of driving around we returned to camp for lunch.  I quickly grew very fond of a kind hearted girl named Elizabeth who quietly served us at every meal, always with a smile on her face.  She was always concerned about getting us whatever we needed.  We filled up on some yummy tomato sandwiches, and the PH suggested we go hunt for crocodile during the afternoon.

I was very hesitant about hunting crocodile because we didn’t have the proper equipment with us.   To hunt crocodile, you really need a bow that is set up with a reel and float system.  That way you don’t lose it.  Before we left for Africa, we watched Pete Shepley, President of PSE take a great crocodile with his bow.  He used a float system to locate the croc after it went down.  I was planning to get a kit from Muzzy to hunt the croc, but we just ran out of time.  The Ph said not to worry, it would be in a pond, not a river where it can swim or float away, so there was no way we could lose it.   We decided to go take a look at the crocs and make a decision from there.

There were four trackers, three Ph’s, the owner of the safari outfit, my camera woman, my husband and myself.  When we arrived everyone jumped out of the truck and started sneaking toward the pond.  Shaking my head, I told one of the Ph’s that this would never work.  There were way too many people.  I loved the support and camaraderie but its hard enough to bow hunt with one extra person, so eleven extra people would be impossible.  Just then one of the trackers spotted a croc.  We worked our way up to the trees and stood in the shade to watch.  I saw several crocodile’s eyes floating in the water, but no crocodile bodies.   I could easily see that it would be very difficult to make a good shot, unless the croc was out of the water.

I did learn that if you can guess the measurement from the eyes to the end of the snout in inches that would equate to approximately how many feet long the croc was.  I quickly learned to differentiate the average size croc with a huge one!   It was extremely hot that day, but all I could think is….thank heavens I’m out of the snow!

At camp that night, the owner Hendrick, said, “Poppie, don’t worry, we’ll get one tomorrow”.  I wasn’t completely convinced that it was a good idea yet, but they really wanted me to get one and were confident that we would not lose it.  Poppie is the Afrikaans word for dolly.  Hendrick frequently addressed me by little Poppie and I thought that was so sweet, but often wondered if he took me seriously?

That night the camp cook Catherine cooked a great dinner consisting of grits, gravy with kudu meat and bread.  I felt so fortunate to be sitting in the middle of Zimbabwe, half way around the world that I am accustomed to living in.  It was exhilarating to be sitting outside in the cool evening air, watching the sun go down as a family of elephants moved in to drink at the water hole.  I was pretty tired when my head hit the pillow.