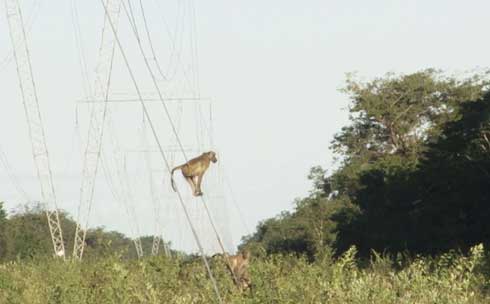 The baboons playing on the power lines

Day 3
We began before light this morning. We grabbed a quick egg with toast and were on our way. We were driving in the chilly morning again looking for fresh elephant tracks. As we were making our way down the dirt road, the trackers motioned for us to stop, they had seen an elephant bull. We quickly stopped, I grabbed my bow and was ready to go. We quietly worked our way into the brush. My heart was pounding. In my mind I could see the elephant’s leg forward and the little area of thinner skin where I would aim. I pictured over and over the arrow penetrating to the fletching. It didn’t take long to get close to the elephant and they told me to get ready. The problem was, the brush is so thick that the elephant can just disappear and once he starts moving, there is no catching up. I caught a glimpse of the massive grey body, but he was spooked and we just couldn’t catch up.

Contrary to popular belief, elephants are not the friendly Disney character we grew up watching on Dumbo. They are considered one of the most dangerous animals on the planet and they will not hesitate to run you over if they catch your scent and want you gone. They will attack you in a moment’s notice. We decided to leave this one and move on. We didn’t have much more luck that morning so we headed back for lunch.

I was so impressed with how well my Prois clothing blended into the surroundings. All the guys in Africa wear khaki colors while they hunt. My husband and I were wearing camo and there is no question that camouflage really helps to better conceal our location. I was also very thankful on more than one occasion that I was wearing my indestructible Prois clothes because the brush is so thick. The branches have two inch long thorns sticking out to grab you every time you go by and my clothes withstood every obstacle put in its way.

After hearing all the scary snake stories I was very thankful for my Kenetrek Gaiters as well. I had originally brought them to help protect me from ticks but I felt so much more protected walking around in the tall grass where puff adders, black mambas, and cobras hide. The African Ph’s are brave souls! They walk around all day in really short shorts and if a snake jumped out on them there would be no chance. I’m thinking of doing all those guys a huge favor and sending them some pants.

While we were eating they said they knew a place where we could shoot a croc and for sure not lose it. I was pretty excited and we headed out after lunch. When we arrived at the place they were telling me about, it was basically a big cement water tank that had been taken over by some crocs. I was very uncomfortable with this situation, and felt that it would be unsportsmanlike. We drove to another pond and decided to build a blind and bait one. The guys built the blind in a matter of a couple hours and it was amazing! I couldn’t wait to try it out the next day. It was too late to sit there today and we needed to get the bait set up so we headed back to look for elephant.

Before arriving back at camp we crossed a very fresh elephant track. We decided to follow it but gave up about 30 minutes later because it was getting dark. We had parked the truck by some power lines and when we arrived back there was a big family of baboons playing around on these power lines. It was hilarious. One of the smaller baboons descended from the top of the power line to the ground. I don’t know how he didn’t burn his hands. They were jumping around like it was monkey bars. I could have watched them all day. They are so human like in their mannerisms.

After dark an elephant bull came into the waterhole by camp. It was a great bull! When elephants drink water, it sounds like a lot of water being poured down a deep well. It is a very unusual and fascinating sound and it is so loud that it can be heard a mile away. The hyenas were howling off in the distance. It was so peaceful and I still couldn’t believe that I was actually sitting in Zimbabwe!

It was my third day of hunting and I had yet to harvest an animal. The camp skinner was joking around about how all he’s been doing is sitting around. I was ok with that. I was strictly bowhunting and that adds a entirely different challenge than rifle hunting. The main reason I bowhunt is for the experience as a whole. I know that there is a far greater chance to go home empty handed but I also know that the reward in the end of a difficult bowhunt far exceeds that of any rifle shot I’ve ever taken. I also have the added challenge of hunting in a completely wild and free ranging environment. It has already proved to be very different than my experiences in South Africa. As I headed off to bed I couldn’t wait to see what tomorrow had in store for me.