by Rebecca Francis
in Bowhunting Posts
0 0
10 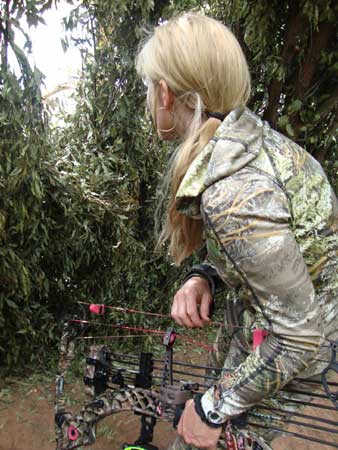 Watching through the window of the crocodile blind

Day 4
What a beautiful morning, I had a feeling it was going to be a good day.   As usual, we all jumped in the back of the truck to look for elephant.  We had only been gone for a few minutes when we spotted a very fresh elephant track.  We decided to follow it for a bit to see if we could find the elephant.  The three trackers took off hot on the trail.  We followed closely behind and I was astounded at their ability to stay on the track.  There were places I couldn’t see the track at all in the dense brush but they diligently pursued  the trail and about an hour later we heard him.

They motioned for me to come to the front of the line and get ready.

Each of the three Ph’s were carrying open sight rifles in case we were confronted with a life threatening situation.  Sydney followed close behind me with the video camera.  My husband Lee was behind her, also carrying a camera.  As we got closer, I would catch quick glimpses of the elephant in the thick brush.  My heart began to beat faster as I mentally prepared for the upcoming shot.  As we came around a large bush, there he was, bigger than life.  I drew back, and the three Ph’s aimed their rifles.  The elephant was facing straight toward us.  All I could see was his enormous ears flapping and his legs kicking at us, which I know is a gesture of anger, and a warning to get away.  I stayed drawn back and I whispered turn…turn….turn…  I knew the only good shot I could make on the elephant was broadside straight through the vitals.

I heard John say,  “He’s 20 yards”.  Still drawn back, the elephant mock charged, moving closer to us.  I heard a Ph yell, “Hey…Hey”, trying to stop the elephant from coming any closer.  John said, “16 yards!”  It felt like an eternity as I remained drawn back.  He made another step toward us and John said, “ get back, get back!”  I stepped backward and to the left behind a big bush, as I finally let the bow down.  In a flash, the elephant had vanished into the bush.

I didn’t have time to digest what just happened, as we continued to follow right behind him.  All the trackers were studying the ground, as I caught a flash of his grey body in the other direction.  I frantically said “There he is!”  I immediately took off after him like I would any other animal without considering that it was an elephant, not an elk.

I got about 15 yards ahead of everyone, when they started running to catch up with the rifles.  I couldn’t believe that an animal that big could not only disappear that fast and not make a sound doing it.  We kept on his tail as he weaved though the dense cover.  About 20 minutes later we finally caught up.  I stepped forward again, nocked an arrow and got ready to draw back.

The colossal bull was about 30 yards in front of us and he was not happy.  He was facing directly toward us and moving closer by the second.  All of a sudden he trumpeted loudly as he mock charged again.  This time I rushed to the nearest tree thinking he’s gonna kill us.  Out of the corner of my eye I saw the others jumping back as well.  Then he was gone.

We started after him again.  A few moments later the trackers heard him behind us.  We all gathered together anxiously looking around.  At this point they explained that an elephant only warns you twice and the third charge is for real.  The elephant had circled around us to attack from behind.  We quickly moved off in the other direction and decided that this elephant was too worked up to continue after him.  It was midday by this time and we were so hot.  We had been following the elephant for over four hours.  I was ready for an ice cold bottle of coke and a chair to contemplate the events of the morning.

That afternoon we headed back to the crocodile pond to get in the blind.  When we settled into the blind I noticed that the window I was supposed to shoot out of was much taller than I could reach.  We pushed the branches down as much as we could, but it was still too tall. John quickly grabbed some blankets out of the truck to stack up for me to stand on.  I am normally not bothered by my less than average height but on this day I really could have used a couple of extra inches.

The trackers set the bait up on the bank luring the croc out of the water.  It was only a matter of minutes before the croc appeared.  There is a reason why crocodiles have survived and evolved over the last million years, they are clever.   The croc raised his eyes out of the water about 20 yards from the bank and just stared at the bait.  Several minutes later, he would move just a little closer then stare again.  This continued until he finally reached the bank.  At this point he barely came out of the water, stare for a moment then would retreat to the safety of the water.  Each time he would come out a little further.  When he finally revealed his entire body on the bank, I readied for a shot.

After studying the archery shot placement guide for a crocodile, I knew I had to aim further back in the body, because of where the vitals were located.  I drew back fascinated by the size and texture of this reptile.  I placed the first pin of my BlackGold sight in the center of his body.  I gently squeezed the the plunger of my equalizer release. Whack!!!  I looked around, the crocodile was still there!  What the heck just happened?  All of a sudden John and Sydney burst out laughing.  The arrow was buried in the branch in the window of the blind.  Looks like I was still a little too short.

John gathered some rocks to place on the blankets, to make it even taller. It took a minute for all of us to stop laughing and contain ourselves then I drew back again and squeezed the release.  The croc jerked sideways and was instantly back in the water.  I gasped and was still shaking.  I wondered if I had hit the croc a little too far back as we watched for any sign of him.   We never saw him again.  I knew that it could take anywhere from one to three days for the croc to float to the top.  We would return the next day to retrieve him.  (Note to self; explain to the trackers when they build the next blind that I only come to Johns armpit so please lower the window)

This had turned out to be quite an eventful day.  What an amazing experience to be that up close and personal with an animal that literally towers over me.  It was so exciting to watch that croc all afternoon, finally getting a shot.  I was definitely getting my share of adventures.  What would happen next?