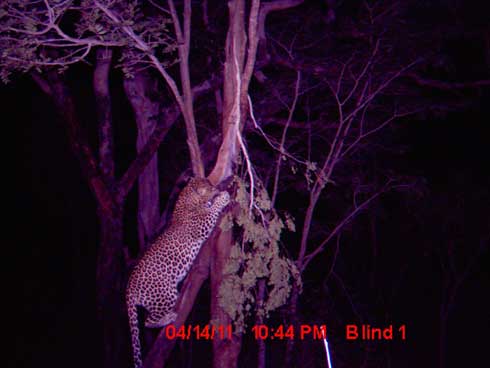 Trail cam picture of leopard feeding on the bait

Day 5
I dreamed all night long about my elephant encounter the day before. I was staring face to face, I mean face to knee with the elephant.  I could see his ivory tusks coming toward me.  I relived the moment through the night wishing the elephant had turned just a bit to give me a shot.  But today was a new day.  We began the day like every other day in the back of the truck, chilled air blowing in our faces, studying intently in the sand for fresh tracks as we drove down the dirt road.  We were having trouble distinguishing the new tracks due to the heavy elephant traffic down the road.  We decided to rake the road.  The trackers jumped out of the truck with an old homemade ax and cut down a tree.  They used thick fiber from another type of tree to tie it to the hitch of the truck.   We slowly drove on cleaning all the old tracks off the road.  This would be very helpful in finding another elephant.

We stopped to check the trail cams at each of the three leopard baits the trackers had set up three days before.  The third bait had been hit!  They spotted the big leopard tracks from the road leading right to the bait.  The pictures from the trail cam showed that around 10:40 the night before, a very large male leopard fed on the bait for awhile.  At around 3:00 am another smaller female leopard fed on the bait as well.  This got my heart pumping.  This was the main animal I came to Africa to get.  I have wanted to hunt leopard for years and it was a dream come true to finally be here hunting leopard.  They showed me the male leopard’s track in comparison to a cigarette box. The track was bigger than the box, indicating that it was a phenomenal leopard.

It was time to build a leopard blind!  I was so excited!  I had specifically set up my Mathews Z7 Extreme for this particular hunt with a BlackGold light mounted on my sight.  It is very small and perfect to light the pins for hunting in low light conditions.  I also had a Hawglite Marauder light screwed in as the stabilizer for the bow.  We used the red lens for the light as red light does not seem to effect the animal at all.  There is a small button on the grip of my bow that I can lightly touch with my pinky when I’m ready to turn on the light.  I had been practicing with this set up at night and was feeling very confident with the results.  Using the two lights simultaneously made it easy to drill the bullseye.

After lunch, we drove back to the crocodile pond to see if the croc had appeared.  Its a 45 minute drive each way so we had to hurry so we could be back to get in the leopard blind before dark.  It was so much hotter over at the croc pond than it was at camp but we spent over an hour glassing the pond.  We searched the edges around the entire pond while the trackers walked through the swamp surrounding the far side of the pond looking for any clue.  Nothing.  Disappointed, we drove back to camp.  John reassured me that there was still a chance the croc would appear in the next day or so.  We would return.

John, Lee and I crawled into the blind at about 5:00 that afternoon.  The trackers built the blind beginning with a frame from tree limbs.  They tied them together with really tough fibers from another tree then placed A LOT of branches and leaves on it, even making a roof.  They made a door out of larger branches tied together.  They left three small openings in the front of the blind, one for the camera, one for John to see out of and the other for me to shoot out of.  I made sure that this time the window was low enough for me to easily shoot from.  They laid blankets on the ground to eliminate any noise and put lawn chairs in there for us to sit on while we wait.  It was so cool!

John explained that we could not make a sound.  No whispering, no moving, no nothing.  He said as soon as we hear the leopard in the tree he will touch my leg once, signaling for me to get ready.  The second time he touches me meant for me to draw back and as soon as I was ready he would turn on the marauder light and shine it at the leopard.  We sat there and sat there and sat there.  It was torturous for Lee to sit still for long periods of time.  He always has to be doing something…bless his heart.  But we had rules in the leopard hut….no noise.  He was being quite fidgety and moving around too much, so we voted that he couldn’t come back the next night.

They customarily sit in the blind from dark to about 11:00 pm then return in the morning.  So when 11:00 hit, the truck rolled up as we had planned.  We called it a night.  I was pretty disappointed as  I had my heart set on seeing the leopard.  Well hopefully we will see it tomorrow.