by Rebecca Francis
in Bowhunting Posts
0 0
A A
8 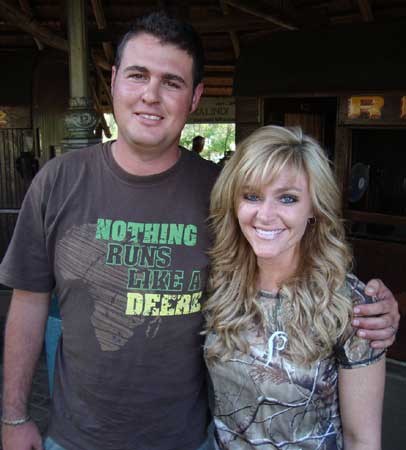 Me and one of the Ph’s Stephan.

At light I could hear the truck approaching. I gathered my things and crawled out of the blind. I felt like I was living a nightmare. I could hear the doors shutting on the truck and people rushing my way excited to see what happened. I wanted to crawl in a hole and hide. I still couldn’t believe I missed my leopard. Here came Sydney with the video camera on waiting for my reaction. I asked her to turn it off for a minute. Lee ran up and asked what happened? I couldn’t even talk! Who misses a 20 yard shot? I can’t remember the last time I was this disappointed in myself. Lee walked over to the bait to join the trackers and Stephan the other Ph. They were staring at the arrow.

When I was finally alone with Lee I said, “I honestly don’t know what happened. This isn’t like me. The bow was drilling the target the night before. I don’t get it.”

As soon as we got back to camp I shot the bow. Three arrows touching right in the bullseye! Lee watched the video footage over and over trying to see what could have happened. We know something was drastically wrong because it shot two feet low and two feet to the left. We finally came to the conclusion that the arrow must have hit a limb upon leaving the blind, deflecting it to the left and low. There was no other explanation.

John and I climbed back into the blind at 5:00 that evening. John asked if I could see through my peep sight ok. After cleaning the window of any branches, I drew back. I could see through my peep perfectly. The window was ready. This was it. If the leopard comes back tonight, he is going down. Just like the night before the darkness brought with it an awakening of the animals that prowl at night and their enchanting sounds. The baboons started first, barking and fighting and playing. I could only imagine in my mind what they may be doing as it was pitch black. Then came the hyenas but they were closer than the night before. They were all around us. We could hear the elephants not far off as well. I couldn’t get over how alive the night became. There was never a moment of silence and it was impossible to doze off because of all the action going on right outside the blind.

We heard a branch crack not far from the blind. Then the distinct laugh of a hyena on the left. Then one on the right. It sounded like they were running all around. I switched the video camera on to capture the heart pounding sounds and anything else that might happen.

Just then we heard something running fast toward the back of the blind. John reached down and put his hand on his .458. Whatever it was it stopped right outside the blind. I could hear it breathing three feet away from me. We didn’t move. I was sure whatever it was, it could hear my heart pounding. The breathing sounded deep and gruff. The leaves of the blind were moving. Then all of a sudden a bunch of hyenas came running toward the blind. Whatever was right outside the blind ran off. The hyenas moved in. I could hear several all around us sniffing the blind and rustling the leaves of the blind as they investigated what we were. I put my hand around my .375 H & H. They just kept sniffing and running around. After they moved away from the blind I slowly stood up to look out the window. The moon had come up just enough to cast a shadow on the pack of hyenas trying to get the bait. I could see several smaller ones, but there was one really big one ten yards in front of the window. He was light colored and his neck was long, his body looked distorted. They are really hideous looking creatures and they never stopped moving.

It seemed like an eternity that the hyenas were running around the blind howling, laughing and searching for something to eat. They were lured in by the smell of the bait so they knew something was dead very close by. I kept moving the aim of my rifle toward the closest sounds to me. It was unnerving. John touched my shoulder and said, “Don’t worry, they are cowards and will run if we make a sound”. That made me feel a little better but some of the other guys at camp had talked just that day about how a pack of hyenas would attack people. So which was it? What an exhilarating experience. After the hyenas left, John explained to me that they had been chasing the leopard and it was the leopard that stopped outside the blind. He knew this because as soon as it ran from the blind it jumped in the tree and grabbed a bite of the bait then jumped out, as the hyenas were running in.

At 3:50 in the morning the log cracked as the leopard climbed the tree. My heart began to race. I methodically, but silently stood up and grabbed my bow. Here we go. This was it. I drew back and John turned on the red marauder light. The elusive leopard looked over then went back to eating. This time I took more time aiming. He wasn’t going anywhere. I settled the 20 yard pin just behind the shoulder. I held it. I was steady. I told myself, this is an easy shot. Its 20 yards. I’m just aiming at a target. It’s ok. I released. Thwack! No! I didn’t like that familiar sound. Please tell me I did not hit the log. I asked John frantically, “Did I hit him?” John didn’t know. He shined the white light and there was the arrow, buried in the log. No freaking way! This time I was pissed!

How? How did this happen again? I was so mad! This was not happening! I sat back down without saying a word. I sat in silence furious and stewing over what in the heck was going on. About 20 minutes later, I heard something climbing the log to the bait. It couldn’t be the leopard! Unbelievable! The leopard returned to the tree again. I almost didn’t want to try a shot. Something was wrong and I had no idea what! I never dreamed he would come back so I had to grab an arrow and get ready. I drew back hesitantly. John asked, “Are you ok?” I didn’t answer. He turned the red light on. Once again I put the first pin behind the shoulder. Before I released I thought, this is it, if I miss this one, it’s over. I released. No thwack! “Did I hit it?” John thought I had. We shined the light and there was no arrow in the tree! I quickly replayed the footage frame by frame. I couldn’t tell if he was hit. I just couldn’t figure out what was going on. Then I remembered John asking me if I could see through the peep.

I drew back in the dark like I was setting up for a shot. Then I told John to shine the light behind me. I could immediately see the problem. My head was tipped so that my eye was focusing on the left side and below the peep. I was not looking through the peep! Because John was shining the light behind me, I could see that I needed to adjust my eye to see through the peep. My eye was entirely missing the peep in the blind because it was pitch black in the blind. Before the hunt I spent a lot of time practicing in the dark and I was very accurate. But I just realized that when I was practicing, there was very dim back light from the buildings behind me enabling me to see through the peep. Unbelievable! Something that simple has just cost me a second and possibly third miss at an African leopard.