by Rebecca Francis
in Bowhunting Posts
0 0
A A
3 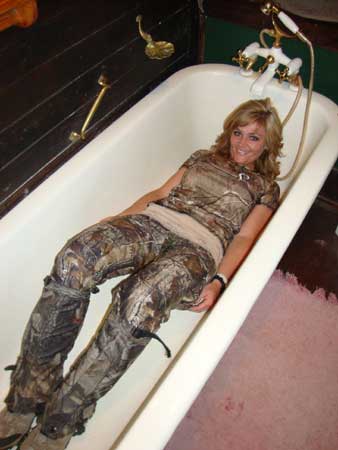 The bathtub was HUGE! Or else I’m small.

At light, the sound of the truck came rolling in. I did not want to face the guys again. However there was some feeling of relief this time, I knew the problem and could fix it. The night before I assumed it was a limb and it wasn’t. Their jaws dropped when they saw the arrow in the log again. I told them the story of the hyenas and leopard. We rode back to camp in silence. When we got there Lee had me draw back with my eyes closed, then open them. Sure enough, the peep was a little too high. He adjusted the peep then tied a string around the bow string so that when it hit my nose I could tell whether or not I was in the right place. It works like a kisser button would, ensuring I would be in the right spot every time I draw back.

I practiced drawing back over and over with my eyes completely closed until I was confident that every time my nose hit that string the peep would be lined up with the sight. I still couldn’t believe I had missed the leopard for something stupid like this. We felt pretty confident that the problem was fixed but we decided that we would add a red light above me in the blind to ensure that I didn’t miss the peep again.

I tried to get some sleep from being up all night for two nights in a row but it was difficult. The afternoon was quickly approaching and I decided to take a quick bath before we headed out for the fourth night at the leopard blind. The water heating system at the camp was really cool. A fire had to be kept going all day in several different tanks in order to have hot water.

It was nice to soak in a hot tub for awhile after two very long nights. I reminded myself that everyone one misses occasionally. That is the challenge of bow hunting. That is why hunting is called hunting. This was the first time I had ever bow hunted at night, and had no idea that seeing through the peep would ever be a problem. What a costly, difficult lesson to learn. I still didn’t feel any better about it. I also had to remind myself how difficult it is to take dangerous game on free ranging land. I knew that once I committed myself to something this risky and bold I would have to be prepared for some very tough lessons. This was one of them. On the other hand, I am also anxiously waiting for this undertaking to unfold with increasing richness and wonder. Hopefully the leopard will come back in tonight. I know my bow is ready this time. It will be ok.

Like clockwork, we climbed in the blind at 5:00 pm. I was so tired from staying up for so long, that I started to doze. John and I took turns bumping each other when we fell asleep. A couple of times John was snoring so loud I had to push him to wake him up. He was pretty tired too and probably sick of being in the leopard blind. When dark arrived, we both noticed how quiet it was. It was completely different from the past two nights. It was a very long night. We didn’t hear any of the sounds we were used to hearing. The leopard didn’t come in. No surprise.