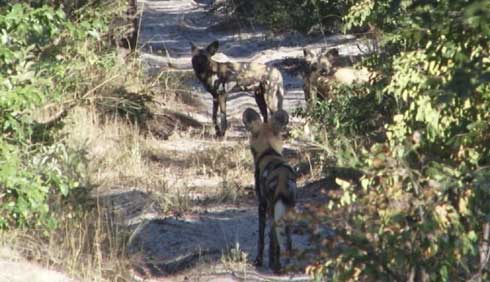 John and I were sound asleep when the truck showed up at dawn. They rushed toward us hoping for good news. I took some time to talk about the uneventful night on camera. As we drove back to camp things were weighing heavy on me. This trip was just not turning out like I had planned. I had missed the leopard three times and he was now most likely gone for good. We hadn’t found the croc, I hadn’t harvested anything and time was running out.

We decided to drive over to the pond and look for the croc. On our way we ran into some African painted dogs. What a treat to see these creatures. They are endangered and protected and there are very few left. The coloration on these dogs is beautiful. We watched them for quite a while and as we drove off they followed us, like normal dogs would.

When we arrived at the pond there was no sign of the crocodile. We glassed for quite some time but I was very concerned. We weren’t having any luck finding my croc. The trackers walked the edges as we continued to glass. The Ph’s were starting to think that the croc may have gotten caught under a log or something else in the water. We would come back tomorrow to look again. I didn’t want to give up.

We got back to camp just in time to gather things up and head back to the leopard blind. We were spending so much time at the blind that it was starting to feel like home. We sat down in our chairs hoping for more action than we had experienced the night before. We noticed it was another very quiet night. We knew the chance that the leopard would come back was nil but we had to give it one more shot. It was hard to stay awake. No leopard.