by Tracy Breen
in Bowhunting Posts
0 0
A A
1 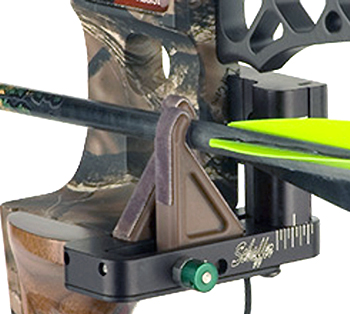 Schaffer Performance Archery is proud to introduce the Opposition Arrow Rest. A unique arrow rest that eliminates many of the problems associated with traditional full-containment drop-away arrow rests.

As bow speeds increase, arrows are leaving the string faster than the launcher arm on the arrow rest can get out of the way, resulting in the arrow coming into contact with the rest which reduces accuracy.

The Opposition Arrow Rest solves this problem with Dual Jaw Technology. The rest has two jaws: one jaw squeezes the arrow from the left, one jaw squeezes the arrow from the right. When the bow is fired, each jaw glides out of the way, allowing the arrow to pass between the jaws without touching the rest. The jaws can’t bounce back so arrow and vane contact is a thing of the past. In fact, the Opposition rest can handle arrow speeds in excess of 418 FPS!

The rest is whisper quiet, easy to paper tune and because the jaws pinch the arrow into the center of the rest, every time the bow is drawn, the arrow is locked into place. So regardless if a hunter is stalking a mule deer or shaking like a leaf aiming at the whitetail buck of a lifetime, the arrow will not shake, wobble or vibrate. It is locked into position.

The jaws on the Opposition rest are made of bomb-proof Delrin which can handle anything Mother Nature can throw at it. Other key features include custom fit riser lock side plates that fit snugly onto the riser of the bow, making the rest and riser one and eliminating the chance of the rest coming loose or vibrating during the shot.

The Opposition rest has an easy push button that allows the archer to lock the arrow in place before they draw if they choose. If the button is not pushed ahead of time, the jaws quickly squeeze the arrow upon drawing the bow.

The Opposition Arrow Rest rounds out a complete line of innovative products from Schaffer Performance Archery including the Opposition bow sight.

The Opposition Rest: It’s like putting your arrow in a vice! No wiggling, no jiggling; just super smooth performance, shot after shot.

Is Some Wolf Management Better Than None

Getting My Record Gobbler