Stalking the Dunes of the Kalahari: Pt 2

by Engee Potgieter
in Bowhunting Posts
0 0
A A
2 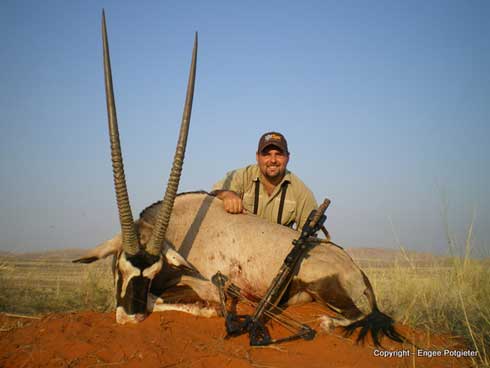 The next morning started out just the same as the day before as Roland and I headed out in search of a trophy Gemsbuck, we spotted a great many fantastic specimens but getting to within shooting range with the crossbow was proving very difficult. We did however get tantalizingly close, a mere 26 yards, to a terrific lone bull Roland knew of and which we both agreed would easily go 40 inches but I never could take the shot, leaving me with my hands in my hair!

My PH did however manage to draw blood; Roland took a beautiful Springbuck with my crossbow at 33 yards, his first ever with archery equipment!

My quest for a trophy Gemsbuck did however work out, as two days later Stef and I were out alone walking along the crest of a high red dune stopping every so often to scan the area with our binoculars, when Stef drew my attention to a lone Gemsbuck way off in the distance. As soon as I laid eyes on him the hairs on the back of my neck stood up, and even though he was still a good 600 yards away a blind man I could see that this was no ordinary Gemsbuck.

We watched as the massive bull kept walking purposefully in a westerly direction when Stef spoke up and told me that he had a good idea this bull might be heading to a waterhole some distance away where he had once seen this particular bull before. Dropping down off the back of the dune we wasted no time in heading straight for the waterhole. Although it was a gamble and I must admit that I was a little uneasy about not keeping the bull in sight, I was confidant in Stef’s hunch and placed my trust in his knowledge of the property.

We had to cover quite some distance and had to beat the bull to the waterhole if I wanted any chance of getting a shot so we slowly jogged for most of the distance through the soft sand which left my leg muscles screaming for reprieve. The effort would be worth it however as we drew closer to an open area where Stef indicated the Bull would come through if he was still holding his course. Panting like a racehorse I quickly had a look around and could spot a well trodden trail within easy shooting distance of a clump of Swarthaak’s. Stef wanted us to continue on to the waterhole to wait for the bull there but I disagreed as there were two good reasons for setting up an ambush right there. Firstly the bull should be coming past us totally oblivious of any danger and the few minutes we could wait for him to come by would afford me the opportunity to catch my breath and make an accurate shot. Stef agreed with my reasoning and we quickly took up our positions.

I was right at the edge of the clearing, hugging the cover of a small thorn tree with Stef lying down flat a couple yards behind me. No sooner had I gotten settled in when the suspicions started. I started to doubt my decision, this was very big country and I needed the bull, which I hadn’t yet seen again, to come by on this very trail I was sitting over if I wanted a shot. It was a gamble at best but at least both Stef and I agreed that, given our choices this was the best plan.

I was still going over and over everything in my head when I was drawn back to reality by a soft whistle from Stef, without even turning around I knew what he was trying to do and as I carefully turned my head to my right I caught a glimpse of a Gemsbuck coming along the trail, not just any Gemsbuck but The Gemsbuck!

The magnificent bull was walking ever so steadily straight toward us as I slowly raised the stock to my shoulder without taking my eyes off the bull. My heart beating out of my chest, my mouth totally dry, I couldn’t believe the moment of truth was upon me.

As the bull drew level with me I let loose a sharp short whistle while at the same time clicking the safety off, just as the crosshair of the crossbow’s scope came to rest tight behind the bull’s massive shoulder. I squeezed off the shot and sent the bolt blasting through the bull’s chest as he stood there at 40 yards. At receiving the shot the bull hunched up and took off in a headlong dash managing only about 80 paces before going down in a cloud of dust.

As I sat there in utter disbelief at what had just happened silence again enveloped me and the only thing I could distinguish as my eyes stayed glued to my downed trophy was Stef’s enthusiastic slaps on my back. It had worked, the plan actually worked!

We slowly got up and made our way over to the regal bull as he lay amongst a sea of yellow grass, I knelt next to him and raised his head, still speechless at the utter beauty of the animal. The Gemsbuck bull was not only the biggest I had ever had the privilege to take personally but was also the largest bull I had ever laid eyes on. The longest horn taped out at an incredible 43 3/8” with a total SCI score of 103 5/8”, that if entered would not only be the new Crossbow Record but also the general (Compound) Archery World Record.

A once in a lifetime trophy indeed and one I will always be grateful for being given the opportunity to take. Thanks again kindly to both Dr. Peter Kriel and Roland for the opportunity to hunt the flowing red dunes of FM Safaris.

The Best of Kansas