A Bird? A Plane? No, It’s Super Gobbler

Below is a picture  of the view to the East. The ranch road we took to get down where we’re hunting is at the top of that hill. A rifle blind is up there too. Below the road a rocky ledge drops off steeply down to our level. I took this picture earlier in the day … before we met the Super Gobbler. 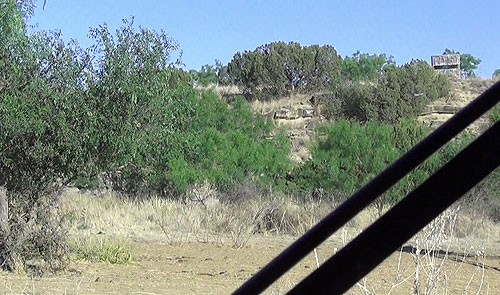 Fred got out some Trail Mix and we passed it around. But not for long.

A hen hurried by us on our side of the creek bank, 15 yards away. 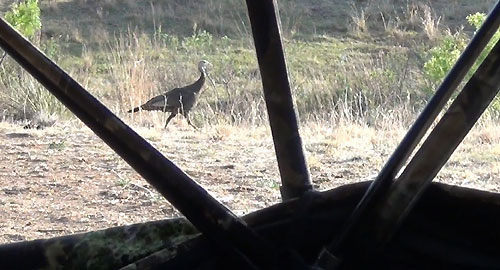 Just then a nice gobbler walked around the right side of the blind and I saw him in the right corner of the shooting window — less than 10 yards away. He was dialed in on the hen and strolled out of sight before I could get on him. 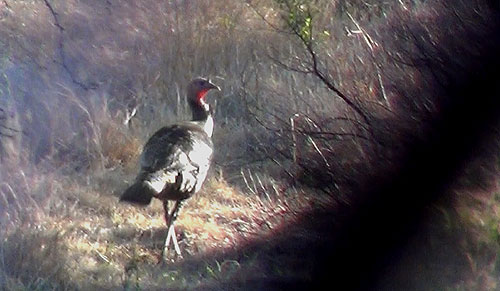 I soft yelped at the gobbler, hoping to get him back in sight. It didn’t work.

But it did bring in two gobblers from across the creek. 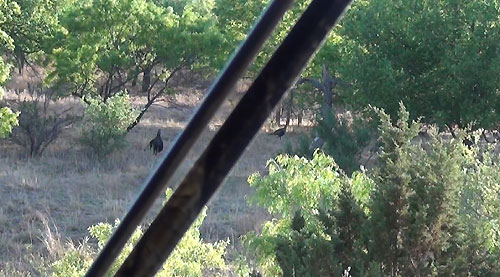 Both gobblers flew across the creek. We waited a few minutes and Fred saw them standing under the 15 yard cedar tree.  The sun was lower not and wasn’t lighting us up inside the blind so things could work out. 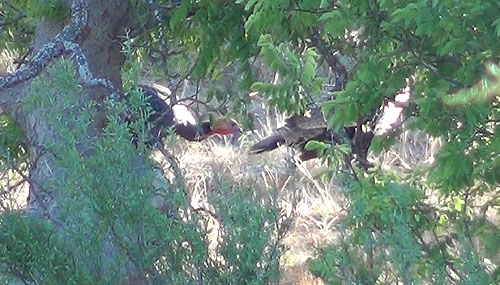 We noticed another visitor. A cow, standing 29 yards our right, staring at the blind. I looked back at the gobblers and they were gone.

I guess I don’t know for sure that the cow buggered the longbeards off, but I’ll bet he didn’t help. 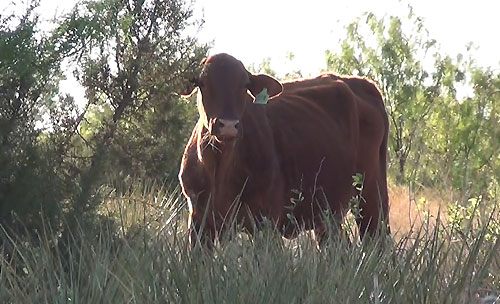 After the cow left another gobbler came around the left side of the blind. Since that’s the side of the blind I’m sitting on I don’t have a shot if a gobbler gets to far to the left. And this one did. 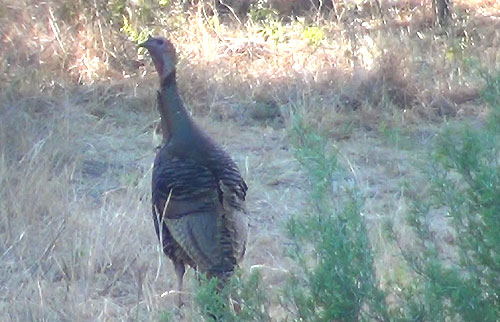 Fred’s ThermaCELL was at the end of its ThermaCELL secret-stuff pad and some mosquitoes started flying around inside the blind. Just today we had hours or use out of  it. Fred replaced the pad and the mosquitoes left the blind to us again.

We didn’t have much time left before roost time. I called every 5 minutes, just in case a gobbler was still in our area.

Some gobblers come in hotter than others when you call. Some really wear you out they come so cautiously and slowly. Some run right in. But I’ve never seen what was about to happen to Fred and I this afternoon.

The sun got low and the shadows of light disappeared on the ground.  We heard a gobble to the East, from over the top of the hill. A second gobble was closer.

I called again and made a narrow opening in the vertical window right by me so I could see him if he came in.

“There he is,” Fred whispered. “He’s a monster longbeard. Up on the ledge, close to the gun blind.”

I cut at him enthusiastically. No way did I expect what happened next.

I heard his wings and hooked up my release.

Ka-Plop. He landed right by me. I saw him, only a yard away, through the opening I’d made in the window. Sure enough, it was a huge longbeard with a fire red neck and head and a fat rope beard. A flying monster gobbler, a Super Gobbler.

I froze so I wouldn’t make any noise or do something he might see, but still was ready to draw and shoot. Super Gobbler quickly went out of view in the window. A few seconds crawled by at turtle speed. 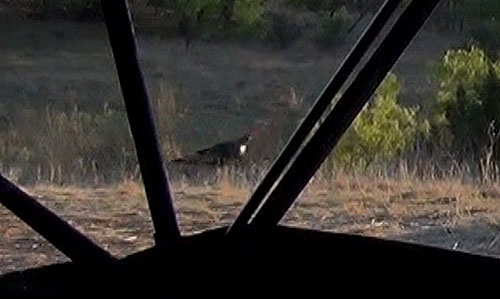 (I lifted the picture from Fred’s video and he didn’t have time to zoom it in.) The Super Gobbler is 15 yards away. I drew when Fred said he was coming. Frankly, I was surprised that he was as far out as he was. But, 15 yards is good bow range. I moved my pin to him.

Right then the Super Gobbler buggered on us and picked up his pace. And I couldn’t get my pin on him before he was out of bow range.

Unbelievable! The gobbler jumped off the rocky cliff to the East and flew right to me, only a step away. I’ve never had it happen before and probably won’t ever again.

Sky Watkins picked us up after we called him. Dinner was ready and it was BBQ and the fixings to die for. Tomorrow morning Fred and were going to this mornings spot. This time we were gonna put our blind where the other blind was and be right where the wild turkeys had come in.