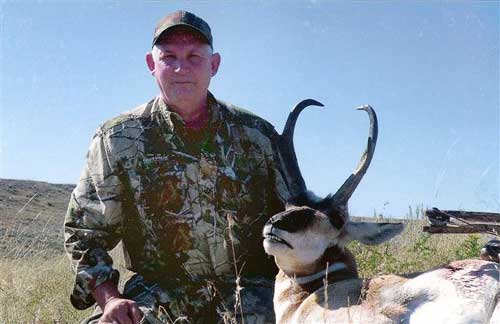 Author with his trophy pronghorn.

I am a disabled PA coal miner. I’ve had my neck at C4 through C7 and shoulders hurt in a mining accident in 1993. I was able to return to archery hunting with the help of a crossbow and I joined the PCBA in 2001. The PCBA hosts an antelope hunt in Wyoming and I was going to make this year the second time to hunt in Wyoming, having harvested a nice 11 inch buck there on a previous year’s hunt.
When I received the message from Jake Jacobsen that I was drawn for the 2009 hunt I was really excited to say the least. It’s like a boyhood dream.

The plane trip to Denver was great. While waiting for my plane I saw a man dressed in camouflage and talked with him a little. I arrived in Gillette on Tuesday to get a chance to get used to the weather. On Wednesday other PCBA hunters would be arriving and meeting at Rocky Mountain Discount Sports shooting range to sight in their bows.

At the range I was happy to see that my crossbow weathered the trip in the plane and was shooting right on. After everyone was sighted in and tags were purchased we arrived at the Family Life Church for our meeting and supper. The dinner was fantastic and the servers were wonderful.

Thursday morning the hunt started bright and early with breakfast at 5 AM. My guides were BJ and JW who took me to my blind. By the time we got to the blind daylight was breaking. As we drove to the blind a small herd of antelope was walking in the middle of the dirt road. I asked BJ about the blind I would hunt and he pointed his finger and said, “Its right there where the antelope are standing”.

JW and I got out and walked slowly to the blind as the does eased out. At 8 AM we had eight does and a buck come into sight. As the does made their way toward us, the buck remained at 45 to 50-yards out. Since I wanted them to be within the 30-yard range I wouldn’t be trying a shot at him. At about 9:30 AM a buck came zooming by chasing a doe. Wow talk about moving fast! I tried to get my crossbow up but they were out of range before I could get set up.

We saw a few more bucks chasing does but nothing came into shooting range. By 11 AM things had really died down. JW made a few calls and said another guide, Travis had seen a herd of antelope at his place and mentioned there were some nice bucks chasing does. Travis had set up a blind by a small water tank so JW and I packed our gear and headed there.

Once in the new blind I ranged the water tank at 17-yards. Antelope were on the hill 200-yards away and Travis was right, there were a few really nice bucks in the herd. We watched them until they were out of sight. JW was just about to make a phone call outside the blind when I noticed a buck coming down the road to the water tank. JW got back into the blind quickly and noticed another buck which I had not seen. This buck was the herd buck and was chasing all the smaller bucks away. The herd buck slowly made his way to the water tank turning broadside at 17-yards. My shot was good and he leaped over the tank and took off for the dirt road. As we watched he just toppled over.

After a few high fives and congratulations we called Travis who came up with his truck. We took photos and took the antelope to Travis’ where he caped him out. A quick measure of the horns showed my buck to be a tad over 14 inches. Wow, my biggest one!

After breakfast on Friday guides BJ and Chris were taking me out to hunt doe when we stopped at Travis’ house. While waiting we noticed the blind I had hunted the day before and knew that Bryan Pourcha from Alabama was hunting there this morning. While watching we saw a buck walk by the blind and noticed he jumped and ran about 40-yards and collapsed. Chris and I were whopping and hollering and went out to help him. The look on Bryan’s face was priceless.

After we got Bryan’s picture and his buck was taken off to the butcher, we headed out for a doe. We located a few does bedded down in a small ravine. We walked around the hill to a clear field about 20-yards away where a buck and some does spotted us, stopping us in our tracks. The does were too far out for a shot however. After riding around some more we spotted a doe and stopped, Chris said it was about 43-yards so I placed my 30-yard crosshair over her a little and shot. Another good hit. She traveled about 70-yards and fell over. Another round of high fives, pictures and then off to the butcher.

On Saturday evening we had a nice dinner. There was a lot of handshaking, hugging and good-byes.
The PCBA officers and the staff in Gillette are doing a fantastic job with these hunts for the membership. A very special thanks to Steve and Linda Bricker, their family and all the guides in Unit 17. With a little luck I hope to be out there to hunt again.