by Trevon Stoltzfus
in Bowhunting Posts
0 0
A A
2 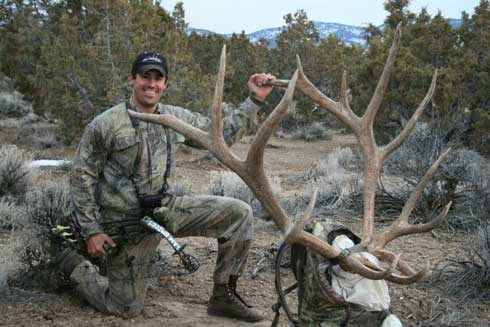 Most successful bowhunters would agree that bowhunting is hard. The fact that an archer has to be skillful enough to trick the eyes, ears, and nose of any game animal just to get within a bows limited kill zone is difficult by itself, but even more difficult is the execution of a lethal shot under that immense adrenaline and excitement.

I am sure you know someone who, every year, seems to connect on a trophy animal, while others eat a lot of “tag soup.” It has been said that 10% of bowhunters kill 90% of the game, and I call these guys and gals the ten percenters.

Is it just that these successful archery hunters are blessed with an inordinate amount of luck, or is there something more? As I continue to grow as an archer and a bowhunter, I have been fortunate to meet many great bowhunters who I look up to and try to emulate. In these mentors I have consistently seen common threads that appear in what they do and how they think which helps to give these “killers” that edge. Identifying and adopting these traits has helped me to be much more successful in the field.

Visualization:
For years athletes have been practicing visualization as a way to prepare for competition and Dave Beronio, a good friend and hardcore bowhunter from Nevada, states it this way, “Growing up ski racing, I was fortunate to make it to an elite level. I was a physically fit and talented athlete, and the mental aspect was something I always enjoyed working on. I would take a seat quietly at the top of the start area and prep for my run. Multiple times I would visualize myself in the start gate looking down the course, and with movement of my body and eyes closed, I would start the course in my head. Because I knew the course setting and terrain, I could see myself making every turn and feel every movement of my body. I would visualize the fastest line I needed to take to win. By visualizing this over and over before my run, I could get on the course and then during my run it would feel like muscle memory would take over. The course would take on a “second nature effect”. Even though it would be my first run physically on the course, it would feel as though I’d been down it a dozen times already.”

For Dave bowhunting is no different. He goes on to explain, “Visualization is something I often do while sitting on the couch with my eyes closed, or before I fall asleep at night. In my head I play the scene over and over through to the final seconds of a hunt. In my mind, I see the animal standing there in front of me. I visualize the flight of my arrow, picturing a clean shot and follow through. I can still picture my pin on the animal even after the arrow hits its mark.”

By visualizing these exciting moments, where most bowhunters allow their nerves to get the best of them, a successful bowhunter can react calmly as if he has already been there, if only in his mind.

I have found that visualization can play an important role in keeping me sharp while in the field. If I am in a treestand or a ground blind I visualize a good buck walking into my ambush within easy bow range. In this exercise I expect to see that trophy, and work smoothly through the steps it will take to harvest that animal.

My every motion is already thought out and planned in my mind; from grabbing my bow and attaching my release to the string all the way through settling the pin on the vitals and releasing a perfect arrow. Be forewarned that there is a fine line between solid visualization practices and hypnotic daydreaming. The former keeps you sharp and alert the latter just makes you sleepy and inattentive.

With these simple visualization tips you too can make aggressive steps toward becoming a 10 percenter!

Strut and Rut Energy Shots – Ammo For Your Body

Strut and Rut Energy Shots - Ammo For Your Body