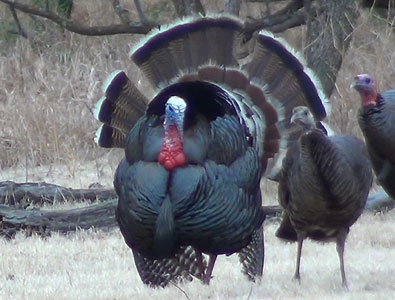 After a good home cooked breakfast at the Big Johnson Outfitters lodge Sky Watkins drove Fred Lutger and me out to the area we hunted yesterday morning [where we saw the Kent Daddy longbeard]. This morning the wild turkeys did not come down the same trail they did yesterday. However, a bunch came into the area. Most were hens and Jakes but we did see three nice longbeards chasing hens and Jakes around in the trees.

We had the blind set up to shoot out of the front and to the left. But the turkey action was behind us and to the right, so we decided to open up the back and right and close up the front and left.

When Fred looked through the back side he said, “There’s a big Strutter behind us.”

We didn’t know it but the next two hours were gonna be rocking. 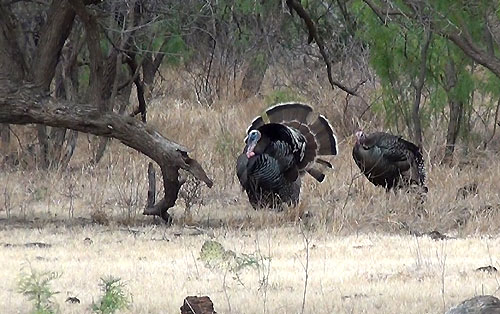 Fred switched to his slate call and gave the two gobblers we saw some yelps. Immediatelyt, they both gobbled. The strutter was the Kent Daddy from yesterday morning. They were 70 plus yards away. 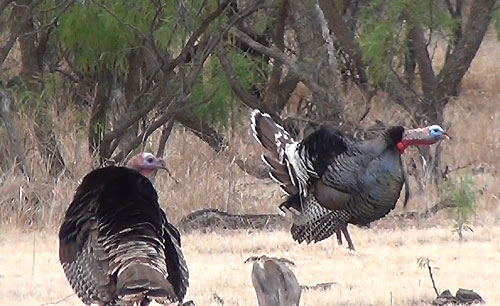 Kent Daddy was busy strutting around a nearby Jake. He drug his wing feathers on the ground and moved side to side. But the Jake ignored him. 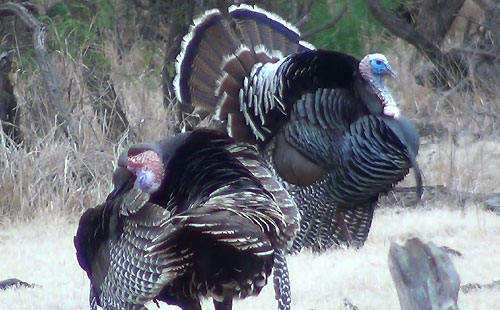 Another gobbler walked out of the woods to KD’s left and went into a full strut. He had a nice round, big fan. 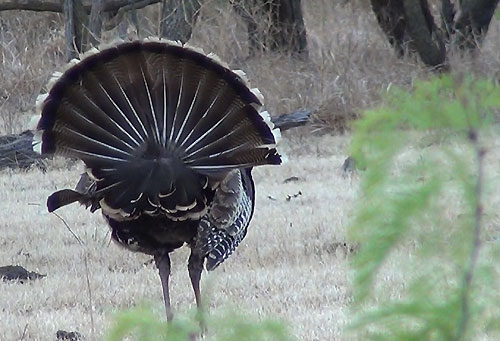 The new strutter moved toward the other two gobblers. The Jake eyeballed him but KD drummed his way sideways and wound up between the other gobblers. 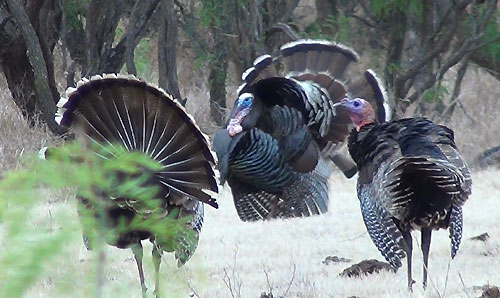 I guess the pressure was too much for the Jake because he flapped his wings and hurried between the two strutters and went into the woods. 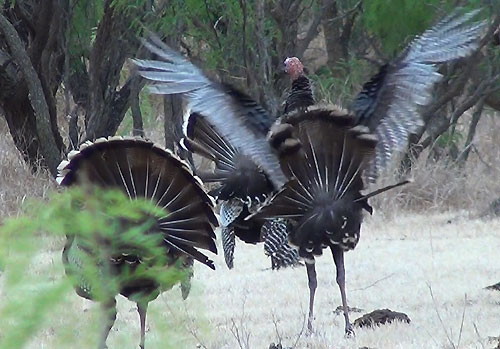 Now the two gobblers squared off in front of each other. The new strutter stalked to the right. 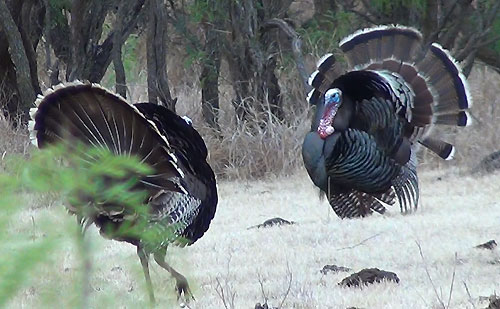 Woops, the Jake was not gone. KD swished to the left and just missed cutting off the Jake. 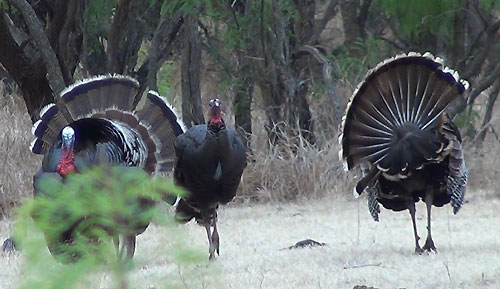 Ahhh, now things make more sense, a hen came out of the woods and the 3 gobblers got in her path. 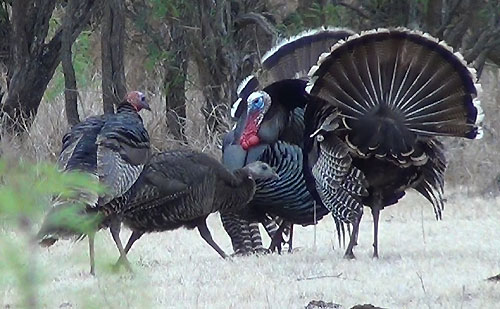 The hen zig zagged and darted behind the strutters. Both strutters were busy showing off. But the Jake followed the hen. 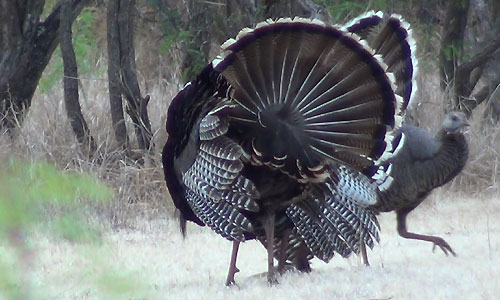 Hurrying, the Jake cut the hen off and it did a 180 and went back by the two busy strutters and kept on going. The Jake followed. 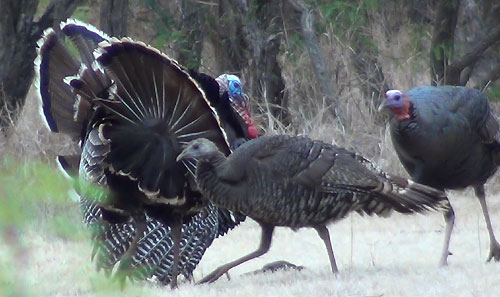 Both Strutters dropped strut and milled around for a while. 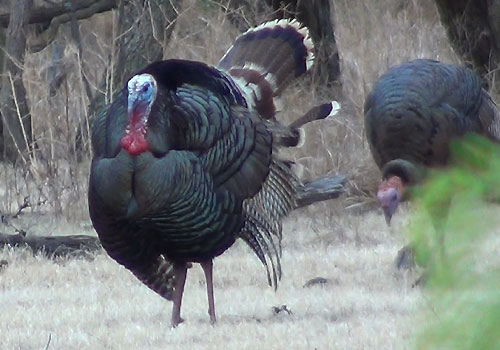 Here is a pic of Kent Daddy as he struts back up and sticks his head up high. He has a dandy set of spurs and a thick beard. But hs tail fan has lost several feathers. He is awesome to see. 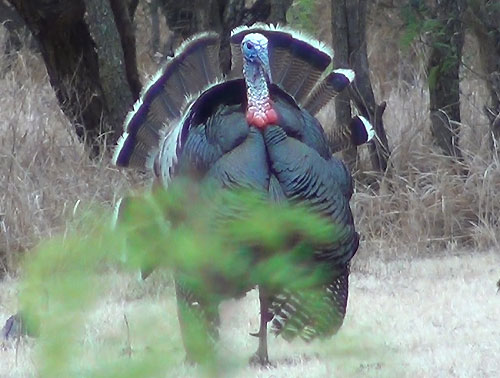 Kent Daddy drums his way over to the other strutter and it watches as KD gets closer. The second strutter has a round, mature fan and is a large gobbler but his beard is short, it probably got cut off. 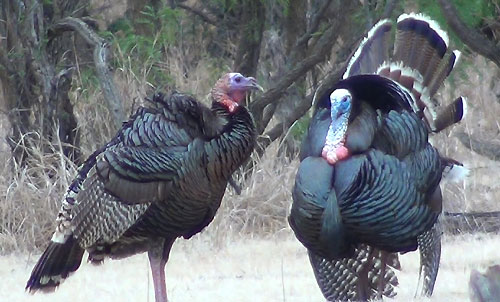 Kent Daddy struts right to the other gobbler and it turns and moves away. 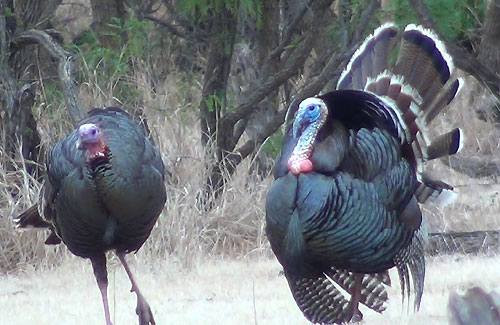 A Jake joins them and all 3 gobblers walk around each other for several minutes. 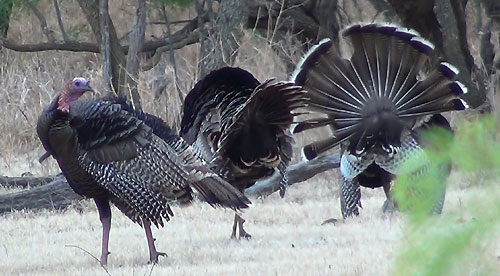 Over an hour has passed and now the gobblers walk along the edge of the woods and go into the trees.

Nothing happens for a while and then we see a hen scratching up a cow pie. 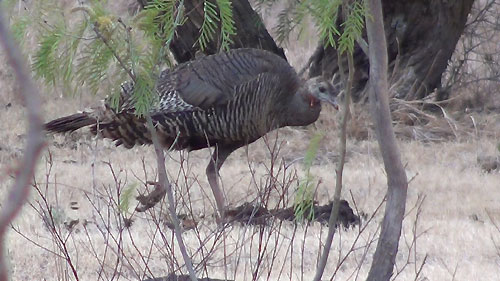 Then the hen picks through the pie and plucks out a snack. 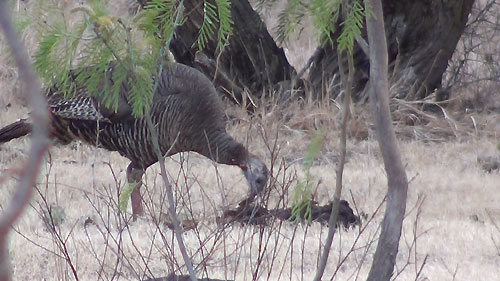 Good news, we see Kent Daddy in the woods, strutting as usual, and other wild turkeys are coming into the area. 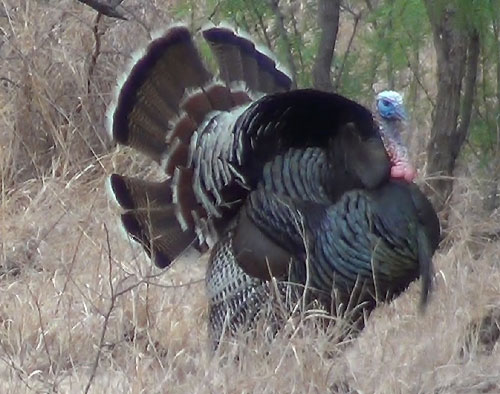 Now, if we could get the Kent Daddy to show off over here where we are.

Introducing a Child to Archery