Setting Your Goal With Trophy Whitetails 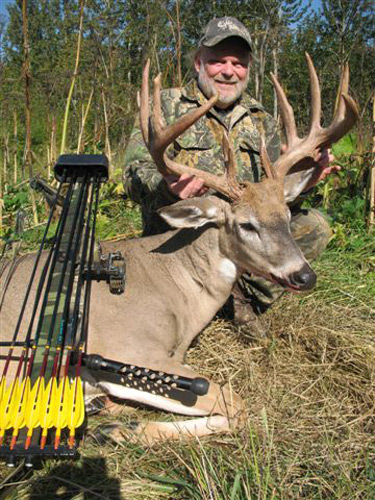 Author with one of his trophy whitetails.

By far the most popular big game animal for bowhunters is the whitetail deer. There are a lot of reasons for that. To begin with they exist in huntable numbers in most states and Canadian Provinces. They also exist in the areas of the country most densely populated, and therefore where the most bowhunters reside. As a result they can be hunted close to home by over 80% of all North American bowhunters. This makes them the ideal “first” animal species for most to pursue.

They also have some of the longest archery seasons with hunting available in many areas from September right through to the end of December, and beyond. They are good to eat, challenging, and if you harvest a mature buck, impressive on the wall.

That brings me to the topic of this column, harvesting a trophy whitetail for the wall. If your goal is a trophy whitetail to hang on the wall things get more difficult than if you are just looking for some venison for the freezer, or some enjoyable time in hunting camp with a few friends. The first thing (in my opinion) you need to do is decide what “trophy” whitetail means to you. Keeping in mind that bowhunting is a very personal sport, remember that what is a trophy to me, or your uncle Bill, doesn’t necessarily have to be set as your standard. You get to set your own standard, which is one of the things I like best about this sport.

If you haven’t already decided what your personal standard/goal is for a mature whitetail, its time to start the process. To avoid frustration, set reasonable goals. These goals should be governed by where you live and how much time/money you are willing to spend on trips away from home. For instance if you live in Florida, and don’t plan on doing any out of State trips, you shouldn’t set a goal of harvesting a 160 class buck with your bow…..that is if you want a reasonable chance of success! On the other hand if you live in Kansas you’d be selling yourself short by setting a goal of under 150 inches.

Your goal should be realistic, and at the same time offer a decent challenge. Remember also you can change your goals as time goes on. For instance when I first started hunting thirty years ago my goal was to kill a deer with my bow. Ultimately I got that done and raised the bar to wanting to get one that would make P&Y minimums. Living in Massachusetts, as I do, that was quite a challenge, but I was willing to travel. It took a number of years but I finally managed to get the job done, and then raised the bar again to trying for a 150 class buck. It took me nineteen more years to reach that goal, now I’ve moved the bar up to 160. Perhaps I’ll live long enough to raise the bar again, we’ll see, but in the meantime I’ve set my own goals and enjoyed both the frustration and challenge of trying to meet them. You should do the same.

There is more written about hunting whitetails than any other animal, and with good reason. There are more people chasing them, and there is more money spent in their pursuit than any other species. I’m not here to tell you how to hunt them, or even where, you decide those things because it’s your hunt. I can tell you however that it is very important to set a goal for yourself and then pursue it in a way that gives you a reasonable chance of success. Check the P&Y records book and see how many animals have been taken in the area you plan to hunt that exceed your goals. If there aren’t any you need to change your plans, or your goals, to avoid failure/frustration. If you don’t want to lower your standards you’ll need to change your plans for where to hunt. Be realistic and plan carefully.

If you are limited in your hunting time, research the best time to hunt the area you plan to chase whitetails in to give yourself the best chance of success. This might be the rut, the pre-rut, the early season prior to the rut, or the late season when the bucks are back in feeding mode. Check the record books, trophy deer are taken from the first opening day in September until the last hurray in late January, and every where in between. When is the best time for you? It could be a function of when you can take time off from work, what is happening with the deer on the property where you are hunting, or pressure from other hunters. This is where research comes in handy!

When all is said and done, permission granted, stands hung, and time for you to get into your favorite stand before daylight there is still more to do. You need to be mentally prepared to get the job done. Be confident enough in your homework to believe the chance might come your way, so you can sit still and quite and wait for the deer to move. Most importantly at this point however is to know what your trophy goal is for this hunt or season. Be ready to take the fist deer that meets those standards that gives you a decent shot opportunity. The old adage, “Don’t pass a buck on the first day you’d be glad to have on the last day”, is solid advice to live by.

I can’t tell you how many guys I’ve talked to that tell stories about passing a good buck on the first day of the hunt only to go home with an un-punched tag, or a much smaller buck, at the end of the hunt/season. If your goal is any deer, or any buck, that’s fine, shoot the first one that comes by. If your goal however is a 130 class buck than shoot the first one that comes by, and pass anything smaller. Just as you can’t get to “rewind” and shoot the deer you passed two days ago, you also can’t “release” the smaller buck and reclaim your tag when a bigger one comes by later in the week. By picking realistic goals and planning your hunt around them, you have the best chance of reaching your current goal. Once you do that you can consider “raising the bar” for next season if you want to.